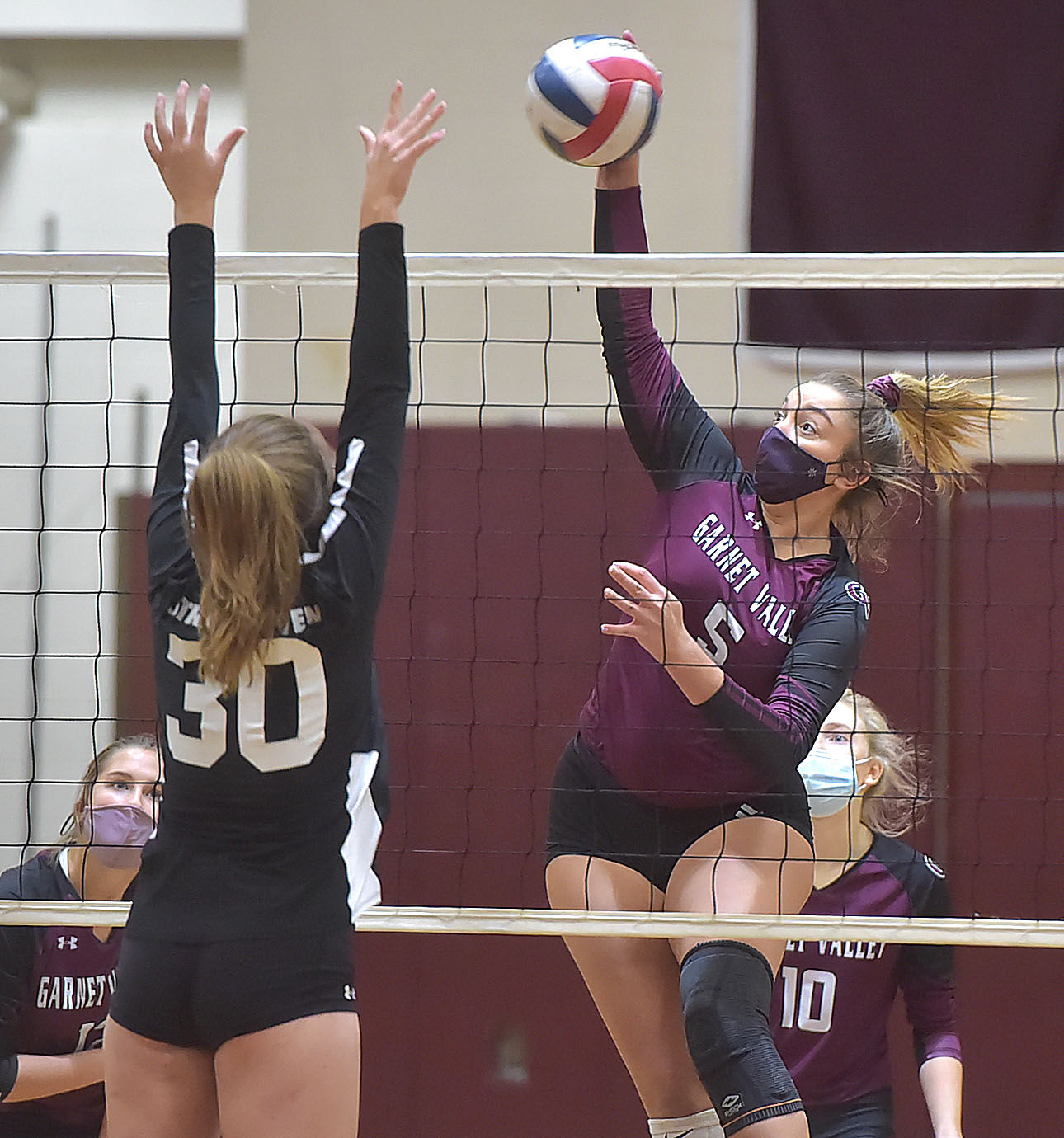 Anyone who has played volleyball for Mark Clark over the years, either at Penncrest or Garnet Valley, has heard him yell, “Little things,” from the sideline too many times to count.

“That’s his slogan,” Garnet Valley senior outside hitter Caitlyn Hagerty said. “He says that to keep us on our toes.”

With Garnet Valley trailing Lower Merion in the third set of the Central League volleyball final Saturday at the Bryant Gymnasium, Clark turned to his go-to saying more than a few times to get the Jaguars back on track mentally.

Clark would yell out those same instructions again several times in the fourth set, always with a purpose. “We’re not worrying about the big kills,” Clark said. “We’re worrying about covering our hitters, being there for the over-passes, if they happen, shifting to our proper spots on defense, calling the ball, communicating with each other, all the little things. They add up to the great passes, the great sets, the big kills. If you do all the little things correctly, everything else falls into place.”

Clark’s constant reminders paid off as the Jaguars rallied from a four-point deficit in the third set and climbed out of a three-point hole late in the fourth to win their fifth straight league title with a gritty 3-1 triumph over the Aces.

“We were making mistakes,” Hagerty said. “There were service errors, and we weren’t really playing as a team. After the second set we were like, ‘OK, let’s do this. We have to fight.’ We got back on the court and fought. We were doing the little things right, as Mr. Clark likes to say. We were talking and doing almost everything right.”

Behind the strong play of outside hitter Abbie Lane, middle hitters Jasmine Plack and Sophia Shin, setter Sara Beqiraj and libero Talia Bierschwale, and a solid defensive performance, the Aces (10-2) pushed the Jaguars (11-1) to the limit.

After winning the second set, Lower Merion had an 18-14 advantage in the third set and a 19-16 edge in the fourth set.

“Not being used to this kind of environment, not being up there before, that was a different kind of challenge for us this year,” Lower Merion coach Lauren Perri said. “The nerves, we couldn’t calm down. You could see it. There was a point in the third game where the nerves finally left and then all of the sudden came right back in one play. Trying to calm everything down, lessen the mistakes, it’s tough. Garnet’s definitely used to being and playing at this level.”

With sophomore setter Maddie Wood directing the offense and senior libero Alivia Scerba turning in another outstanding effort to lead the defense, Garnet Valley showed its championship mettle in the final two sets.

Wood had 25 of her 48 assists in the final two sets, including 17 in the fourth. Annie Bechtold (15 kills), Hagerty (12 kills, two assists), Kathryn Wright and Maya Iovacchini (eight kills each) were on the receiving of end Wood’s helpers.

“That means that 17 of our 25 points in the fourth set came on kills,” Clark said. “That’s amazing.”

The same can be said for Scerba. She was all over the court, diving for balls and instructing her teammates, to help stymie Lower Merion’s attack.

“They put up a really good block, and it was hard to get around there,” Scerba said of the Aces. “Sometimes, there’s not much you can do with a ball that goes straight down, but we kept working and toward the end we did adjust.”

“They fought back on every single play,” Hagerty added. “There were points that went back and forth like six times. We just had to stay on our toes, and I think we executed well in the end.”

When the Jaguars didn’t execute, Clark turned to his standard line as a reminder.

“I’ve been saying that for years,” Clark said. “The team that does the little things and makes the fewest number of mistakes usually wins.”