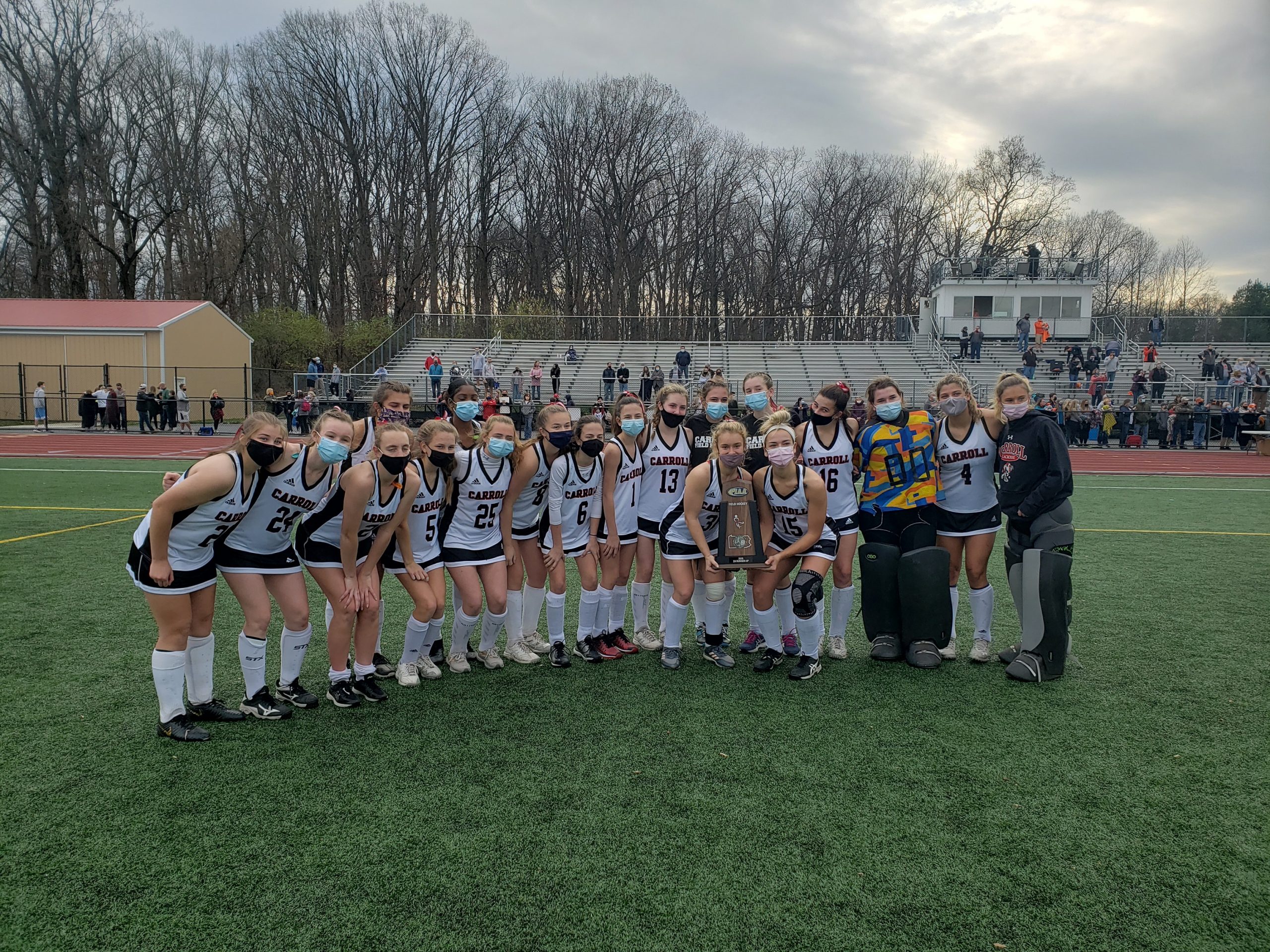 Archbishop Carroll's field hockey team poses with the runner-up trophy after a 2-1 loss to Palmyra in the PIAA Class 2A final at Whitehall High School's Zephyr Sports Complex Saturday.

WHITEHALL TWP. – Carleigh Conners harbored no illusion as to who the favorite was in Saturday’s PIAA Class 2A field hockey final.

On one side stood Palmyra, in the final for the third straight year and sixth time since winning it all in 2014. On the other was Archbishop Carroll, which before this year had never played in so much as a state semifinal.

Even as the Cougars took the lead, layered on wave after wave of pressure, shots and penalty corners aplenty, in the first half at Whitehall’s Zephyr Sports Complex, Carroll remained undaunted.

“This is a really special team and a really special group of girls, and we knew we could go a long way,” Conners said. “Here we are, second place in the state tournament. We’re just so proud of this. This is the first time Carroll has ever been in this position, so we’re really grateful to be here. It’s not the outcome we wanted, but we know we deserved to be here.”

Thats the winner!
Keith makes the first save but Anna Miller is there to poke home the rebound.
Palmyra 2, Archbishop Carroll 1 pic.twitter.com/TmSKdezv3M

Palmyra went ahead in the second quarter, cashing in via Keely Bowers after six fruitless corners. Undaunted, Carroll tipped the game back in its favor in the second half, cashing in when Sienna Golden poked home a goal off Carroll’s second and final penalty corner with 6:10 left in the third.

The fourth quarter was finely poised, the battle mostly in midfield and occasionally chaotic. Miller ended it 65 seconds into the 7-on-7 overtime. On Palmyra’s 10th corner, goalie Courtney Keith made her fourth save of the day, diving with an outstretched palm to deaden Miller’s initial effort, set up by a reverse sweep by Alexa Derr. Archbishop Carroll’s Sienna Golden, arms raised and Cate McConaghy celebrate a goal against Southern Lehigh. Golden scored the only goal as the Patriots fell to Palmyra in overtime, 2-1, in the PIAA Class 2A championship game Saturday. (Pete Bannan/MediaNews Group)

The ball hung on the goal line for what seemed like an eternity, Keith frantically trying to right herself and paddle the ball out of trouble and defender Courtland Schumacher scrambling. But Miller was on the spot, the junior forward keeping her head and flicking it over two Carroll players into the cage.

“There’s a lot of pressure,” said Miller, who had to state her case just to get on the field for 7-on-7, no mean feat given the Cougars’ depth. “I knew that was a chance that we had to score, and I had to take it. After the goalie made the first save, I was like, OK, just pull it back, lift it into the cage. It’s a lot of pressure to go to my reverse stick because the goalie could just hit it away, but I feel like I did it fast enough that I could get it over the goalie.”

“We work as a team. That was just a good goal by Palmyra,” Conners said. “Props to them, they finished the job.”

Neither history, nor the first half, favored the Patriots. Carroll is the first District 12 team (since the district was re-designated as Philadelphia in the early 2000s) and the first Catholic League team to play for a PIAA field hockey title, even as this year’s state tournament was limited due to COVID-19 considerations to only district champs. Carroll is the first Delco team to reach a field hockey final since Ridley in 1995. (Only two, Haverford in 1975 and 1982, have lifted the trophy.)

District 3 powerhouse Palmyra lost in the final to Wyoming Valley West last year and in overtime to Donegal in 2018, part of two of the four PIAA finals to require overtime in the last three years.

If anyone assumed the track record meant Palmyra would run away and hide after Bowers’ opener, they were wrong. Though unfortunate not to have gotten a goal before that, Derr twice striking the post to Keith’s right, the breakthrough was unlucky for Carroll. Defender Nicole Pawelec, who had a huge defensive save, knocked down a lofted shot by Maddie Hudson, but it fell to Bowers to sweep home.

Carroll, with Conners marshaling a team that stresses positivity and whose huddle-breaking mantra is “unit,” didn’t bend.

“When they scored in the first half, it kind of came across to us as, ‘this isn’t it. It’s 0-0,’” Conners said. “Every time someone scores on us, which hasn’t been a lot, we just go into the mindset of, it’s 0-0. We’ve got to come back stronger and they think they have the game together and it’s their game, but we controlled the second half.”

Conners was massive, running the game from deep in midfield. The 5-9 ½ James Madison signee exploited a pronounced height edge in a sport where that rarely matters. She also set up the equalizer, playing the corner that Grace O’Neill returned to her near the end line and inputting a dangerous ball across the cage that Golden, a freshman, turned home.

They were, even if Palmyra was on the front foot for much of the fourth. Katie Lintz fired a long-range shot just wide. Conners smothered a corner, as did Schumacher later. Carroll began to shift possession, but only one long-range shot resulted. And in overtime, Palmyra didn’t need to be told twice to capitalize on its chance.

A defensive save by Nicole Pawelec, then Courtney Keith a denial. Carroll living dangerously pic.twitter.com/3qMDan8P42

It left Carroll with silver medals, not the color they preferred at the beginning of the day but ones they accepted as an unqualified success in the big picture … for what they hope is not the last time.

“I think it gives a head start to Carroll,” Conners said. “It increases the athletes coming in to play field hockey. Sienna Golden is a phenomenal player. The sophomores – Cate (McConaghy), Courtland was back on the defensive line – I just really think this is the start to Carroll field hockey. We’re going to be here again.”