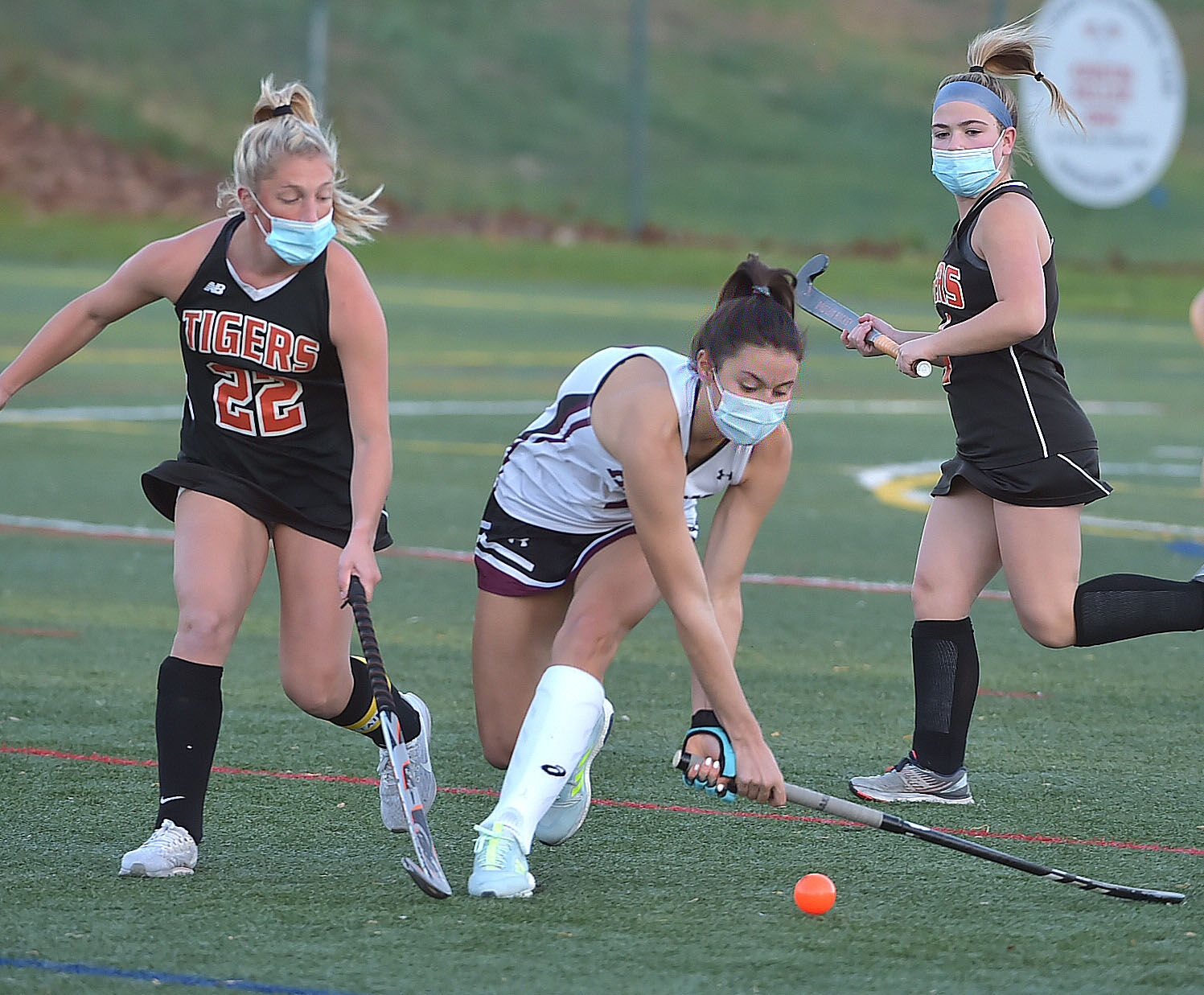 Radnor's Hope Delaney, center, in action against Marple Newtown earlier in the week, scored the only goal as Radnor fell to Conestoga, 4-1, in the Central League championship game Saturday. (Pete Bannan/MediaNews Group)

Galica, who also is an outstanding lacrosse player, must have had plenty of energy saved up after she was unable to play her spring sport when the 2020 season was cancelled in March by the coronavirus pandemic.

There were times when she wasn’t sure there would be a 2020 field hockey season before those in charge of the Central League agreed that the teams would play against each other and then have a postseason tournament, which concluded Saturday at Teamer Field as the top-seeded Pioneers polished off their unbeaten campaign (12-0) with a 4-1 decision over No. 3 Radnor (9-3).

Galica scored a goal in each of the two quarters that made up the first half, and senior teammates Caroline Wisch and Jessica Mullin added goals in the second half to give coach Regan Marscher’s squad the playoff championship.

Junior Hope Delaney picked up Radnor’s only goal late in the second quarter, cutting ’Stoga’s lead in half. Pioneers freshman goalie Alex Lepore had to make only two saves after halftime despite the Raiders’ 5-2 advantage in penalty corners in the final two quarters.

“We came to play, but it just didn’t happen for us,” Radnor coach Katie Maguire said.

Conestoga’s Marscher was pleased that there was a game Saturday.

“We did whatever work we could trying to get ready in case we would be allowed to have a season,” she said.

“We were blessed to be able to do what we did, even if it was just getting the chance to get to play against the other teams in the Central League.”

The Pioneers dominated the first 15 minutes. Galica took a penalty stroke in the eighth minute, but Raiders goalie Rory Harper stayed with the low shot and blocked it away. About 4½ minutes later, Galica got her stick on the ball and finished off a play initiated with a penalty corner.

“I think it was Carly Hynd who had hit the ball,” Galica said. “I was the one who tipped it in.”

In the third minute of the second session, a Conestoga shot was stopped short of the goal line before Galica appeared to claim the ball and put it into the back of the cage.

“They had two girls on the ball, but I was able to lift it over their defenders,” she said. “We scrimmaged against Radnor earlier but we didn’t have the chance to play a game against them. We knew that if they beat Garnet Valley we would have to play well against them here today.”

Eight minutes after Galica’s second goal, Radnor’s Delaney finished off a penalty corner play with a sharp reverse drive on which Lepore had no chance to make a save.

“We were very happy that we were able to play,” said Delaney, who has committed to Princeton University. “We had fun in the playoffs, and it was great feeling winning the other night (over No. 2 seed Garnet Valley) and getting to play in this game.”

Radnor had the advantage in the third quarter until Wisch claimed the ball on a pass that was knocked down by a Radnor defender and wound up tipping in her goal.

Early in the last stanza it was Mullin setting the final score with the fourth Pioneers goal. The final Conestoga numbers for 12 games were remarkable: 84 goals for and only four goals against.

“This turned into a big year for us once we got the chance to play,” said Hynd, a Maryland commit who served with Mullin, Sofia Ries, who was solid on defense, and midfielder Amanda Foster as as a team captains, said. “We knew we would have to work together week after week and do the best we could.”

After Saturday’s performance, the Pioneers believe that they accomplished their mission during the 2020 season.