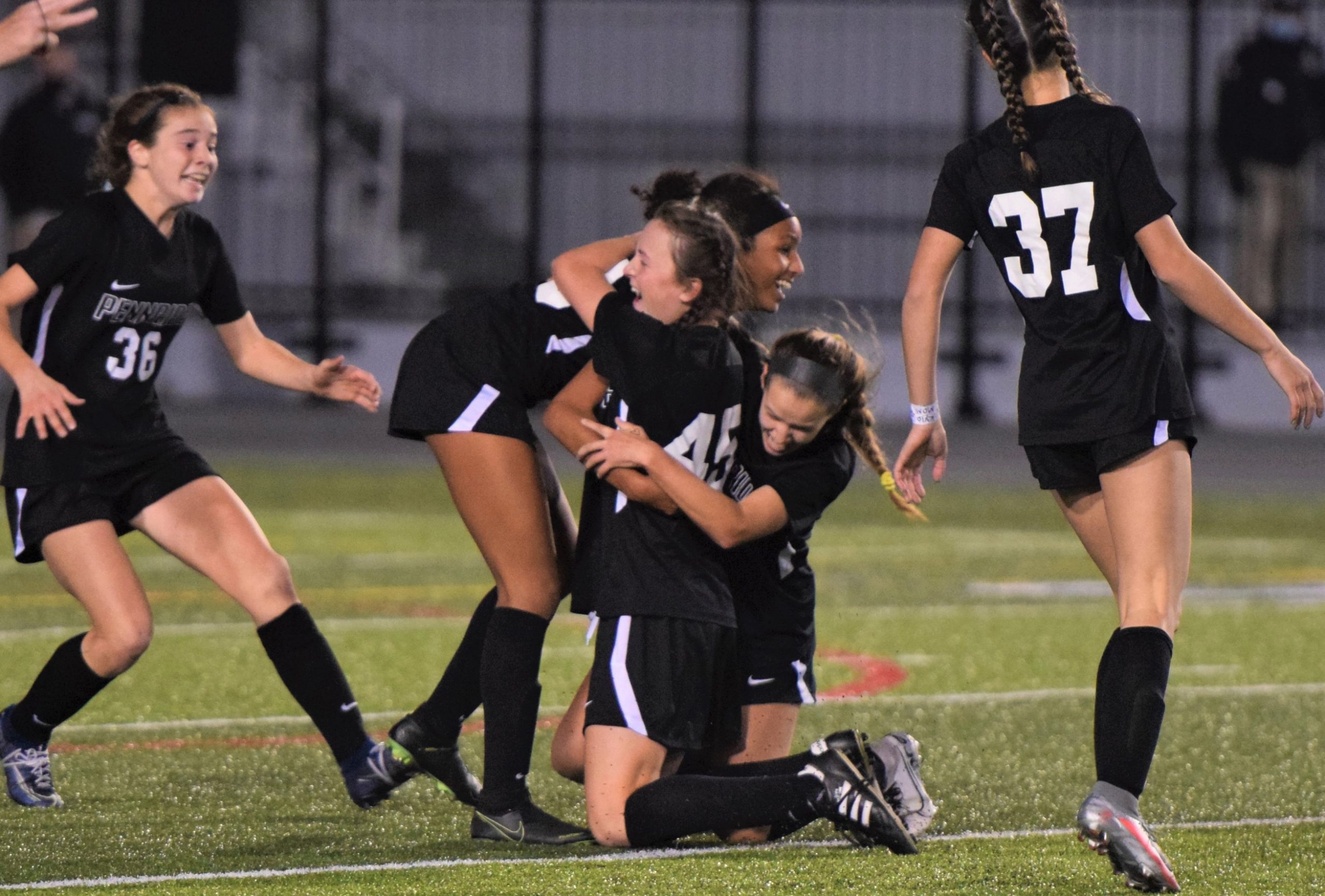 Pennridge's Leah Malone, center, is congratulated by teammates after scoring the game-winning goal in overtime of the PIAA 4A championship game against North Allegheny. (Austin Hertzog - MediaNews Group)

HERSHEY >> It was a dream delivered, just two years after the fact.

In 2018, Pennridge girls soccer coach Audrey Anderson had a dream that Leah Malone was going to score a state-title winning goal. It didn’t play out that way as the Rams fell to Souderton in overtime, but there’s no time limit on when a dream can become reality.

The dream was delivered for Anderson, Malone and the rest of the Rams when the junior’s brilliant strike with 13:43 left in double overtime beat North Allegheny 1-0 and gave Pennridge its first state title on Saturday night at HersheyPark Stadium.

“I found the ball at my foot and in a game like this, especially with time running down, you have to make the most of all your opportunities,” Malone said. “I found myself outside the 18 with a little bit of space and you might as well test your luck and take a shot at the point. I got a lot on it and hit it pretty well.” Malone’s goal was the first for the program in the state title match, with 1-0 setbacks coming against Peters Township in 2011 and 1-0 against Souderton in 2018. The strike, a right-footed effort that Malone crushed on a rope just inside the far post not only delivered a title but capped a resilient effort for the resilient Rams.

“I guess I was two years too early,” Anderson said. “It’s just incredible. This whole season, they fought so hard for every single game.”

With four freshmen in the starting lineup, a converted field player in goal and two of their captains sitting on the bench due to injuries, the Rams rallied and overcame this fall.

“I think a lot of people were saying there would be an asterisk around it,” junior goalkeeper Sierra Shaeffer said. “I feel like this is by far the hardest year you could get.” The Pennridge girls soccer team poses after winning the PIAA 4A championship on Nov. 21 in Hershey. (Austin Hertzog – MediaNews Group)ds

North Allegheny, which was making its first appearance in the state final, put the Rams to the test. Led by stellar senior Sarah Schupansky, a Pitt recruit, and a rugged, physical defense, the Tigers asked plenty of questions both offensively and defensively toward Pennridge.

Shaeffer, who posted her eighth shutout of the year, had full command of her defense and the back four of Kera Dam, Cady McKean, Anna Croyle and Casey Malone turned in one of their best outings of the fall. Croyle, a freshman, and McKean, a senior, were especially good at center back dealing with the trickery and skill of Schupansky.

McKean, off to King’s College, said communication was the secret weapon.

“I felt like I was annoying them, I talked nonstop,” McKean said. “It just worked out, we were all talking through it the whole game.”

Chances were scarce in the regulation, but those that did come were good ones. Speedster Lucia Wells forced Shaeffer into an early save and a dangerous rebound but the Rams were able to clear it for a corner before Wells could follow-up.

Malone meanwhile, announced herself early with a rocket of a shot that rattled the NA crossbar. The junior was involved in quite a few of the Rams’ chances but also had plenty to do defensively by tracking back and helping the defenders win the ball back.

“Not getting frustrated was the most important part,” Malone said. “As soon as you get frustrated, that’s when you’re losing yourself and you play your worst when you’re overly frustrated. Your mentality has to be straightforward the entire game, you have to be positive and think you’re going to get those opportunities and shots if you work for it.”

North Allegheny’s best opportunity came off a corner around the midpoint of the second half off a corner kick. Schupansky put the ball right on the money and a frantic, chaotic scramble ensued that ended with Pennridge eventually sending the ball away but only after a few blocks and kicks off the line. Pennridge goalie Sierra Shaeffer and defender Cady McKean dive into the shot of North Allegheny’s Anna Bundy to block it in the penalty area during the PIAA 4A championship game in Hershey on Nov. 21. (Austin Hertzog – MediaNews Group)

Shaeffer and Croyle couldn’t figure out how it happened, only that they had stopped the ball from going in the goal.

“It was insane,” Shaeffer said. “It hit my leg, there was a clearance by one of the defenders, every time it came into the box, someone cleared it out. It took my breath away, after I thought ‘I can’t believe that just happened.’”

“I saw everyone just kicking back and forth so I stood on the goal line waiting for something to come out so I could block it,” Croyle said. “It was just chaos.”

Tigers keeper Megan Miller was a thorn in the Rams’ side most of the night, making eight saves including a double-denial on Liv Grenda and Joey Tomlinson just before the corner chaos and on Lindsey DeHaven late in the first overtime.

DeHaven, playing her final game for Pennridge, gave all she could plus a little more. The co-captain midfielder pulled her hamstring sometime during the game and just kept going, doing her usual act of winning the ball on the ground and in the air while chipping in chances and defensive cover.

“It was definitely very difficult, going into the second overtime we were all very tired,” DeHaven said. “With what was on the line this game, the state championship and making history for our school, I think everybody wanted it so badly they weren’t willing to give up.”

The Rams didn’t need to look far for inspiration either. On the tape around their wrists, each player had written a list of the people and things they were playing for while they had also drawn a small heart on their right hands between the thumb and index finger. On the bench, their teammates were a constant well of support and off the bench, players like Sophie Craig and Joey Tomlinson brought excess energy and bought starters key minutes of rest.

“We worked so hard this season, we all wanted it super-bad and all we had to do was put one goal in the back of the net,” Tomlinson said. “We definitely worked hard. It was so tiring but I think we all left it on the field tonight.”

Even as the chances failed to go in, like Casey Malone and Croyle’s takes in the second half or DeHaven’s well-hit ball in the first overtime, the Rams just kept working.

“I’m speechless, I’m overwhelmed a little bit, it’s like I can’t believe it happened and I keep telling Leah ‘I can’t believe you just did that,’” DeHaven said. “It’s amazing, I’m so proud of this team right now.” There were plenty of plaudits from Anderson for her team and its effort. Despite everything the season threw at them, the Rams stayed together, weathered a difficult path through the postseason

“They understood it could end and any moment and recognized that they had this goal of wanting to be there at the end playing,” Anderson said. “We recognized if luck was on our side and we got to play, we were going to be a much stronger as a team than we would just playing for ourselves.”

Anderson saw an old dream come to fruition on Saturday but Malone felt like she hadn’t woken up to realize it yet. Once the through ball from Tori Angelo found her feet and she took her touch toward goal, the rest went by a light-speed for Malone

Asked if she had heard the teammate imploring her to shoot seconds before the winner, Malone gave a shrug.

“I probably did but honestly, it’s all a blur at this point,” Malone said. “it just feels so good. It’s surreal, it’s like it didn’t even happen yet.” The Pennridge girls soccer team celebrates after winning the PIAA 4A championship over North Allegheny on Nov. 21 in Hershey. (Austin Hertzog – MediaNews Group)