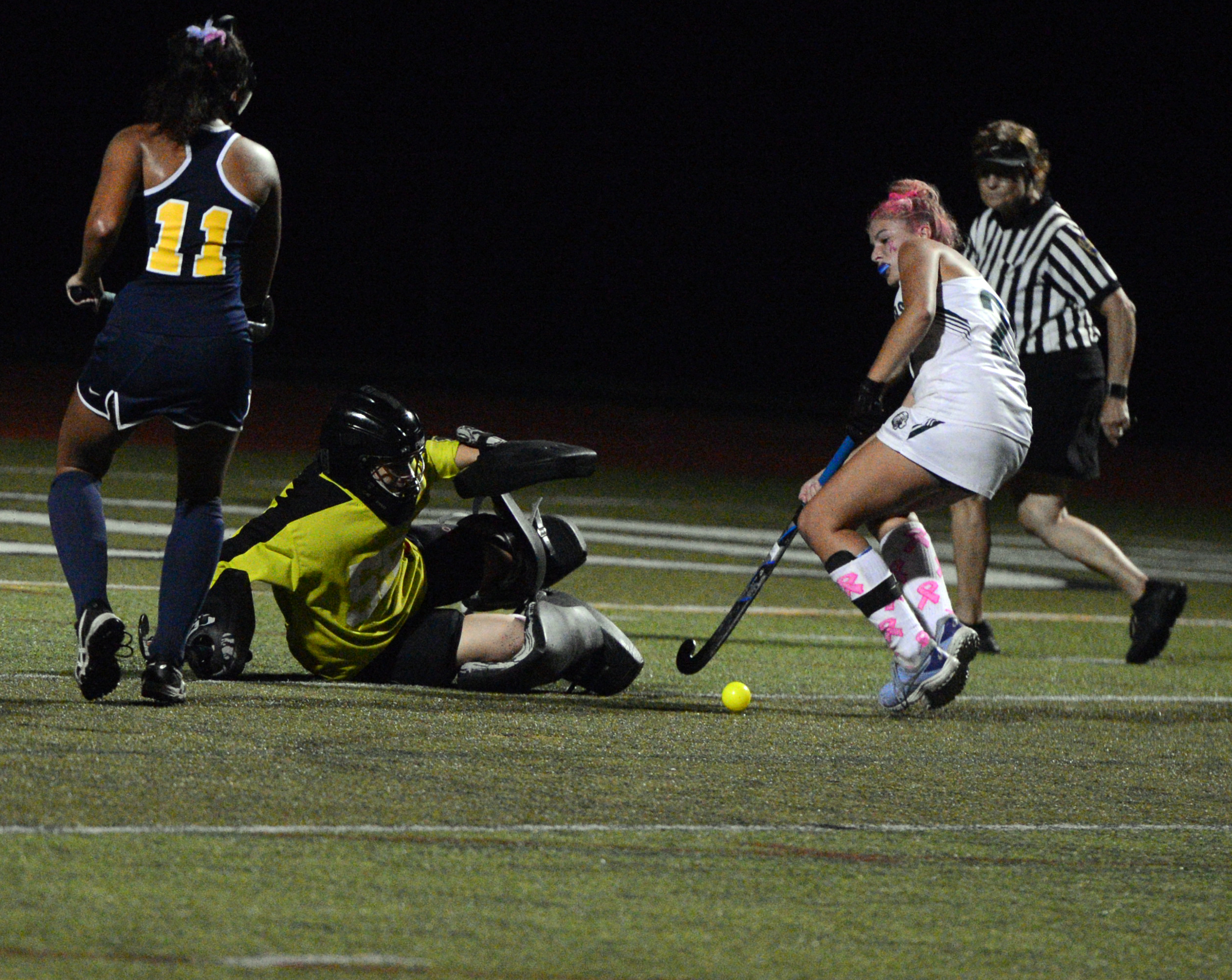 FAIRVIEW VILLAGE >> For the second time this season, Methacton and Upper Perkiomen were set to decide who the best team in the Pioneer Athletic Conference is this season when they met up under the lights Wednesday night.

For the second time this season they did not, finishing in a 2-2 draw Wednesday, 16 days after tying 1-1 in overtime in their original matchup for first place Oct. 5.

FINAL: Methacton 2, Upper Perk 2 … PAC’s top two teams end in a tie once again. Lynnsi Joyce with another big stop here that saved it for UP. pic.twitter.com/kktc4eHCgJ

After eight periods and two overtimes in two meetings, Warriors’ coach Amanda Fuertsch and Upper Perk coach Jamie Warren were inquiring about when/how they could set up a Game 3.

“It was frustrating a little bit, but I’m just really happy with how we played because we definitely did dominate both games I think,” said Methacton sophomore Elise Dewan, who had her nose bandaged and a new jersey on by game’s end after getting hit in the face. “We were wanting to come out with this win, but it’s OK because we have a lot to take away from it and move on with the rest of the season and postseason hopefully.”

Methacton (5-1-2) trailed Upper Perk (7-0-2) by a game and a half in the PAC standings entering Wednesday’s contest with one more game left on its schedule than the Indians.

A win by either team would have put that squad in prime position to claim a league championship at the end of the season. The PAC Final Four was cancelled this season due to scheduling and health and safety concerns caused by COVID-19, so the team with the best regular-season record will be crowned conference champion.

“I’m kind of mad because I know we had the potential to win both games, and we didn’t finish them,” Carpenter said.

Carpenter ties it 2-2 with 1:47 to go. pic.twitter.com/eNgagQbfgX

Gooch scored less than 32 seconds into the game off an assist by Margo May. The Indians held a 1-0 lead until DeWan scored on a corner off an assist from Jess Serafin with 38 seconds remaining in the first half.

After a scoreless third, Methacton seemed to have found the winner late in the fourth when Noh put one in the back of the cage with just more than three minutes left. However, the celebration was short lived.

The Indians responded right away, earning a corner of their own . Carpenter was denied by DiPRinzio on the first try, but she collected her own rebound and skimmed the ball under the top post to knot the game 2-2 with 1:47 to play.

“It’s important those two minutes after the other team scores just to get the momentum back and keep going,” Carpenter said. “Both goals we scored on were messed up inserts, so then we just finished on the messed up corner.”

HALF: Methacton 1, Upper Perk 1 … Elise DeWan scores a goal with 37 seconds left in first half on a corner she helped set up. pic.twitter.com/sAhxNmJaYH

DeWan, who sprinted the length of the field on multiple occasions to stop UP fast breaks, and Kristen Riddell were sharp on the back end for the Warriors to keep most of the play toward the Indians’ goal late in the game. DeWan said the chemistry between herself, Riddell and DiPrinzio in their second year playing together has been crucial to their success this year.

Methacton held the advantage in shots on goal (25-10) and corners (14-4) in the team’s first meeting, and that was the case again Wednesday when the Warriors had 17 shots on goal and 13 corners compered to seven and five or the Indians. The Warriors earned five of those corners and three shots on goal in the overtime period.

Noh and Alexa Kratz tried on multiple occasions to win the game in overtime for Methacton, but whether the ball found one of Joyce’s pads — even once hitting of her goalie mask — or trickled wide of the net, the game-winner would just not go in for the Warriors for the second straight game against Upper Perk.

“You want it so bad, especially from the back because I’m not always up there seeing it all happen,” DeWan said. “I know we gave it our all. The ones that did go in, it was fun to celebrate. We just have to get some more in.”

The Indians had some quality chances of their own in OT, including a shot by Luci Carpenter that trickled past the post of a wide open net after DiPrinzio had sprawled out for a save attempt, but Upper Perk’s calling card Wednesday — as has been the case all season — was its defense in crucial moments.

Methacton’s two goals are the most Upper Perk has let up all season. The Indians had recorded four straight shutouts entering Wednesday’s game and have allowed just three goals in their seven games against opponents not named Methacton.

“We just have a lot of heart to keep going and not give up,” Bella Carpenter said. “Plus our defense has been doing really well lately.”

“Both goalkeepers are very skilled, so it was tough to move them and get it in,” she added. “Lindsay’s amazing.”

UP won last year’s PAC title, and with wins in its next three game will have a chance to win consecutive league championships for the first time.

The Indians finish with rematches against Spring-Ford (2-6-1), Owen J. Roberts (6-3) and Perkiomen Valley (5-3-1) who they’ve all previously beaten by two-or-more goals.

“I’m pretty excited,” Bella Carpenter said. “I was hoping we’d win this game and then we had it secured, but we gotta keep going and I’m looking forward to the next big games because we play Owen J., Spring-Ford and PV again. Those will be tough games, but I think we can pull it off.’”

Joyce kick save on the corner. pic.twitter.com/31HmRzInW7

Because of its 2-1 loss to OJR last week, Methacton needs to win out or have UP drop one or more of its games to claim at least a share of the PAC championship for the first time since 2017 and second time since joining the league.

NOTES >> Fuertsch pointed back to her team’s participation in virtual activities back during quarantine in the spring as the main reason why her group is in a position to compete for a league title this season. “Just the fact that they were so involved in all of those things in a time when field hockey really didn’t matter and they could have totally just ghosted me and the other coaches, but they went all in.”