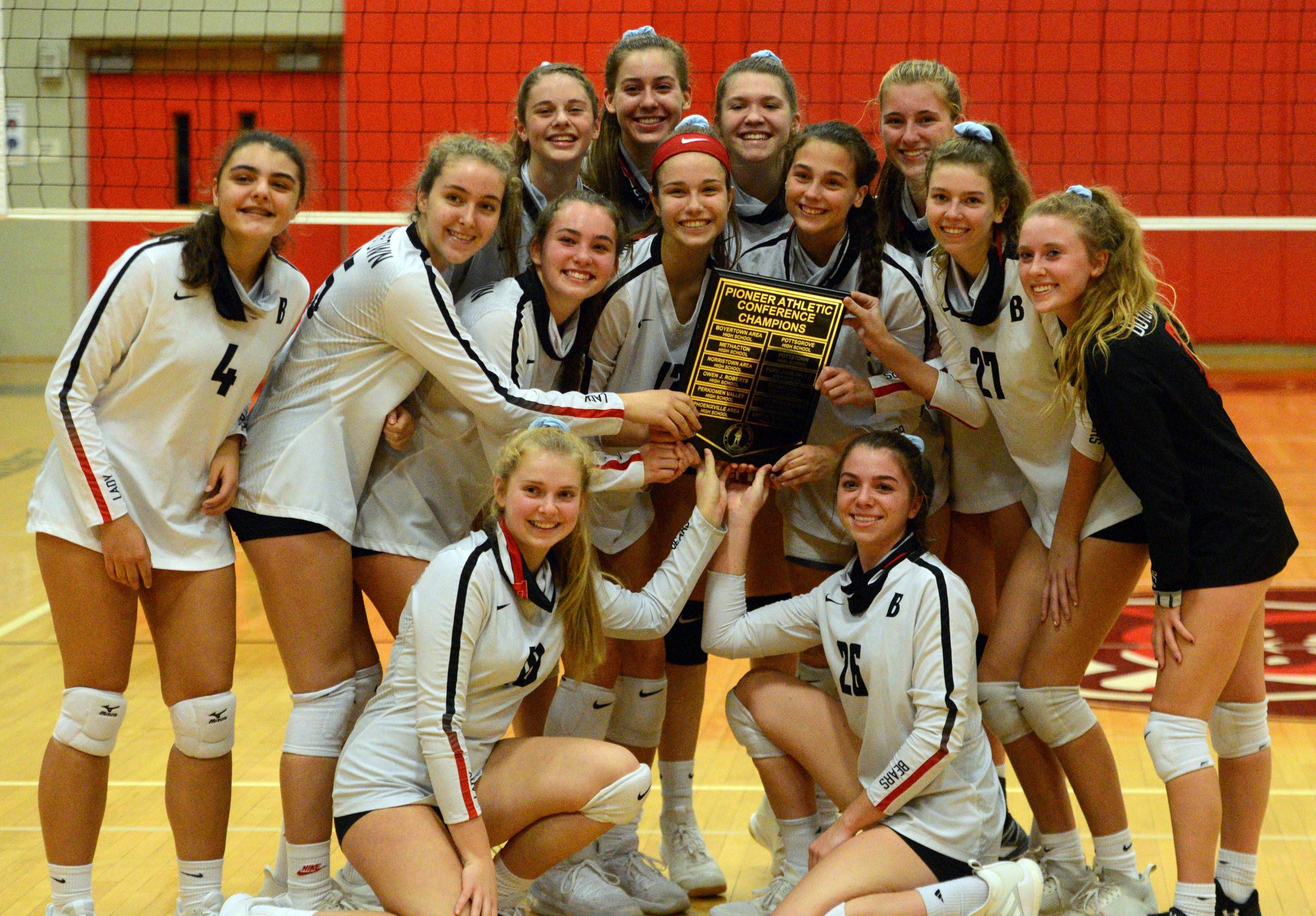 BOYERTOWN >> The COVID-19 pandemic has taken away many of the norms from the 2020 girls volleyball season, including the Pioneer Athletic Conference Final Four.

While Boyertown didn’t have a chance to play an official championship game — instead wrapping up the program’s first league title with a 3-0 win over Pottsgrove on Wednesday — the Bears’ title celebration had at least one familiar site.

Boyertown seniors Emma Ludwig, Alexa Mack, Logan Black and Kaitlynn Ott were able to hold the PAC championship plaque and pose for celebratory pics with the hardware to mark the special occasion.

“Thrilling. That’s the only word I can use to describe it,” Emma Ludwig said of what it was like to receive the championship plaque. “I think we all weren’t expecting (the championship plaque) to be here today as PV was still playing today and we had to play it out to win. It was just amazing that it was here and to have it in our hands when it happened.”

“In this weird world we live in without Final Fours, you want them to experience as much of it as they can,” Bears’ head coach Mike  Ludwig said. “It was really nice, you can see it on their faces that it meant a lot to them.”

The Bears’ four seniors were freshmen during Boyertown’s inaugural PAC season in 2017, when the team went 5-9 in the league.

Even without a championship format or atmosphere on Wednesday, the Bears were appreciative of the opportunity to cement the strides they’ve taken over the past four years with the program’s first PAC title.

“Honestly, it was just so much emotion,” Black said. “I wanted to cry. I wanted to scream. It was just so amazing because you work four years for this and then you think because of corona and everything it’s all just going to go away. The fact that we actually got it, is just unreal.”

“It’s not a normal year, it’s not what we would have wanted out of it, but we worked hard, we got what we wanted and it’s absolutely exciting to be able to do it with our team,” Emma Ludwig added.

After Boyertown survived a five-setter against Methacton on Monday to stay in first place, Pottsgrove made sure the Bears’ championship was well-earned on Wednesday.

The Bears won a tight first set 25-17. The two teams were tied 16-16 in the second set before Boyertown sneaked out with a 25-22 to win to build a two-set lead. Led by Ludwig and some powerful spikes from junior Adrianna Derstine, Boyertown cruised to a 25-12 win in the third to clinch the match and PAC title.

“I think it’s just a confidence thing,” Emma Ludwig said. “You come into it wanting to win and really wanting it, but you never know. Volleyball’s a game where you never know what’s going to happen and you have to play for every single set, every single point. Once we finally realized what was coming our way at the end, it was just an extra drive to get and finish it out.”

Pottsgrove’s (2-7) volleyball program also joined the PAC in 2017-18. The Falcons’ improvements haven’t been as obvious this season as they play mostly the league’s bigger schools in a COVID-caused reconfigured PAC that ditched the two-division format.

The Falcons began their first two seasons in the PAC with an 0-27 record, but have totaled five wins the last two seasons and still have two contests left on their schedule, finishing their season with two games against Phoenixville, which recently returned to competition.

“They are so scrappy. You saw that tonight,” Pottsgrove coach Jaime Reinhart said. “They have the biggest hearts I’ve ever seen. Their resilience is just off the charts. They’re awesome. This is only our fourth year as a program, and they are doing so much better than I could have ever expected against these big schools.”

The Boyertown girls volleyball team celebrates a points during its win against Pottsgrove on Wednesday. (Owen McCue – MediaNews Group)

Boyertown has two games left before heading to the District 1 Class 4A tournament.

The Bears won’t have a chance to play in the league’s traditional Final Four format in 2020, but they still have two big matches at the end of this week that could make a special season even more special.

Boyertown will play the PAC’s last two league champions, facing Upper Merion on Thursday before traveling to PJP in a rematch of last year’s title game on Friday.

“We’re so excited,” Black said. “We want to prove that it doesn’t matter just because they weren’t in the PAC. We’re just good a team as they are and it’s kind of our revenge from last year’s PAC final.”

“It’s definitely exciting,” Emma Ludwig added. “We get to show them what we got, and the season isn’t over yet. We still have a lot more to go.”

However his team finishes, Mike Ludwig is appreciative of the what his senior class has done for the program.

“It’s been amazing to watch the team grow as a unit, and obviously they were a big force behind the early success because of their enthusiasm for the game,” Mike Ludwig said. “They went out and found ways to get better, and that allowed our program to grow and then made great friendships with younger kids and brought them along. It’s been a really incredible journey to go through with this team. To see them grow as young ladies and volleyball players, it’s just been awesome.”