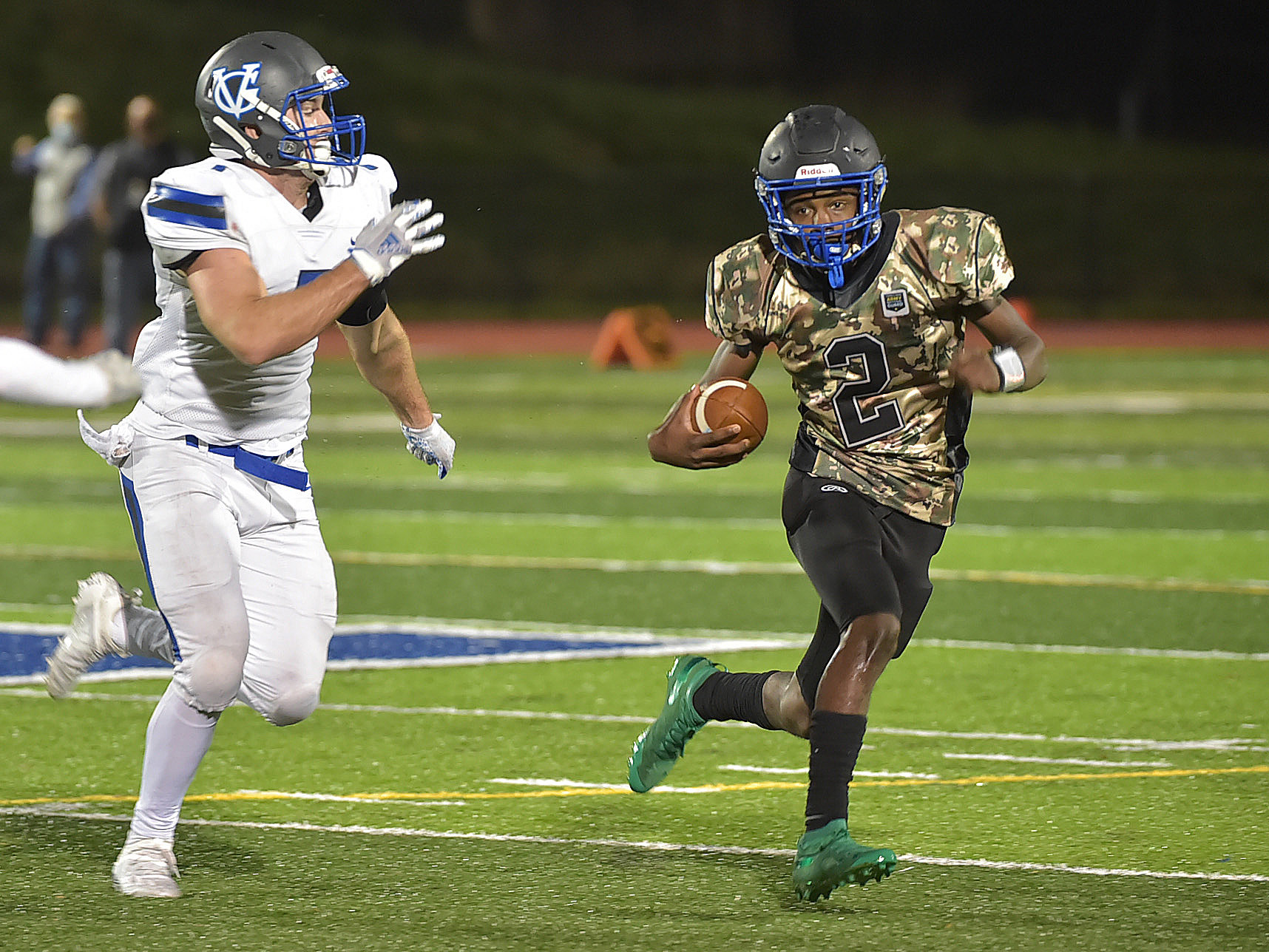 The Kennett football squad got off to another quick, impressive start on Friday.

But unlike what happened in the second half of their season opener a week earlier, the Blue Demons finished strong, putting the finishing touches on a 28-0 shutout triumph over visiting Great Valley in a key Ches-Mont American clash.

“We were dominant in the first three quarters last week and then we fell apart,” said Kennett head coach Lance Frazier.

“Those guys dug deep tonight. It is incredible to see the growth and the response. That is what you are looking for as a coach.”

Now 2-0, Kennett scored the first 22 points a week earlier at West Chester Henderson, but had to hang on for an eight-point win. This time, the Demons raced out to an early lead and then relied on its defense to blank the Patriots (1-1) the rest of the way.

“Henderson almost came back on us and our coaches really got on us in practice,” said runner Julian Sparacino, who finished with 71 yards on 19 carries and scored two touchdowns.

“I think we have the best defense in the Ches-Mont.”

And Kennett did it all without star quarterback/cornerback Sam Forte, who has yet to play this season due to personal issues.

“Sam has things going on that we don’t want to discuss, but we expect him to be back,” Frazier said.

So for the second straight game, Kalen Frazier filled in admirably under center, engineering three lengthy scoring drives, including a 12-play, 60-yard second half march that put the Pats away for good.

“Kennett is a good football team. We needed to do a better job on (Frazier) – he did a heck of a job,” said Great Valley head coach Jeff Martin.

“Kalin is just trying to navigate his way through as our emergency backup,” added his dad and head coach. “I’ve always told him he should be quarterback, but he didn’t like the position.

“He knows the game, but he wants to be a receiver and score the touchdowns rather than throw the pass. But he’s shocked us – where is this coming from?”

The Demons scored touchdowns on their first three possessions, including drives covering 55 and 44 yards, and another following the Patriots’ turnover deep in their own end. Sparacino accounted for 43 yards – including a short scoring run – on the opening series, and then Frazier found fullback Connor Jung for a 23-yard aerial strike.

A botched option play by the Pats was then recovered by linebacker Richie Hughson, and four plays later Sparacino found the end zone from eight-yards out to make it 20-0.

Great Valley threatened to score at the end of the first half, marching 61-yards on 14 plays. But on fourth and goal at the two, Kennett stopped Pats quarterback Andy Talone short of the goal line with 11.4 seconds on the clock.

“That goal line stand before the half was huge,” Frazier said. “Our defense stepped up and we never looked back after that.

“Anything Kennett does in football is a surprise. And with the success we’ve had over the last two years, we are still not getting respect. But I like it like that. Eventually, we’ll get recognized and I won’t like it because I like to sneak up on people.”

“Coach Frazier has done a great job with his program over the last few years,” Martin said. “They play sound football and they are going the right direction.

“I thought we did some good things at times, but we just shot ourselves in the foot a few times. We had an opportunity to score at the end of the half – we have to get in the end zone.”

“It’s frustrating, but we will learn from this and get better.”

In the final minute of the contest, it was announced that Frazier had been named the 2019-20 Pennsylvania Coach of the Year by the National Federation of State High School Associations. His team promptly mobbed him on the sidelines.

“I had no idea,” Frazier said. “To be honest, I thought I was getting arrested. My quality control coach told me, ‘we need a timeout right now.’ And I said, ‘are you crazy?’ And he said, ‘coach, trust me, you need to call a timeout.’”

That’s when the award was announced.

“It was a great bow on top of what we’ve been able to accomplish here with the culture,” he said. “But that’s not a ‘me’ award. We have a tremendous staff and kids who have been starving for greatness for a number of years.

“It’s fantastic. I don’t know what to say. But it was great to be embraced by the guys, and for them to know that they played a main part in this.”

Sparacino added: “I’m not surprised at all. He’s turned a losing program into a winning one.”

During the Covid pandemic the locker room is just beyond the end zone for Great Valley players visiting Kennett Friday. (PETE BANNAN – MNG)