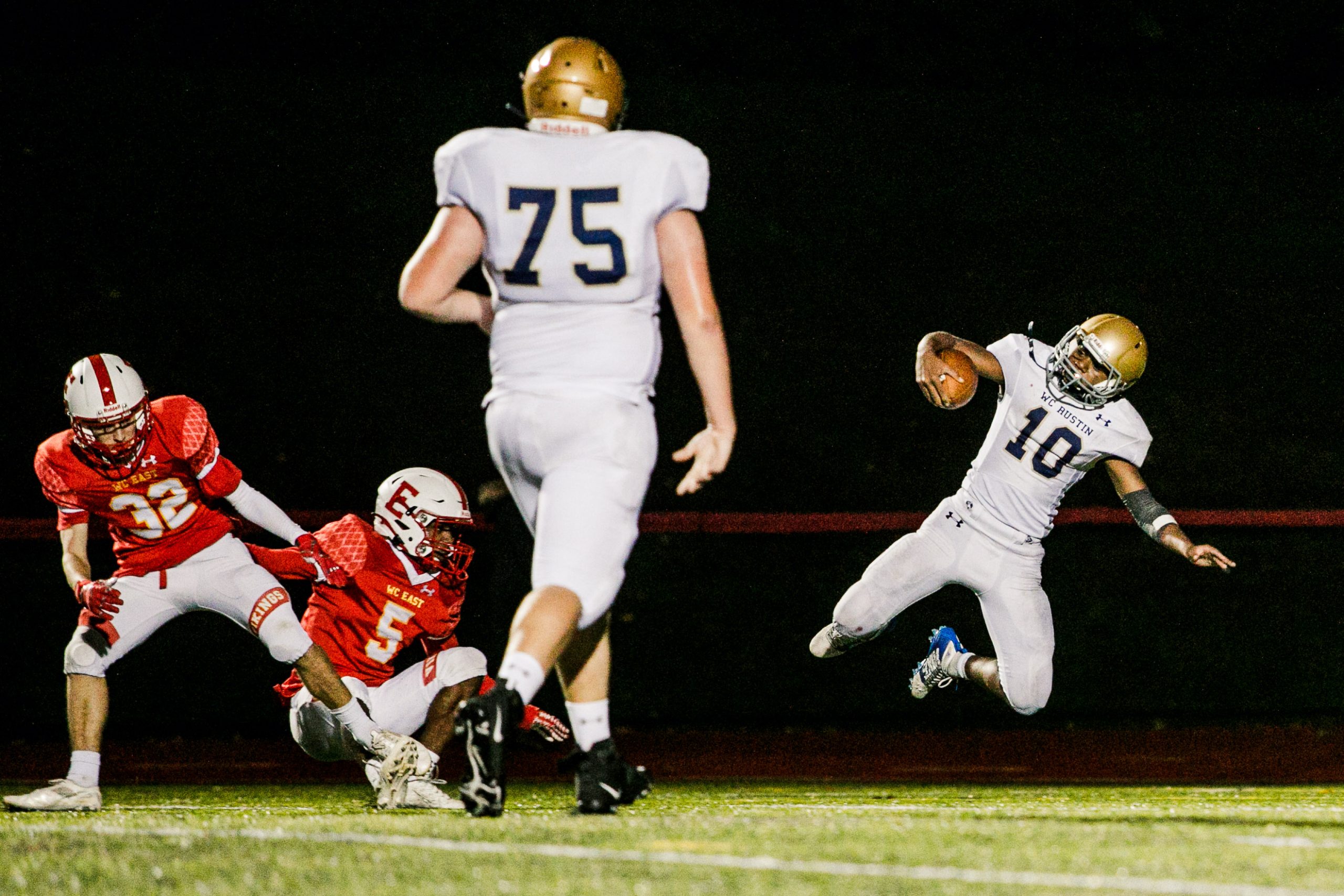 He figured he’d contribute at cornerback and returning kicks, and while he opened the 2020 season last week with a 98-yard kick return on the first play, he finished week two against West Chester East with a pair of emphatic touchdowns, fully embracing his expanded role.

With running backs Drew Gallen lost to injury in the preseason, and Alex Pratzner injured a week ago, Jacobs stepped alongside of Tucker Flynn to give Rustin a one-two punch that resulted in over 300 combined yards in a 27-13 win over the hosting Vikings.

Jacobs ran for 78 of his 129 yards in the fourth quarter, slamming the door shut on West Chester East (1-1 American Division, 1-1 overall) with two scores.

The postgame huddles went as expected, with Rustin (1-1, 1-1) loud and jubilant after a good win, and East solemn and silent after a winnable game slipped away.

“We were so excited because there’s pretty strong feelings between the two teams,” Rustin coach Mike St. Clair said. “We were a little disappointed with our outing last week (against Unionville) and we wanted to make sure Rustin football played Rustin football.”

While the Golden Knights finished drives and rumbled to 359 rush yards, East missed too many opportunities.

The Vikings had just seven possessions, and four times they turned the ball over on downs inside the Rustin 32.

Rustin shook off its opening-week loss with a 12-play, 80-yard drive, capped by Anthony Meadows’ two-yard TD for an early 6-0 advantage. The Knights were forced to punt their next two possessions, and midway through the second quarter, East took its only lead.

Ryan Duell, who threw for 199 yards, connected with Mason Griffin for a 15-yard score to make it 7-6, which held through the break.

Rustin came out of halftime on fire, forcing a quick three-and-out and then scoring on its second play when Flynn found his way out of a crowd on the far sideline and raced 64 yards to pay dirt.

Flynn led the Knights with 172 yards on the ground, giving him 273 for the season.

“Losing Drew and Alex opened some opportunities for some younger kids,” St. Clair said. “Jacobs is really turning it on and Tucker is running great. Kids are getting the opportunity to show what they can do.”

East nearly retook the lead on the following possession, but Travis Riley timed his hit perfectly on Scott Cummings, dislodging the ball to negate a would-be touchdown from the 16.

After turning the Vikes over on downs, Rustin used 14 plays to go 84 yards, with Jacobs cashing in from 19 yards out.
East found life again, though, when Griffin took a backwards pass from Duell and fired it to Jack Scott for a 79-yard TD, two plays later with just over nine minutes to play.

Jacobs threw a wet blanket on East’s hopes, breaking away for a 52-yard dagger.

“That was beautiful,” Jacobs said. “It was designed exactly like that. The hole opened up and it was amazing. I couldn’t ask for anything better.”

Rustin will travel to Great Valley (1-1), Friday, while the Vikings look to bounce back against winless West Chester Henderson.

“We’ll see the film and I feel like we made a lot of correctable mistakes,” Stephen said. “We’ll learn from the situation in order to grow.”