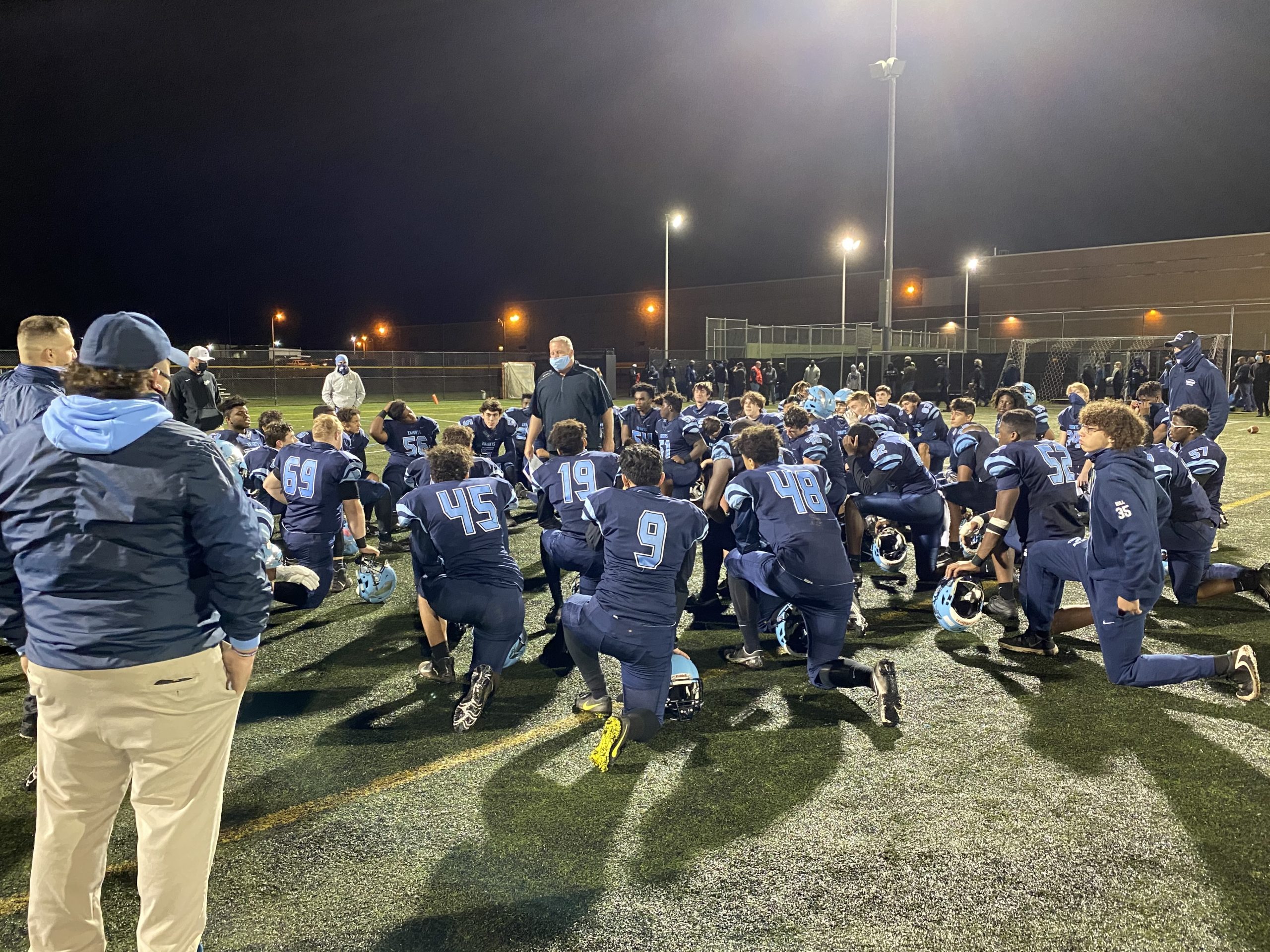 TOWAMENCIN >> Khalani Eaton capped his and the North Penn offense’s stellar night in fitting fashion – by reaching the end zone.

The Knights’ junior running back made a cut through the line, stiff-armed away a Central Bucks West tackle attempt and raced away on his final carry Friday for a 38-yard touchdown run with 6:15 left in the fourth quarter.

“I’ve been saying this for so long, he’s the best running back I’ve seen,” North Penn sophomore quarterback Ryan Zeltt said. “He’s crazy. He’s so good and you give him a ball and you think he’s going to score every single time. Watch him run, that’s all you can do.”

It was the fourth touchdown of the contest for Eaton, who compiled a massive 272 yards on 20 carries as the Knights scored eight TDs in the SOL National Conference football matchup, pulling away from the visiting Bucks for a 53-28 win on NP’s turf field.

Zeltt was an efficient 9-of-14 for 210 yards, a pair of touchdown passes to Maliq Staten and an interception while Ethan Spann added a two rushing TDs as the Knights (2-1, 2-1 conference) earned their second straight victory. North Penn’s offense compiled 525 total yards and scored touchdowns on eight of its 10 possessions – going 4-for-4 in the second half – as NP eclipsed 50 points for the first time since beating William Tennent 56-14 in Week 10 last season.

“I think there’s always more,” Zeltt said. “We have a great running back, great o-line, great receivers. You can do anything when you got good players all around.”

Zeltt threw just one pass in the second half – connecting with a wide-open Staten for a 49-yard touchdown at 11:01 in the third for a 32-14 lead.

“Arm-strength wise as a sophomore, I mean he’s got all you need,” said Beck of Zeltt. “He really spins it at a high velocity. He’s got a good release, quick, his decision making has been for the most part really good this year.”

Staten forced a West fumble on the next series that was recovered by John Derkits at the Bucks 20. Four plays later Spann scored on an 8-yard run at 8:22 and the Knights went up 39-14.

“That was great,” Zeltt said. The defense made a big play, offense came in and took the momentum and we ran with it from there.”

The Bucks responded with an 11-play, 56-yard drive completed by Donte Mancini’s 10-yard TD run with three minutes left in the quarter. North Penn, however, needed only two plays to make it 46-21 – Eaton bursting down the left side for a 58-yard score at 2:14 in the third.

“You could agree he’s one of the top three or four backs in the state,” said CB West coach Rob Rowan of Eaton. “I mean, he’s got power, he’s got speed, he’s got vision, he’s got hands – he’s the total package. And we knew that last year, he was tough to stop last year as a 10th grade so we knew we were going to have our hands full coming in. And, yeah, they just kind of bullied us upfront.”

Eaton, who ran for 249 yards and three TDs in last week’s win over Pennsbury, had a balanced night against the Bucks – rushing 10 times for 138 yards and two scores in the first half then putting up another 134 and two touchdown on 10 carries after the break. He also caught a pass for 20 yards in the second quarter.

The Knights’ Levi Carroll made four catches for 88 yards while Staten had 81 yards receiving on two TD catches.

Mancini rushed for three touchdowns as both he and Eli Boehm collected more than 100 yards on the ground for the Bucks, who dropped to 0-3 (0-3 conference). Boehm ran 23 times for 149 yards while Mancini had 123 yards on 25 carries.

“I’m extremely proud of offensively how we executed,” Rowan said. “Obviously they’re a good defense and good players on the other side of the ball, I thought really for the most part all night we consistently moved the football. I thought we ran the ball really well and I thought our offensive line really executed at a really high level.”

“We caught no breaks with the schedule and it doesn’t get any easier cause we play Neshaminy next week,” Rowan said. “So at the end of the day, I mean we just got to get better. They only way we’re going to get off the streak is if we get better.”

West got off to a flying start Friday as Jack Fileppo took the opening kickoff back up the middle for a 74-yard touchdown return 11 seconds into the game.

Payton Davis’ interception stopped North Penn’s opening series in West territory but the Bucks fumbled the ball away three plays later and on the next snap Zeltt hit Staten for a 32-yard TD at 6:46 in the first quarter. A missed extra point left NP down 7-6.

West drove inside the Knights 25 on its next possession but turned the ball over on downs at the NP 21. North Penn needed just four plays to take the lead for good, Eaton dashing 47 yards to the end zone to make it 13-7 with 1:27 left in the opening quarter.

After forcing a Bucks punt, the Knights’ next drive began with Zeltt hitting Levi Carroll for 49 yards down to the West 21. Eaton scored on a 13-yard run two plays later at 8:11 in the second quarter for a 19- advantage.

“We’re trying to mix and match, we want to keep the teams honest,” Beck said. “Look, when they’re playing us man, I mean the Carroll kid, Levi Carroll is really good and when you cover him man I think we have a mismatch.”

The Bucks got their Wing-T attack going the following series – a nine-play, 59-yard drive Mancini capped with his 8-yard TD run at 2:54 to pull West within five. But North Penn had the quick response, going 62 yards on three plays, the last seeing Spann score on a 14-yard run as the Knights went up 29-15 with 2:29 left in the half.

North Penn tightened their grip on the contest during a 2:39 span in the third. Zeltt hit Staten for a 49-yard touchdown at 11:01 then after NP recovered a West fumble at the Bucks 20 Spann scored his second rushing TD, this one from eight yards out for a 25-point lead at 8:22.

#FOOTBALL: 3:00 3Q @NorthPennKnight 39, @Buck_Nation 21. Donte Mancini with his 2nd rushing TD of the night, this one from 10 yards out. pic.twitter.com/KAqfgnvXwq

After 20 straight points from the Knights, Mancini’s 10-yard TD had West trailing 39-21 with 3:00 in the third only for Eaton to score his third touchdowns 46 seconds later on a 58-yard run.

Mancini recorded his third score on the next series with a 5-yard run at 10:02 in the fourth. Eaton made his fourth trip to the end zone on his last carry – his 38-yard run at 6:15 ending a seven-play, 80-yard drive.