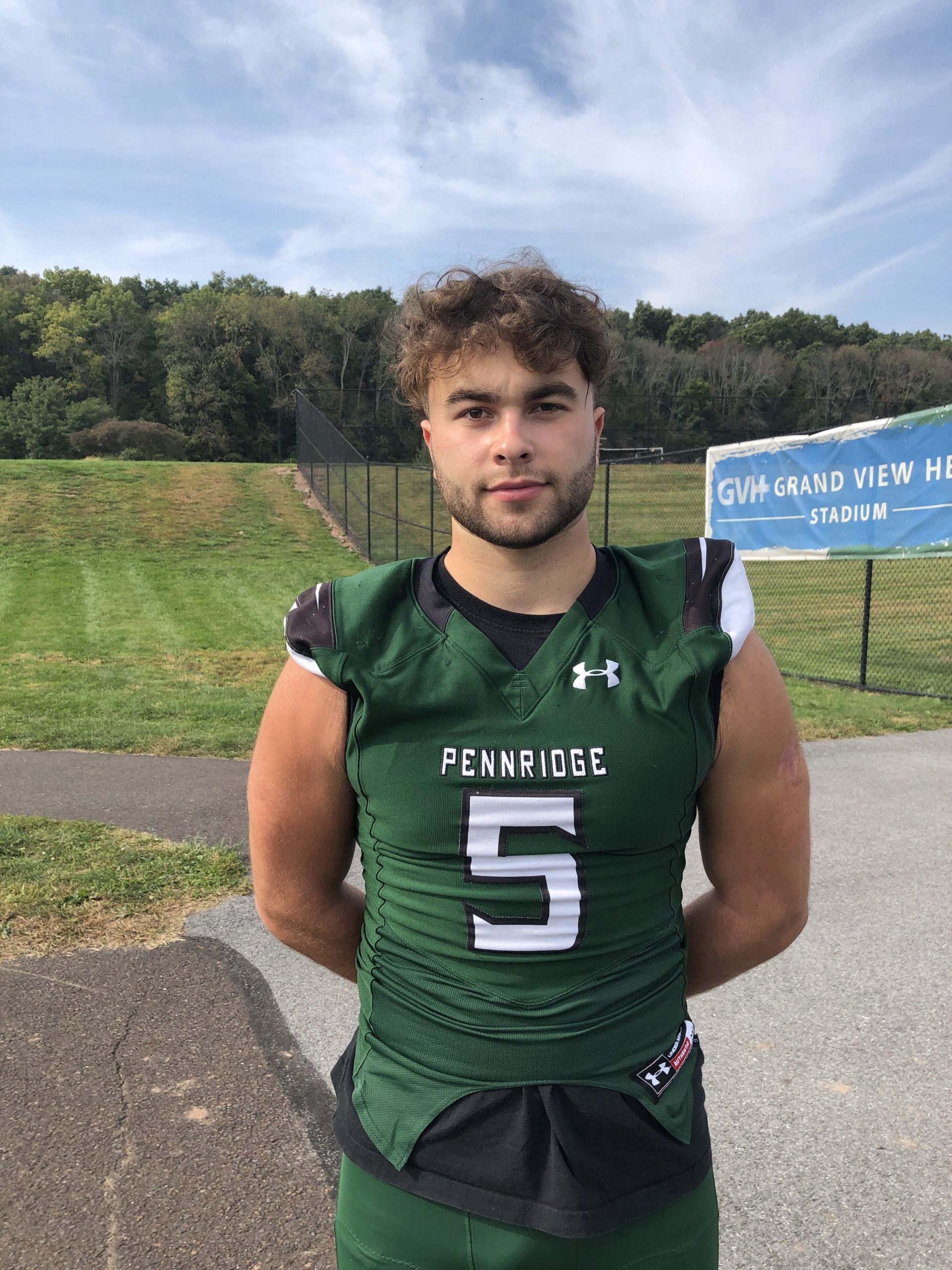 EAST ROCKHILL >> Pennridge’s 22 seniors are out to change some minds this fall.
After a rough 2019 season, the Rams seniors are eager to prove they can be a winning football team in 2020 and are taking the lead in the endeavor. An already important season had taken on more significance this fall with just five regular season games available to make their case.
“We’ve been practicing hard, becoming closer as a group and we’re excited to come out as a new team,” Rams senior co-captain Fabian Padin said. “We want to be our team, not the one from the past two years, play differently and show everybody what we’ve got.”
Pennridge finished 2-8 a season ago and went 0-6 in the SOL Continental as a bevy of injuries tortured them almost from the start of the season. Standout linebacker Shane Hartzell, who committed to Villanova over the summer, went down in the second game of the season and never came back while plenty of other guys spent unwanted time on the sidelines.
Battling injuries like that had an effect on both sides of the ball. The offense scored 21 or more points just three times and three losses came by two scores of less. Defensively, Pennridge also had trouble getting stops, something the unit is hoping to remedy with a “nasty” makeup this season.
“We’re impressing on everybody this is a physical game and you need to leave everything on the field,” senior co-captain Jack Ferguson said. “Our defense is just nasty and running the ball, we want to keep pounding teams and hopefully wear them out throughout the game.”
Rams coach Cody Muller said, depending on which game you’d pick from last year, there could be as many as nine offensive starters back and eight on defense. It is a bit of an unexpected benefit that so many players had to get in last year, but the Rams also had a solid core returning anyway.
Senior quarterback Bobby Croyle is back for a second season as starter, the line is anchored by Eli Kantor and Jake Tarburton, both seniors while Padin and senior Elias Dantzler return at receiver. Ferguson, a fullback on offense, is a tenacious defensive end with Tarbuton and Kantor also seeing time a defensive line, Hartzell roaming behind them and a veteran secondary including Padin at safety.
“We have a great core of guys coming back,” Muller said. “We’re looking to build. Shane Hartzell is healthy, Ferguson is healthy. These seniors are taking ownership of everything each and every day. We have captains, but all of these guys have done such a great job, I think all of them received at least one vote to be a captain.”
Pennridge opens with three straight road games, starting Friday at CB West. They travel to Neshaminy on Oct. 9 and face CB East on the road Oct. 17 before returning to Helman Field for a pair of home dates with CB South on Oct. 23 and Abington on Oct. 30. The Rams’ annual Thanksgiving Day game with Quakertown is also on the schedule this season with the Panthers hosting this fall.
“We have to come out firing hard,” Padin said. “It’s what been preaching in practice, we don’t like having slow practices because it means we’ll be slow in games. We go hard in practice so we can go hard in the game.”
Muller touted the word “consistency” as a major factor in how the Rams will perform this season. Last year, it was difficult to create that consistency with players out and seemingly someone new in a starting position
“You never know what’s going to happen or what could happen,” Muller said. “You see schools in the Lehigh Valley and other parts of the state that have had to shut down for a period of time, so we’re trying to take each week as we have it.”
The seniors know a turnaround season can benefit the program in coming years, but that only happens if they accomplish what they’ve set out to do this fall.
“We’re focused on this year and winning every game,” Ferguson said. “You go home and think practice was fun in a way. We’re never going to have this again, so we’re making it enjoyable.”
“All that time off when we couldn’t practice in the spring or summer, it made us 10 times hungrier,” Padin said. “We want to play football and we’re excited to get back on the field. We’ve waited for this moment for a while now.”
PLAYER TO WATCH
OFFENSE >> Bobby Croyle, Sr Quarterback.
In a season without preseason scrimmages, having experience under center is a huge asset for any team. Croyle proved he could get the job done fall, throwing for 1,156 yards and eight scores while rushing for 225 yards and five touchdowns but he’ll look to cut down on turnovers.
DEFENSE >> Shane Hartzell, Sr Linebacker.
Seems like an obvious pick, but the Rams were a different team when the Villanova recruit went down a year ago. A complete player at the position, Hartzell racked up 30 tackles in limited action last season so it’s fair to expect he’ll be flying around the field making stops at a high rate this fall.