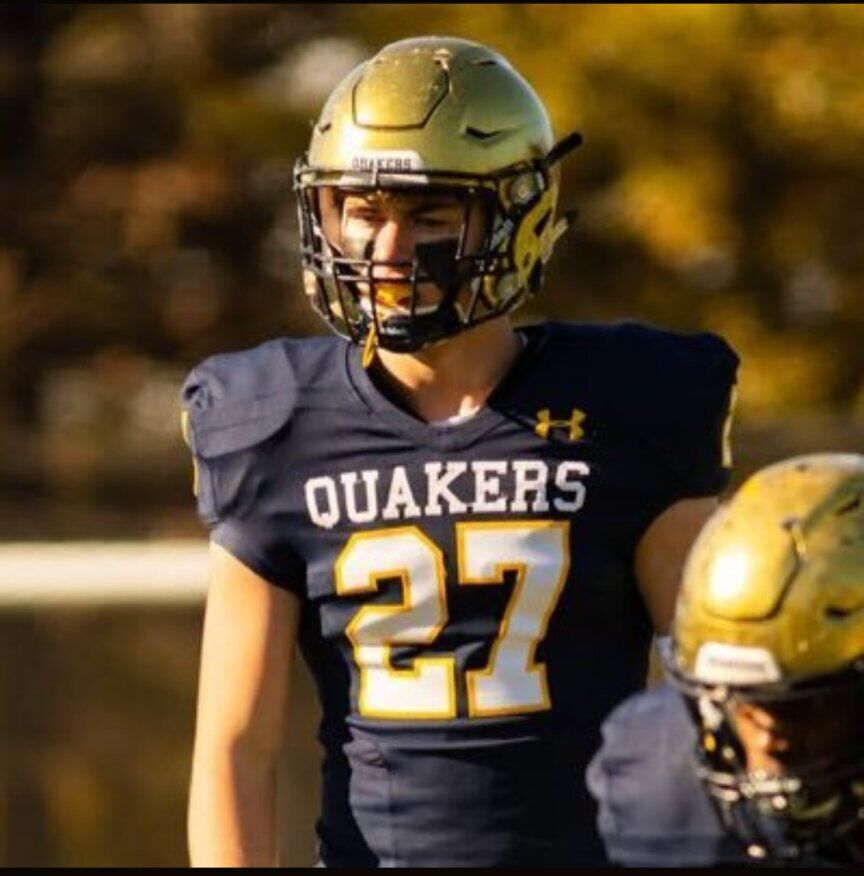 Penn Charter junior Jerry Rullo is the lead spokesperson and organizer for a group of Inter-Ac League football players fighting to have a season this fall. (Submitted photo)

Generoso “Jerry” Rullo IV saw an opportunity to make a difference, so he acted.

Instead of waiting around for the Inter-Ac League to reconsider its decision to postpone football and all fall sports due to the coronavirus pandemic, Rullo took charge. He is among the hundreds of Inter-Ac football players who are sidelined this fall. The league’s plan is to play all three interscholastic seasons beginning in January.

Rullo, a junior linebacker at Penn Charter, constructed a well-written and well-researched letter on behalf of the student organization he calls the “Coalition of Inter-Academic Football Players.” It consists of student representatives from all six Inter-Ac football programs. The letter was sent to Inter-Ac headmasters and athletic directors last week.

Rullo is the Coalition’s head spokesperson and organizer.

“My focus was football. Obviously, being a football player myself and all of my friends being football players, that’s our original focus,” Rullo told the Daily Times last week. “I kind of thought that, if we ended up being too general and focusing on every sport, that we would lose sight of our point and focus. I also think that football could be a stepping stone for bringing back all of the fall sports.”

As Rullo was drafting the letter, he began sending out feelers to players from other Inter-Ac football programs who wanted their name attached to the project. Rullo’s Inter-Ac football counterparts had his back.

“Once I drafted this letter I just reached out to as many people as I knew from other Inter-Ac schools,” he said. “I also played for Little Quakers (youth football team) and knew a lot of kids from there who ended up at Inter-Ac schools, as well as kids from my neighborhood. I also had help from one of my CYO teammates who knew kids from other schools, so I reached out to those different people and I was able to get in touch with the other representatives and student leaders. They were supportive of the idea.”

Rullo’s proposal lists several reasons why the Coalition believes that holding seven-week seasons beginning in January is the wrong decision and “an undue burden on every student-athlete, particularly multi-sport athletes.”

The proposal lists three “concerns” which “risk stripping the Inter-Academic League of its most talented competitors, as well as its capacity for high-level competition.”

Firstly, the demands of playing multiple sports along with academic responsibilities in a short period of time “will inevitably result in many student-athletes being unable, unwilling, or unfit to compete during the proposed spring period.” Secondly, the letter addresses the “physical demands” of three condensed sports seasons will “leave many athletes susceptible to preventable injuries.” Finally, there is the negative effects of suspending the fall season itself, meaning that student-athletes lose “the opportunity to showcase their talents and attain scholarships to compete at the next level. Many students rely on their athletic abilities to further their educational and career opportunities.”

Rullo concludes these points by underscoring how postponing fall sports until next spring will have an irrevocable effect on their academic and athletic careers.

“These concerns are listed to communicate the fact that the suspension of the fall season has massive, unforeseen repercussions on the lives of our student-athletes,” the letter reads. “It is not merely a matter of enjoyment and entertainment.”

In the letter, Rullo cited COVID-19 transmission statistics and data, as well as noting that Inter-Ac football programs have engaged in off-site training programs without problems and how high schools and colleges across the country and Pennsylvania have begun football competition or practice “without any evidence indicating a spike in virus transmission.” Rullo referenced statistics from the American Academy of Pediatrics, which reported zero deaths related to COVID-19 in children 0-18 years of age in Pennsylvania as of Sept. 3.

Rullo concluded the letter by listing ways to further mitigate risk of COVID-19 transmission. He referenced the protocols deployed by the Atlantic Coast Conference, including an extended sideline to help maintain social distancing, compulsory mask-wearing while on the sideline, and plastic face shields that can be attached to a player’s helmet and worn at all times during competition and practice.

The Coalition asks that Inter-Ac leadership overturn their decision by Oct. 1 and return to competition by Oct. 17.

While the Inter-Ac’s football season remained postponed as of Sunday evening, there are encouraging signs that a reversal may be on the horizon. Rullo’s letter has received nothing but positive responses from headmasters and athletic directors. He also believes that other leagues in the area — including the Central League, Ches-Mont and Philadelphia Catholic League — returning to fall sports after initially postponing will help the Inter-Ac athletes’ cause.

“The headmaster of Malvern responded to me and said that our letter certainly generated some discussion and that there would be continued discussion about this topic,” Rullo said. “He reached out to thank me and inform me about what was going on. I was also contacted by a couple of athletic directors who kind of repeated that message. Toward the end of drafting that letter, I was motivated. I saw these other leagues coming back and I thought, ‘If they’re coming back, so can we.’

“I think we’re equipped to handle that.”

Rullo is the grandson of Philadelphia basketball legend Generoso Charles “Jerry” Rullo, who was the last living member of the Philadelphia Warriors’ 1947 NBA championship team before his passing in 2016 at age 94. Rullo said his grandfather would be proud of the initiative he has taken and leading the fight for the safe return of football in the Inter-Ac.

“My pop-pop was always active and always supporting kids’ sports,” Rullo said. “I think he would definitely support it.”

Catholic League is now a go for fall sports, but the Del Val says no
Pennridge Football: Rams’ seniors eager to surprise in 2020