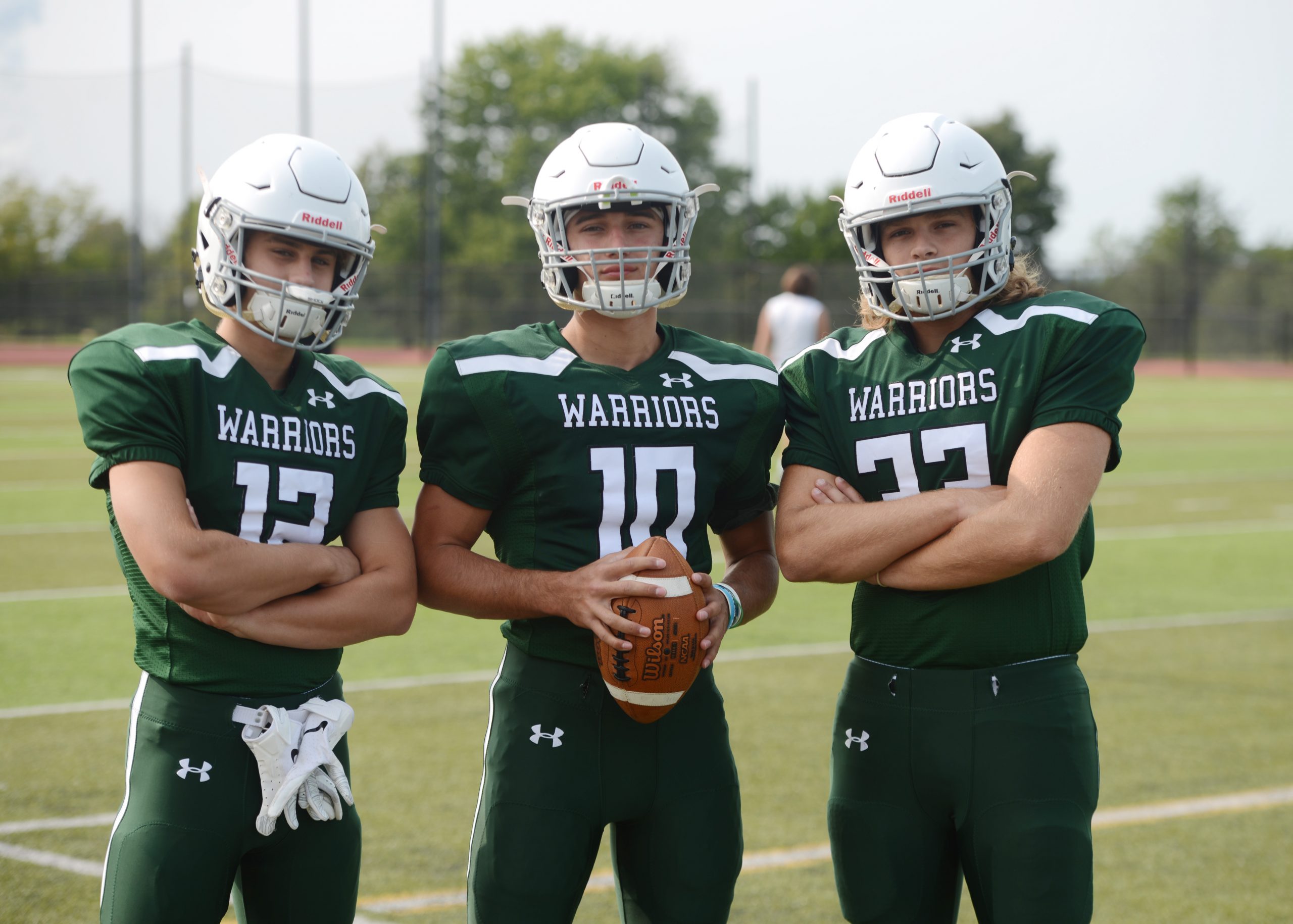 RED HILL >> Every so often, the amount of drama generated during a football game goes beyond the normal time frame.

That was particularly the case Friday when Upper Perkiomen and Methacton opened Pioneer Athletic Conference play at Upper Perk’s Indian Stadium. This contest went several seconds and one play beyond the normal 48-minute time frame, but the Warriors held on for an 18-12 victory that left head coach Dave Lotier imploring his team in its post-game huddle to come up with a less-stressful result next week.

“Pulling out the win at the end … it’s a credit to the guys,” Lotier said.

The difference in the game ended up being three yards, the distance Upper Perk’s last pass play of the game — one coming with no time left on the clock — fell short of paydirt. After seeing the Warriors take their first lead of the game with 35 seconds to go, off Mike Merola’s 14-yard pass to Justin Gumienny, the Indians drove into Methacton territory on the legs and throwing arm of quarterback Hunter Flack.

Flack got UP to the Methacton 41 with two seconds to go, then threw incomplete as the clock expired. A roughing-the passer penalty by the visitors, however, moved UP to the 24 and gave it one more play to shoot for the win.

Flack (11-for-19, 194 yards) hit Logan Simmon on a crossing pattern, and the junior running back angled toward the end zone along the UP side. But Jude Wozniak became Methacton’s defensive star by dropping Simmon at the three.

“It was an amazing play,” Lotier said. “Their tailback (Simmon) is one of the most talented players in the league. Woz willed himself to make the play.”

“If he (Simmon) had more position, he could have had it,” UP head coach Tom Hontz added. “We got the opportunity, but it fell three yards short.”

It was a fortuitous finish for the Warriors, who saw the second half marred by 40 yards in penalties — that after playing a infraction-free first half — and a safety caused by a snap out of the end zone on a fourth-down punt attempt at the 5:30 mark in the third.

“Our backup punter (Nevan Smith) pinned them down,” Hontz said of the series, where Methacton got the ball at its three and gained only two yards off a pair of Justin Carfrey carries.

Smith and another Indian backup, junior quarterback Gorje Navarrete, got pressed into action when Flack suffered cramps early in the second half.

Flack steered UP to 10 first-half points with a 16-yard touchdown toss to Malachi Duka (six receptions, 63 yards) on the team’s opening possession, then kicked a 32-yard field inside the final minute of the first half. He finished the night with 37 yards on 10 carries and a 34-yard punt on his team’s second possession.

“That shows how much Hunter’s in control out there,” Hontz noted. “Unfortunately, we weren’t able to give Gorje enough reps during the week. But he was out there trying.”

Methacton answered UP’s opening TD with one of its own 10:35 into the second quarter. Quarterback Mike Merola (9-for-20, 116 yards) hit Matt Blakemore on a 13-yard pass play in the center of the Indian secondary.

On the final play of the first half, Tyler Ready booted his own 32-yard field goal to force a 10-10 tie at intermission.

“We knew we were the better team,” Merola said. “We just didn’t play like it.”

Despite the losing outcome, Hontz and his players relished having the opportunity to play after contending with the possibility of not having a season.

NOTES >> Justin Carfrey was Methacton’s leading rusher with 87 yards on 15 totes. Merola ran for 50 on eight tries. … Corey Jackson finished as the Indians’ big-yardage receiver, collecting 65 on a pair of catches. … UP was whistled for 12 penalties totalling 98 yards. … While both teams fumbled the ball a combined six times, only one was lost. Methacton’s Mario D’addesi making the recovery late in the third quarter. … Trey Robinson distinguished himself on defense for UP by intercepting Merola in the second quarter, and Tommy Flud scored a sack on the Warrior QB late in the third.