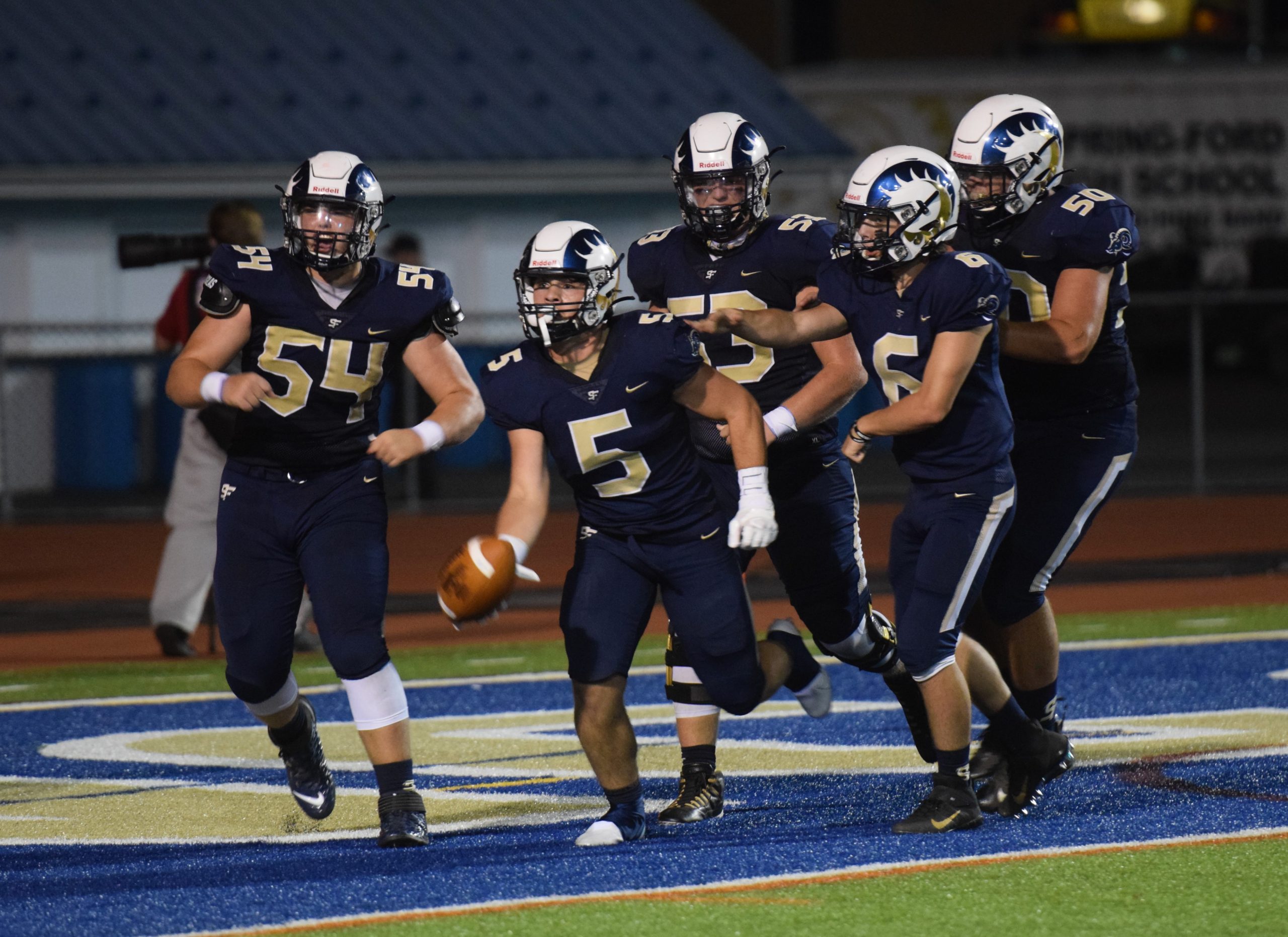 ROYERSFORD >> This preseason, Spring-Ford coach Chad Brubaker was asked about the strengths of his team.

“The secondary, and the defensive tackles are the known quantities,” he responded.

On Friday night, both the knowns and unknowns of the Rams defense showed their strength in an emphatic 27-13 victory over arch rival Perkiomen Valley on the opening night of play of the delayed Pioneer Athletic Conference season.

The defending PAC champions caused four turnovers and held the Vikings to 35 total yards in the first three quarters, while a physical, methodical offense tallied the contest’s first 27 points before a late Vikings rally closed the margin.

For the hosts, the win was their second in a row over the Vikings after three consecutive setbacks between 2016-2018.

“I’m exhausted,” said a happy Brubaker after the game. “Week 1 is always a challenge, but it’s just so good to be on the field.

“We didn’t know if we were ever going to play. I’m so appreciative that our administration, our school board fought for our kids, helped us execute a plan so we could get out on the field.”

Brubaker’s defense showed their appreciation, forcing a PV turnover in every quarter and holding the Vikings to 166 total yards — 131 of which came in the final seven minutes.

“We’ve got a couple of dudes (Nicoline and Francis) in the middle who are tough to block,” said Brubaker. “We’re really good in the secondary — we didn’t have (safety) Andrew Yoon (shoulder injury) tonight, but Cole Turner stepped up and made a few plays for us in our deep coverage.”

Offensively, Harry Adieyefeh was the centerpiece of the attack, carrying 34 times for 180 yards and a TD. The junior back saw time last year as a complement to All-Area performer Armante Haynes, but authoritatively stepped into the lead role on the offense Friday.

“Armante taught me how to run tough,” Adieyefeh acknowledged, “and running behind my guys up front sure helps.”

‘His guys’ were led by Kyle Kennedy, who was joined by fellow returnees Ryan Beppel and Ian Harvie as well as first-time starters John Kaputa and Connor McMahon in paving the way for 219 rushing yards for the Rams.

“Harry makes it easy when he runs hard like that,” said Kennedy.

TD run from Harry Adieyefeh from 1 for Spring-Ford 7-0 lead, 8:11 1Q. Ground and pound from Rams to great effect pic.twitter.com/uEYub6EyyZ

A game that traditionally marks the end of the PAC Liberty slate was moved to Week 1 — just one of many changes to make the 2020 season possible — and the change was to the advantage of the Rams, who returned several starters on both lines as opposed to the very young Vikings, who brought back only four total starters from 2019.

“I’m glad to have a game under our belt — the fact that the game was Spring-Ford probably wasn’t too helpful for us,” allowed Perkiomen Valley head coach Rob Heist.

“But that’s no excuse for the way we executed, and I’m going to take responsibility for that. Spring-Ford has a lot of new players too, but they had a very smart game plan and executed it perfectly.”

Adieyefeh was busy all night, but particularly on the game’s opening drive when he carried eight times for 70 yards, punctuating the journey with a short dive through a big hole on the right side of the line for a 7-0 Rams lead. The physicality at the point of attack set the tone for the Rams’ success on both sides of the ball.

SF’s next drive ended inside the PV 5, when the Vikings caused a fumble that appeared to come loose after the runner’s knee was down. PV’s ensuing 97-yard return was brought back for an illegal block, taking a much-needed swing in momentum away from the Vikings, who picked up only one first down before halftime.

Communication issues caused Spring-Ford to burn their final timeout on the second play of the second quarter, but the Rams made it count as senior Nick Teets carried on a 4th-and-2 play untouched for a 29-yard score.

It was all the dominant Rams‘ defense would need. Naphtali Stine’s interception in the final minute of the second quarter set up a 28-yard Alex Nadeau field goal, expanding the Rams’ lead to 17-0 at the break. After halftime, Nicoline’s fumble recovery set up another long run by Adieyefeh to the PV 6, where Teets would take a direct snap and carry off-tackle to make the lead 24-0.

Ryan Freed got the start at quarterback for the Rams and was efficient (6-for-12, 65 yards passing) in executing a run-heavy game plan. He got a considerable assist from Teets, who took direct snaps on several occasions and turned those carries and others into a 41-yard, two-score performance on the ground. (It could’ve been a career night for Teets, who had two other scoring plays called back for penalties, including a 71-yard catch-and-run from Freed that was revoked for an illegal man downfield.)

The Rams forced another turnover early in the fourth quarter, converting it into another Nadeau field goal before the Vikings got their offense going late.

The numbers (6-for-17, 67 yards passing; 46 yards and 2 TDs rushing) don’t tell the whole story of Kohler’s evening. Under constant pressure from a relentless Rams defense, the junior signal caller extended several plays and was the greatest factor in the final outcome not appearing even more lopsided in Spring-Ford’s favor.

Midway through the fourth quarter, Kohler found Jason Posner for a pair of long gains before finishing the drive himself with a one-yard sneak to get the Vikings on the board. On the final drive of the game, Kohler and sophomore Leo Hunsberger each had long first-down carries before Kohler scored from nine yards out to bring the game’s final margin to 27-13.

“We’re going to get better every week,” said Heist. “Ethan’s a keystone of our offense this year. He’s his own worst critic — that’s one of the things I love about him. I thought our line improved throughout the game, and I was pleased with Leo (Hunsberger’s) performance for his first varsity game.”

The night, however, belonged to that Rams’ defense, who even without the services of Yoon showed their ability in spots that were expected to be strengths (defensive tackle, secondary) and answered any questions about their ability to replace last year’s linebacking corps.

“We have work to do on both sides,” said Brubaker. “But it’s always a good win when we can beat PV. We’ve been working long days, and right now I have a feeling of relief.”