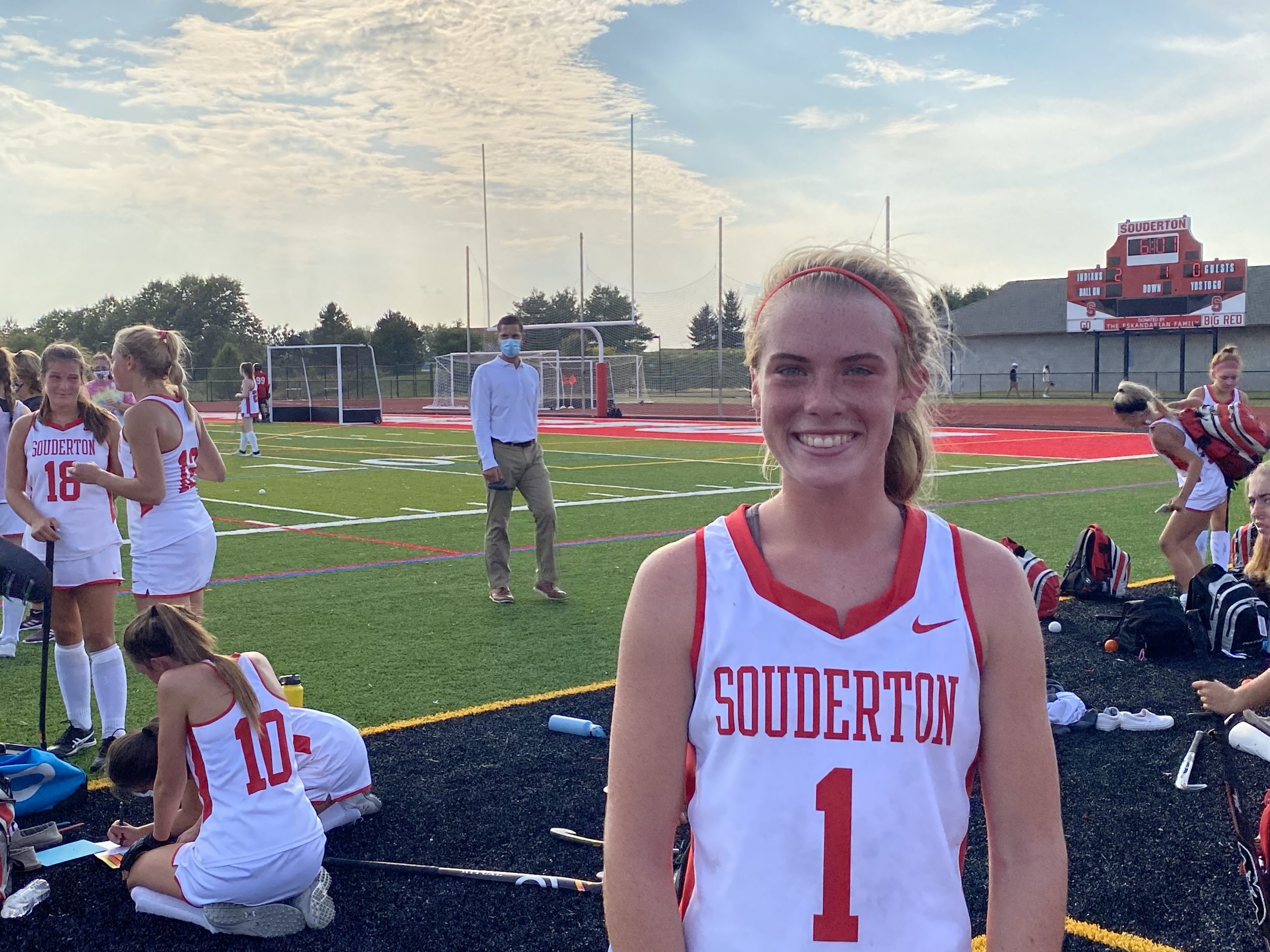 FRANCONIA >> Lauren Kenah made sure the Souderton field hockey team was going to give coach Sue Casciato a victory as a birthday present.

“I texted her before the game and I said ‘Coach Sue it’s your big day, we got to put a win on the field for you,’” the Indians junior said.

Kenah ripped a shot into the cage less than five minutes into Friday afternoon’s SOL Colonial Division matchup with visiting North Penn. Early in the fourth, she scored her second to double the lead as the Indians capped an unbeaten opening week by shutting out the Knights 2-0.

“We shifted our lineup around a lot because we haven’t had scrimmages. We didn’t really know what we had,” Casciato said. “Three games this week we’ve had three completely different lineups and every game we’ve had four or five different lineups going. But our goalie Jordan (Michalak) played a great game and Taylor Weaver, our defensive back, had an awesome game so she kept us out of trouble.”

FIELD HOCKEY: Souderton’s Lauren Kenah makes a run up the middle & has her shot get through traffic & into the cage 11:15 4Q for her 2nd goal in the Indians’ 2-0 win over North Penn. pic.twitter.com/Os9UQthaot

After conceding Kenah’s goal at 9:07 in the opening quarter North Penn pushed to answer, out-corning the Indians 4-1 before halftime. But the Knights (1-2-0, 1-2-0 division) never found a way to shake the offensive struggles they’ve had so far this season and dropped their second straight.

“I don’t know statistically, it seemed especially in the first half we had more corners and more shots – we’re just having trouble finding the back of the cage right now,” North Penn coach Shannon McCracken said. “We had three games this week and we only scored two goals so we got to work on that before we see (Central Bucks) South next week.”

Souderton (2-0-1, 2-0-1) began to get the better of possession after the break and earned the half’s first seven corners. And while the Indians did not convert on its corner chances, Kenah struck for her second with 11:15 remaining in the contest and Souderton went to claim a second straight win and fifth consecutive victory over North Penn.

“We needed another one – 1-0 is definitely not concrete,” said Kenah, who is also on the U.S. U16 national team. “And North Penn’s a great team so we definitely needed another goal. I felt one coming. I felt it was a matter of time because we had a lot of opportunities we just needed to put the ball in the goal.”

Kenah added the two-goal cushion by driving down the middle of the field and at top of the circle let go a shot that founds its way through a crowd and into the cage.

North Penn earned a pair of late corners – Kenah taking off a shot off her foot on the first drawing the second, which had the Knights unable to put a chance towards the cage.

“We need to do a little bit better job of just having that grit in that circle and just finishing, following the shot and finishing the play,” McCracken said. “We have some youth that we’ve added to the forward line and we’re moving some kids around, trying to actually find what works.

“And every team has gone through this – we didn’t have that security of a preseason and scrimmages to kind of see what’s working. So we’re up to the challenge to figure that out but yeah those are the couple things that have just been holding us back a little bit.”

FIELD HOCKEY: End 1Q Souderton 1, @NPFieldHockey 0. Lauren Kenah rips in a shot at 9:07 for the game’s first and so far only goal. pic.twitter.com/FnYzyDeA9n

Souderton, which last season was SOL Continental Conference co-champ with Central Bucks East and qualified for the PIAA tournament for the first time since 2006, heads into next week atop the Colonial Division with seven points. The Indians visit Pennridge 4:45 p.m. Thursday.

“Not a bad week,” Casciato said. “We played a great game on Wednesday and we were a little slow today and Monday but like I said it’s such a short season anyway so you don’t have a lot of time to adjust. But everybody’s just glad to be out playing.”

North Penn’s next game is also Thursday on the road against Central Bucks South at 3:30 p.m.

“Our conference is so strong,” McCracken said. “We’re a unique conference. Most of the teams in our conference make the district playoffs so it’s a fun battle, it’s challenging – I’d rather play great teams but in this situation you’re thrown right into the fire. But, hey, we got to rise to the occasion, make the most of it.”

Kenah’s opening tally Friday also came from the top of the circle, the junior getting open space to blast a shot into the lower left of the cage 4:53 into the first quarter.

“It was awesome,” Kenah said. “I got my eyes up, I saw that my forwards had pulled the D and the defense stayed to the outside so no one was coming on me so I just took the shot.”

North Penn had a quality opportunity in the first half in transition. Maddie Waldspurger’s long pass through the middle was chased down by Bay Detweiler, who drove into the circle but had her pass knocked out of danger by Frye.

The Indians threatened on their lone corner before halftime as Ang Borisow’s turnaround shot went wide of the left post.