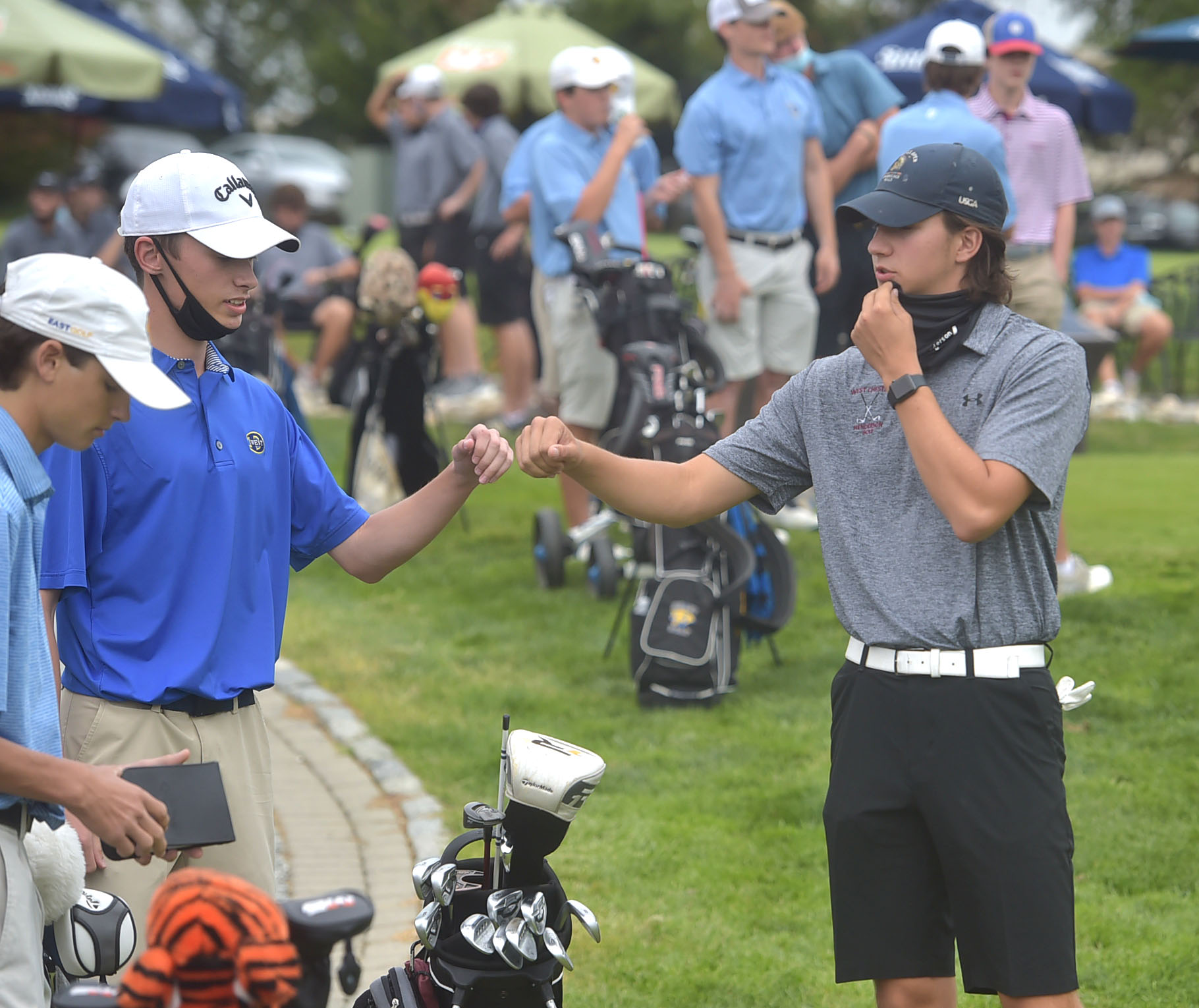 DOWNINGTOWN >> Downingtown West freshman Nick Gross, one of the top-ranked golfers in the United States for his age group, led the Whippets to victory in a Ches-Mont League tri-match on Thursday against Downingtown East and Wets Chester Henderson at Downingtown Country Club.

Nor was the coming-out party for Gross, whose round of 3-under par 33 showed why he may take the league by storm this season.

No, the biggest story was the return of sports in the Ches-Mont League, as Thursday’s golf matches marked the first league competition in nearly seven months, after the COVID-19 pandemic cut the spring season short and postponed the fall season by more than a month.

Players teed off in groups of three, with one golfer from each team, and kept their distance whenever possible.

“Nick’s got a great game, he’s cool, he’s going to be great,” said Downingtown East junior Jake Leon, a second-team All-Ches-Mont player from a year ago, who shot a 39, and played in the group with Gross. “I was a little nervous starting out today — I wasn’t expecting to have a [school] golf season this fall, but it turned out to be a fun round. It was good playing with Nick and Dylan [Kochis].

“Today the atmosphere was a little different than in the tournaments I played in this summer. I know a lot of these kids, so it’s more competitive, and there’s more teamwork.”

In the season opener for all three teams, Gross’s three-under-par round on the 3,118-yard front nine at Downingtown included three birdies and no bogeys. His score was six strokes better than the second-best score in the field of 18 golfers.

Gross is coming off a red-hot summer in which he finished first in his age division at the U.S. Kids Golf World Championship for the second consecutive year.

Thursday afternoon, Gross pounded out numerous long drives, which set him up for short wedge approach shots to the green.

On the 338-yard, par 4 fifth hole, hole, the West freshman almost drove the green, then pitched to within one foot of the hole, tapping in for a birdie.

On the final hole, No. 9, a 345-yard dogleg left par 4 that features bunkers on both sides of the bend in the fairway, Gross carried the bunkers and drove to within 70 yards of the green. He followed it up by pitching to within three feet.

Downingtown East senior Dylan Gute, who competed in a half-dozen golf tournaments this summer, said, “This [setup] feels different, with three players in each group. With a foursome, you’re able to talk to a teammate.”

Downingtown Country Club is the home course for the Downingtown West squad, and another Whippet (beside Gross) who thrived Thursday was senior Jack Renihan, who fired a 39.

“Starting out today, I really felt relaxed,” said Renihan. “The format was a little different [with threesomes], but we came up with some solid scores today.”

While the front nine is not particularly long (3,118 yards), it features plenty of bunkers, mounds and undulating greens. Trees line many of the holes.

Renihan said his favorite hole is No. 8, the only par 5 on the front nine. It’s a 478-yard hole, downhill all the way, a dogleg right with fairway bunkers flanking the bend in the fairway. It also features a slightly elevated green which slopes from back to front, with three deep bunkers left of the green.

“I like No. 8 because it gives you a chance to reach the green in two and get a birdie,” said Renihan. “I was really feeling comfortable with my driver today.”

For Downingtown West, the top scores were shot by Gross (33), Renihan (39) and Brady Manning (43). Bret Bergey and Stephen Leshko each scored 45.