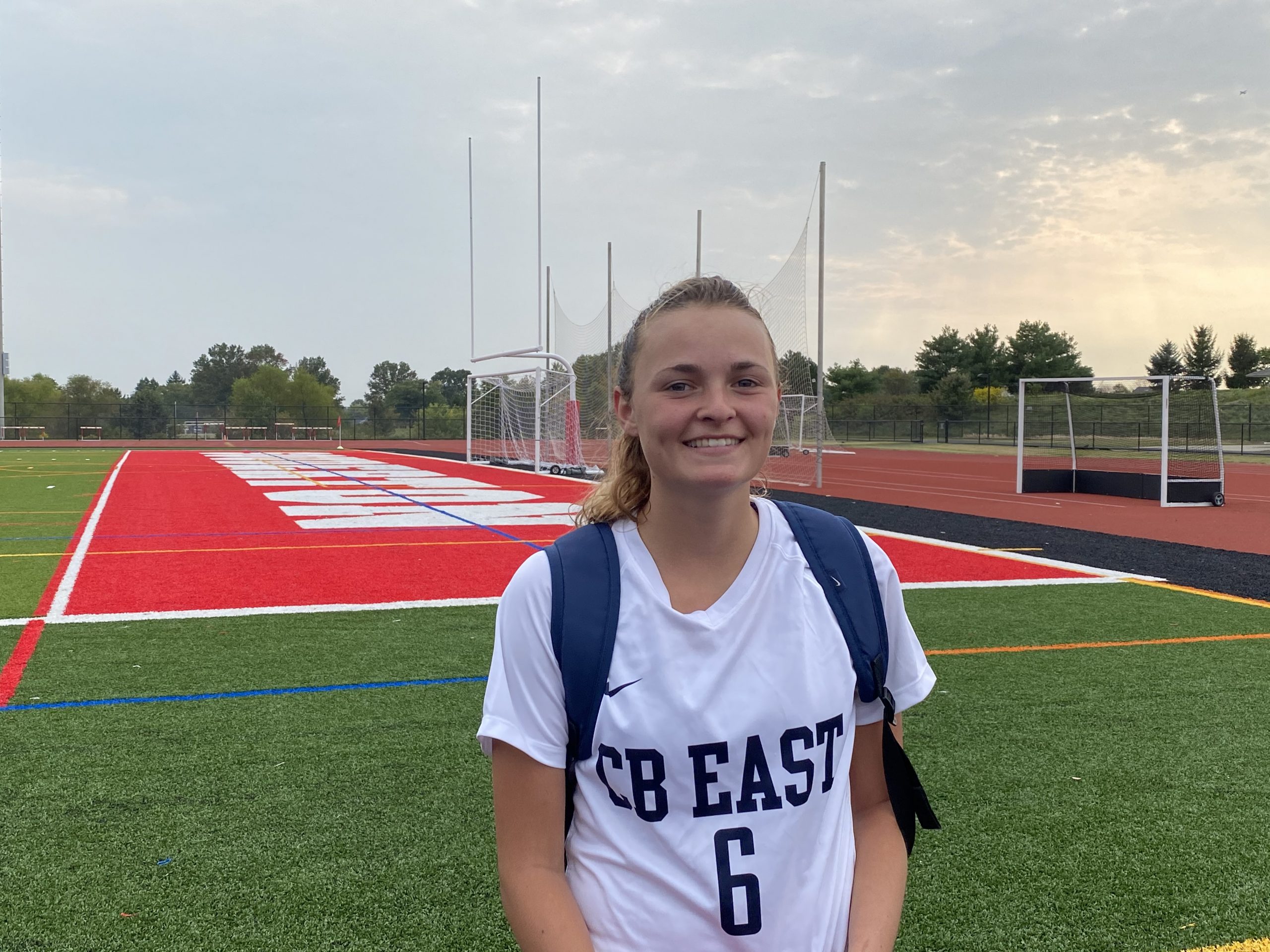 FRANCONIA >> Central Bucks East’s Courtney Curry scored her first varsity goal Thursday afternoon. She just didn’t know it until a few moments after the ball sailed into the net.

“I head the ball and then I didn’t know what happened until my teammates started celebrating,” the junior defender said. “And then they said it hit off my head and then the defender’s head and went in.”

Not that the style was any problem for Curry or the Patriots.

Curry’s tally off an Elliot Forney corner kick broke the scoreless tie with Souderton in the 58th minute of their Suburban One League Colonial Division girls soccer matchup. The host Indians could not collect a late equalizer, instead East’s Elise Duffy added an insurance goal with four minutes remaining to give the Patriots a 2-0 victory.

GIRLS #SOCCER: Central Bucks East’s Elise Duffy takes advantage of a miscue in the back to score on an open net for a 2-0 Patriots lead vs. Souderton 4:00 2H. pic.twitter.com/Ef3CqNFFMV

“I think first half we were doing a lot of the things that we want to do really well and I think it was a matter of maintaining that composure when things maybe aren’t going your way,” said Souderton first-year coach Ian Smith said. “You feel like you have to change something but going into halftime we felt like we didn’t have to change anything. But unfortunately we felt into a little bit of kind of panicking and kicking the ball up the field which is not our style of game and when we do that it’s kind of shooting our self in the foot.”

The Patriots (1-1-0, 1-1-0) found an edge in the contest after the break and had a chance to grab the lead in the second half’s first minute when Duffy found space on the left side but sent her shot right at Souderton goalie Morgan Molyneaux. Curry finally broke through at 22:13 while Duffy doubled the East lead by taking advantage of a clearing miscue.

“In the second half it definitely felt like they were hitting those long balls over the top, they had a couple people that I think they had one striker up top and she was making really good runs in behind and they were finding success with that,” Smith said. “And our defense were kind of sitting back and just clearing it upfield and we got caught in that kind of kick-and-run game.

“That was the way it was going which, whatever, that’s things we can work on in practice, that’s fine. It was just that long ball today we fell into the habit of playing the way they were playing. So, it is what it is.”

For East, Thursday’s win provided a rebound from two days prior when the Patriots opened the season falling 5-0 to defending District 1-4A champ Pennridge – East allowing five goals for the first time since 2009.

“Our formation was a total change from our first game to this game,” Curry said. “And our goalkeeper Skylar (Gash) I give her a lot of credit for talking to us and guiding us through it and really helping us on the field today.”

The better defensive effort along with the pair of second-half goals ended East’s four game winless streak against Big Red, the Patriots having going 0-2-2 vs. Souderton since a 1-0 double overtime home win in 2017.

“Yesterday we went in and we said we really got to work on it,” Curry said. “We worked our formation and fixed everything up and today we showed that it isn’t a formation thing it’s us as a team working together, getting it down.”

GIRLS #SOCCER: Central Bucks East’s Elise Duffy takes advantage of a miscue in the back to score on an open net for a 2-0 Patriots lead vs. Souderton 4:00 2H. pic.twitter.com/Ef3CqNFFMV

“Situation on Tuesday (in a 2-1 win over CB South) was we had a bad first half, situation today we had a bad second half,” Smith said. “Next couple games hopefully we put it together and we get the result we want.”

Curry made it 1-0 East by dashing into a crowd inside the 18-yard box as Forney’s corner kick came in, the junior getting her head to it with a fortuitous deflection lofting the ball into the upper left corner.

Souderton’s Averie Doughty (21) moves up the field against Central Bucks East during their game on Thursday, Sept. 24, 2020. (Mike Cabrey/MediaNews Group)

Duffy, who sent a shot wide right on a breakaway chance when the game was still scoreless in the earlier second half, finally found the back of the net with exactly four minutes left – the senior striker pouncing on a missed clearance attempt and knocking the ball into the open goal.

“Our finishing can be a little frustrating but we got it done today,” Curry said.