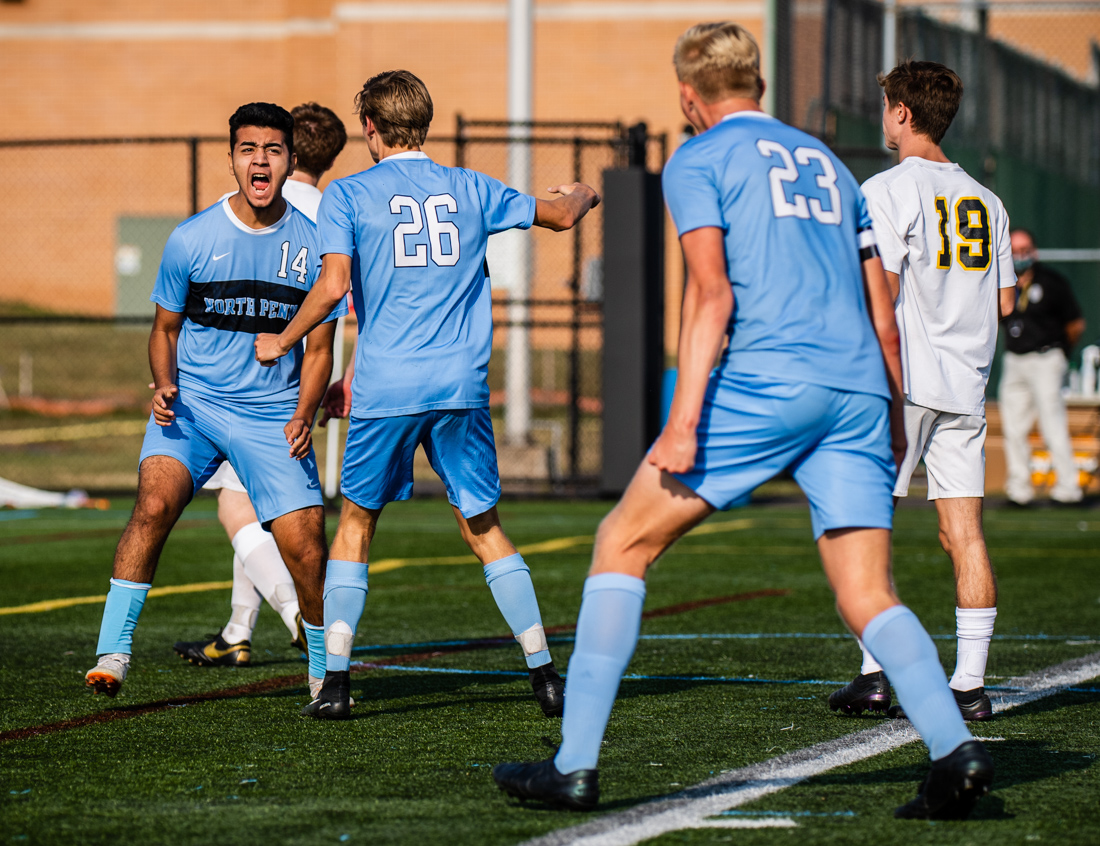 After an uneven start with a few players trying to do too much on their own, Knights boys soccer coach Chris DePeppe implored his team to let the ball do the work. The message got through and North Penn started to connect passes against Central Bucks West.

All of that came together in the second half, when an excellent build-up led to Jovani Gonzalez finishing the only tally as the Knights edged the Bucks 1-0 in their season opener at North Penn on Tuesday.

“We needed to relax,” Knights midfielder and co-captain Roman Ilvoski said. “Once we saw West start to ping the ball and try to connect long balls, our back line and midfield really started to connect. We did a good job of telling everyone to relax and play like we usually do.”

It’s not often high school teams get to pick up where they left off the year before, but thanks mostly to the circumstances of the past six months, that’s exactly where North Penn and CB West found themselves on a sunny but windy afternoon. Last November, the Knights topped the Bucks 2-0 in Hershey to capture the PIAA 4A title in what’s become a fierce but respectful rivalry between the programs.

Tuesday, the names at the top of the fixture were the same, but many of the names on the roster sheets were new as both sides mixed in newcomers with the returning core of last year’s squads. Fittingly, it was a newcomer for North Penn in Gonzalez, a transfer from Wissahickon, who courted the breakthrough effort.

“It’s a brand new team compared to last year,” Knights senior co-captain and midfielder Josh Jones said. “We lost a lot of guys to graduation but we’re still going to play our philosophy to possess the ball and it showed today. I thought we played well for our first game.”

The 2020 season also brings a change in the Suburban One League standings as West and North Penn are now part of the SOL Colonial Division and as of now, their schedules consist only of division foes. That wasn’t going to change much between the lines for a pair of programs playing their seventh match against each other in the last three seasons.

It took some time for the chances to start coming but once North Penn started clicking passes together through its midfield, they did come. Jones, who has committed to nationally ranked-Louisville, had the first when he hit the far post on a shot just past the midpoint of the first half.

Dominik Gedek, a senior in his first year playing for the Knights, had the next chance with a pinpoint shot that was turned away by Bucks senior Luke Shank, making his first start in goal. Shank played a terrific match in his debut, also pushing away a close-range header from the 6-foot-4 Jones with about 10 minutes to play in the first half.

With senior James Lutz in the middle of the back line and senior Jayden Morris holding in front of the defense, the Bucks have a pair of capable leaders who played big minutes last year supplanted by a host of other players they expect to fit in.

“With this group, we talked to them about how they have to grow up quickly together,” Szygiel said. “It’s a shortened season and North Penn returns maybe as much as anybody so we are constantly trying to make up that ground. Today was a good opportunity, I think I went 22 or 23 deep off the bench and it came in a one-goal game against North Penn.”

Ilvoski, a returning starter, noted there was a bit of a slow start in preseason getting the new faces in the Knights lineup on the same page but he feels the group has come along quickly. A vocal presence in the middle of the pitch, the hard-working senior connected well with Jones and new starter Alex Stewart to spray passes up the field.

Being heard wasn’t a problem for the Knights, who had plenty of guys willing to speak up and either demand the ball or point out an open teammate, which Jones said was a good sign early in the campaign.

“There were a lot of nerves going into it and a lot of heat between the two teams, so we needed to calm our heads and realize we didn’t just get a new team but they got a new team,” Ilvoski said. “We just had to play our game the way we do and not theirs, it was important to keep the North Penn way.”

Building up and creating chances was good, but the Knights wanted to actually finish one. They did so with 11:32 left following a textbook opportunity started with a pass from the midfield that found sophomore right back Nate Kim in space out wide.

Kim launched a cross into the West 18-yard box, targeting Jones at the far post. The senior midfielder rose up, winning the header and flicking in back across goal where Gonzalez made a run in and headed the still airborne ball into the back of the goal.

“We work on it all the time, if I’m not the primary guy then I’m supposed to send it back across and that’s what happened so I was happy to see (Gonzalez) get a goal on his debut,” Jones said. “He’s clicked right in with all of us.”

The game wasn’t decided at that point and the Knights had to withstand a rush by the Bucks over the final six minutes. West had a golden chance to equalize with 3:30 to go when a free kick by Cole Young led to a header by Thomas Montague Jr that forced North Penn senior keeper Sawyer Meade into a sensational save.

Huge save by Sawyer Meade to hold lead with 3:30 left pic.twitter.com/gEJ6MxSgib

With no easy games on the slate this fall, both sides were already moving on from Tuesday’s result as they left the field. With a short season, it won’t be long before the two meet again either as West hosts North Penn on Oct. 8.

“To me, the bar is North Penn and everyone is chasing them, including us,” Szygiel said. “They scored one and we scored none.”