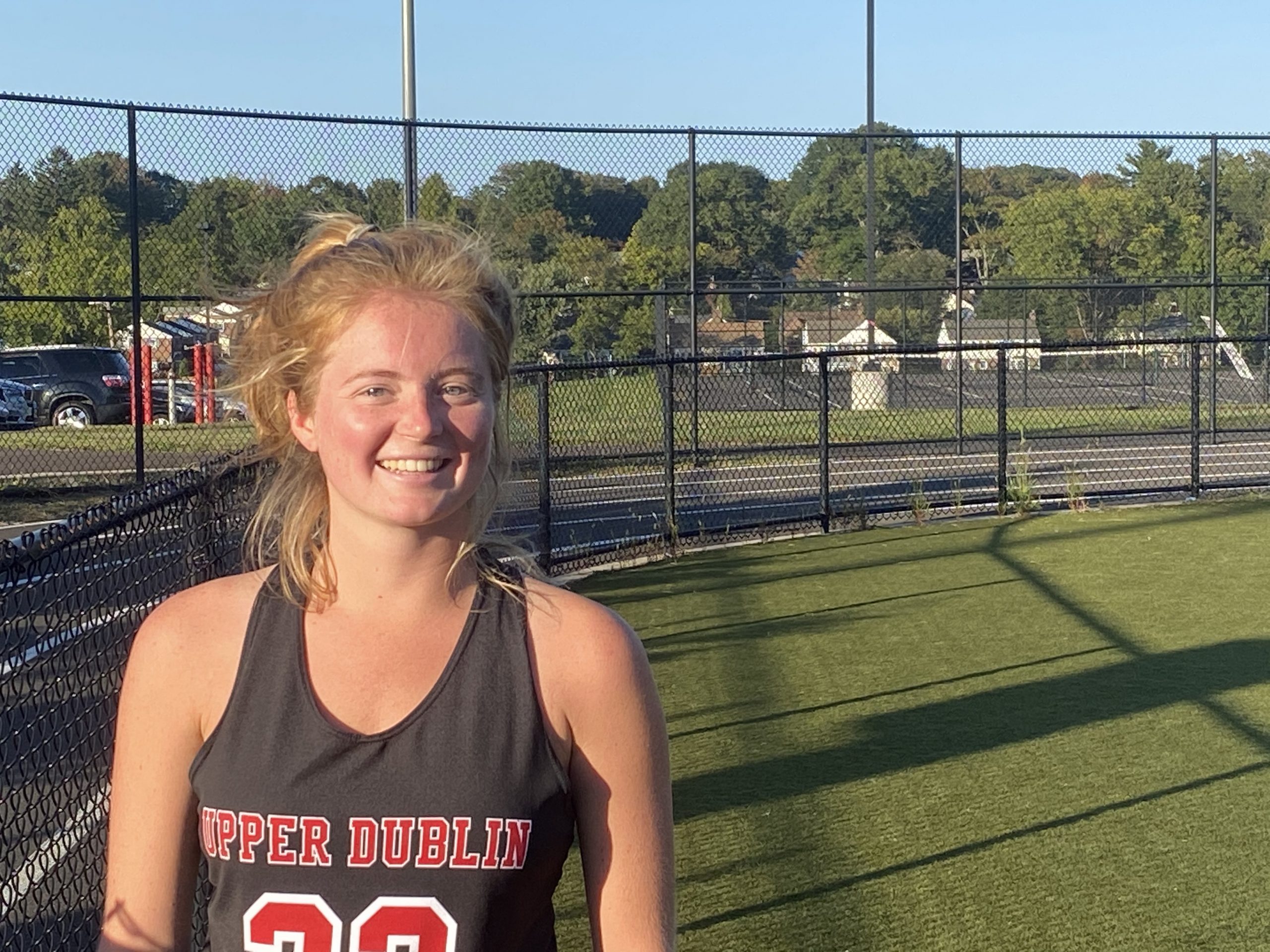 ABINGTON >> Jenn McCarry took a bit of a tumble after her shot but the Upper Dublin field hockey senior’s effort had the ball landing exactly where she wanted it to.

“I honestly kind of felt that it went in by the way I fell,” McCarry said. “And I looked up and saw it.”

McCarry’s breakaway goal early in the fourth broke a 1-1 tie with host Abington and flipped the momentum towards the Cardinals, who found the back of the cage twice more to pull away for a 4-1 SOL Liberty Division victory Monday afternoon at Abington Memorial Field.

“Jenn with her goal there kind of put us up ahead and we kind of took advantage of some more opportunities,” UD coach Heather Boyer said. “And to the girls’ credit, they did their training and fitness program all summer and you can tell. And you can see that usually later in the games when it really matters.

“So they’re fit, they’re ready to rock, they’re excited and they put that in the channels today and it paid off.”

McCarry, who is heading to UMass-Lowell for lacrosse, also assisted on the opening goal of the contest – the first for both teams in a season that finally got underway with masks and spaced-out huddles part of the protocols of playing during the COVID-19 pandemic.

FIELD HOCKEY: @UDHSFieldHockey’s Jenn McCarry take a bit of a tumble after scoring a breakaway goal to put UD up 2-1 vs. Abington 11:44 left 4Q. pic.twitter.com/VErDZjbgfH

“We brought a lot of enthusiasm because we never know how long this season’s going to go,” McCarry said. “It’s senior year and we want to give it our all. The team energy is really there this year and we think we can have a really good season.”

Annabel Coplan and Mikayla DeMichele each added a goal in the fourth while Allie Rock collected UD’s first goal in the opening quarter. The Cardinals (1-0) were out-cornered 11-3 in the contest but found a way to stay level with the Ghosts (0-1) until their three-goal burst in the fourth.

“It was a bend-not-break scenario,” Boyer said. “I was like ‘Oh boy,’ more corners, more opportunities, eventually they’re going to find the cage. I know their No. 5 (Camryn Stewart) is a talented player so we tried to focus on her in the second half and kind of face-guarded her to take her out of the mix so that other kids had to step up for opportunities.

“But I think these girls are still learning to play with one another. Nine of them are seniors, so they’ve been together a little while but some of them are in different positions.”

Abington, which held its Senior Night, tallied its lone goal on its seventh and last corner of the first half – Stewart ripping in a shot on the Galloping Ghosts’ to make it 1-1 at 5:10 in the second quarter.

“The energy kind of went down with each goal,” Stewart said. “And what we really needed to do was capitalize on the opportunities that we had going up the field and brush off the goals and have the mentality that we can get back.”

The Ghosts had the better of play in the third quarter but could not find the go-ahead score. That eventually came early in the fourth from McCarry, who Boyer described as a “sparkplug.”

“Since freshman year if I needed the intensity to pick up on the field I would sub her in,” Boyer said. “Because she will run as hard as she possibly can to anything and everything and it just elevates everybody else’s intensity level. And you kind of saw that today, she finished on that roll, so it’s fun to watch.”

McCarry got behind the Abington defense off an Avery Lennon pass and sprinted in on the cage, putting a shot into the lower right corner then taking a slight spill before quickly getting up to celebrate a 2-1 lead 3:16 in the fourth.

“I got a really good pass from Avery Lennon and it kind of just came to my strong side,” McCarry said. “I knew somebody was behind me so I wanted to get it off as quick as I could. And it just clicked.”

Upper Dublin extended the advantage to 3-1 off a corner with 9:01 remaining. Peyton Kullmann sent a ball towards the front of the cage and Coplan was there at the left post – her first shot blocked by an Abington player but put her second attempt in.

“It’s like we practiced that a lot – which we haven’t,” Boyer said. “Again to my point that oh my gosh I feel underprepared. We really haven’t had a lot of time to drill constant corners and create second and third opportunities off that initial shot and so I was proud of them for making sure they were in the right spots and doing the right things.”

DeMichele tacked on UD’s fourth goal by converting a penalty stroke, putting a shot into the right side of the cage at 7:02.

McCarry picked up the assist as the Cardinals grabbed an early 1-0 lead, the senior forcing a turnover on the left flank then finding Rock for a goal at 9:52 in the first quarter.

“Me and Allie always have a really good connection,” McCarry said. “We’ve been playing together for a long time so I could see that she was there out of the corner of my eye and she called for the ball and I was able to lift it over my defender’s stick to get the ball to her.”

Abington knotted things at 1-1 in the second quarter on a corner as Stewart took a Devan DiMaria insertion and cracked a shot into the cage at 5:10 before halftime.

“It was just really exciting,” Stewart said. “I was just like I’m going to hit it and I need it to go in.”