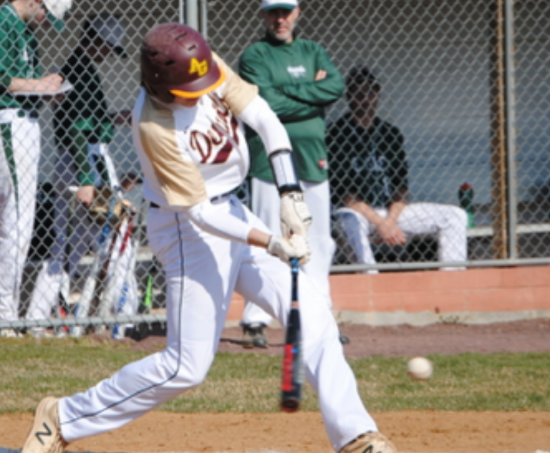 Ask any high school sports team how it feels as the season approaches, and they would all tell you how optimistic they are.

But at Avon Grove, that positive feeling was grounded in fact, going into the 2020 season.

First-year head coach John Bellaver was ready for his first season in charge of the Red Devils, and had infused the program with a ton of energy. And one of the top Red Devil players Bellaver was counting on was senior Aidan Duda, who was coming off a stellar junior season and was very high on the Red Devils’ chances in the Ches-Mont League National Division in 2020.

“We were working out since November and the team had a different feeling about it this year,” Duda said. “We really were looking forward to having a big season and going deep into the playoffs. Coach Bellaver made the baseball team feel like family and we were all very excited for opening day to get here. It really felt like a big family to be on the baseball team and we all had a real good feeling about this season and making a sort of deep run in districts and making states.”

But, Duda and all the other Pennsylvania baseball players saw their season cancelled due to the COVID-19 pandemic and the Avon Grove star talked about how he felt when the PIAA dropped the hammer on the 2020 season

“I was very upset when I heard the season was cancelled,” Duda said. “We really worked hard and were hoping for a successful season. To have your senior season wiped out like that was really a sad thing. And for me, I am playing baseball in college, but I really felt bad for some of my teammates and friends because this season was going to be the last time they would be playing organized baseball. And I have a summer league in Delaware County that the schedule is still on so I hopefully will be playing baseball this summer.”

Duda will continue his academic and athletic career at the University of Hartford next year and the Red Devil player is very excited to be going to Connecticut for his college years.

“The reason I picked Hartford was I really wanted to play Division I baseball, and they have been there since the beginning with me,” Duda said. “And when they offered me and I visited there I really was made to feel at home by the coaches and they won the America East Conference in 2018 so they have a good baseball program. Also, I want to major in civil engineering, and they have a really good program in that, and they also have some good internship opportunities so I am really happy to be going to Hartford. The school and the baseball team just seemed like a big family to me and I am happy to be going there.”

SENIOR WEEKS: Barthmaier did it all for Coatesville, from football field to baseball diamond
SENIOR WEEKS: Rustin’s Supplee uses rivals inside her own home to stay motivated after cancelled season