Upper Dublin holds off Downingtown East in 2nd half, advances to District 1-6A quarters 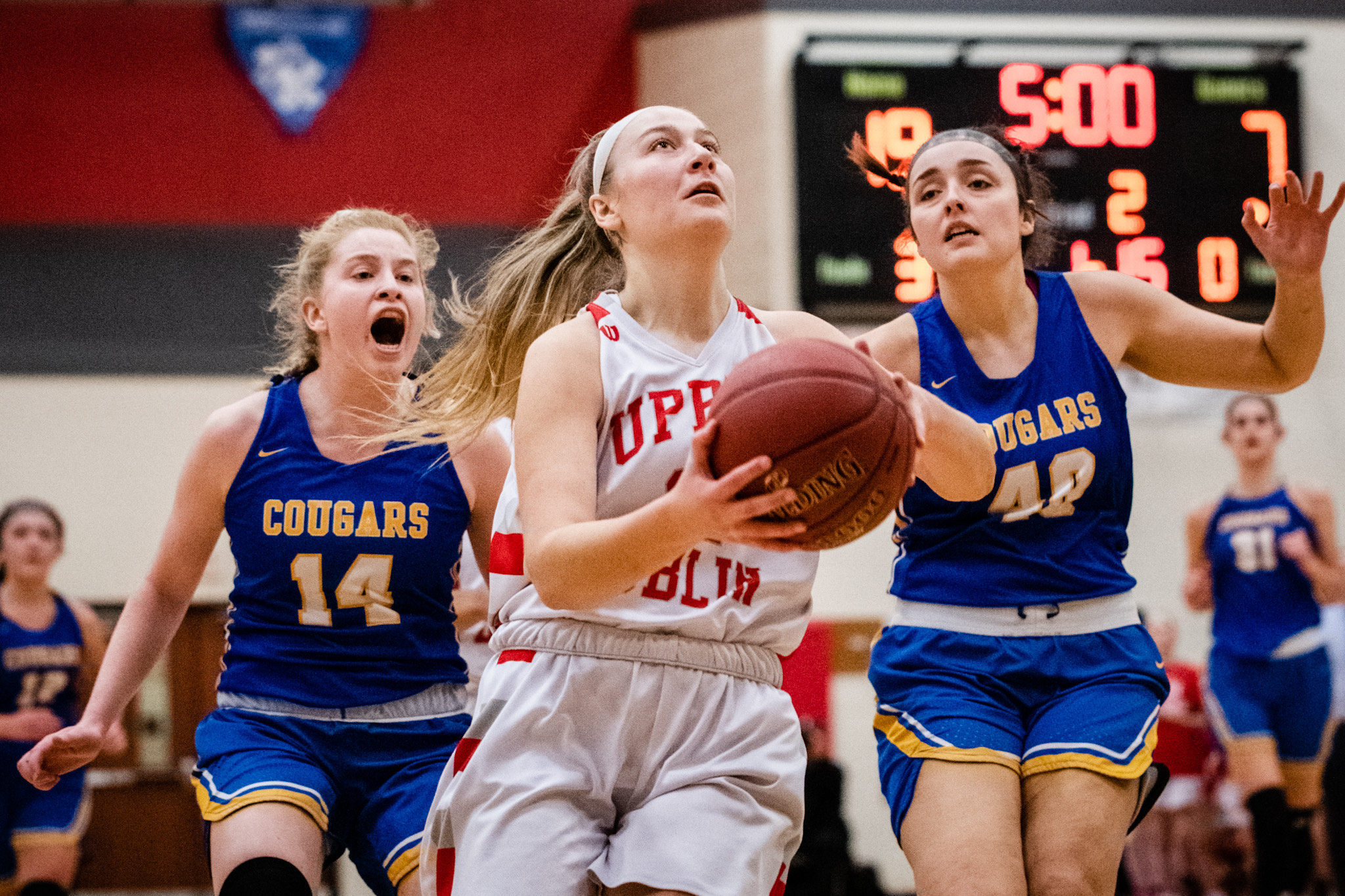 Upper Dublin’s Dayna Balasa (32) readies a layup after a steal and breakaway with Downingtown East’s Caroline Brennan (14) giving her an earful in their District 1-6A second round game on Wednesday, Feb. 19, 2020. (James Beaver/For MediaNews Group)

UPPER DUBLIN >> Not being the tallest player on the basketball court doesn’t happen too often for Jackie Vargas.

“I guess that’s just how it feels like for girls to guard me,” said Vargas, a Lehigh commit. “I don’t get to experience that a lot. It’s not fun.”

Smuda edged her opposing center in points – a game-high 17 to nine – but it was Vargas and the host No. 8 Cardinals advancing to the district quarterfinals, holding off the No. 9 Cougars’ second-half charge to claim a 48-39 victory, earning UD a PIAA berth for the sixth consecutive season.

“We’re excited to qualify for states it’s always a great thing,” Upper Dublin junior Jess Polin said. “Coach (Morgan) Funsten always says when a team qualifies for states it means it’s a good season and we’re just really excited. It was a battle, especially the second half so we’re just happy that we finished.”

Polin scored 10 points to pace the Cardinals (18-7), who move on to face top-seeded Plymouth Whitemarsh – a 51-29 winner over No. 16 Haverford – Saturday in the quarters. It will be the SOL American rivals’ fourth meeting this year, Upper Dublin having won their last two.

“PW and us, we know each other pretty well,” Funsten said. “Two days will be plenty of prep, plenty of time to prepare.”

“Haverford’s a good team and we’re going to try and focus on that,” East coach Tom Schurtz said. “We got to get one to get more so our season’s about Haverford right now.”

GIRLS #BASKETBALL: Upper Dublin’s Jackie Vargas drives through the lane, scores & draws the foul 4Q vs. Downingtown East. She made the free throw for the 3-point play. pic.twitter.com/XwiMuU9t5x

But East’s offense finally got going, boosted by its long-range shooting  – six of its 10 field goals in the second half where from beyond the 3-point arc. The Cougars’ whittled the 18-point margin in half with a 14-5 run – Smuda’s basket to opening scoring the fourth making it 37-28.

“We’re an attacking-style team defensively and offensively and I think we did things that are unaccustomed to how we play,” Schurtz said. “We don’t tend to take our foot off the gas and my message at halftime was we’re not going to play that way, we’re going to play the way that we’re comfortable playing.

“And I think in the second half you saw a truer representation of the type of team we can be. But you know what you got to play four quarters and we didn’t today.”

Vargas, however, gave UD a 40-28 lead with a three-point play – cutting through a pair of defenders to finish a drive at 5:09.

“It was open, (Smuda) was down there but I kind of got between the two girls and then went up and just went in,” Vargas said. “I guess lucky that it was open.”

Threes by Smuda and Cassidy Denning three had East within eight at 44-36. Brenner hit two more at the line on a 1-and-1 with 1:29 remaining before Mary McFillin drained a corner trey at 1:08 to make it 46-39. But those were the Cougars’ final points as the Cards tacked on two free throws in the final minute and advanced to the district quarters for the second straight season.

“I think sometimes we had some mental lapses on defense but we knew it was going to be a huge battle,” Polin said. “When knew that it wasn’t going to be easy. I mean 18 seems like a lot but when you’re playing as good of a team as Downingtown East, it’s always going to be a battle.”

GIRLS #BASKETBALL: @deastgirlsbball’s Bella Smuda with a steal then on the other end drives, scores & draws the foul 3Q vs. Upper Dublin. She made the free throw to complete the 3-point play. pic.twitter.com/JqsfeVJe0y

UD’s Kara Grebe scored the game’s first five points on a 3-pointer and jumper. A Polin three after her steal then a Sarah Eskew basket sent the Cardinals out to a 10-0 lead. Eskew’s three had Upper Dublin up 13-2 before East scored the first quarter’s last five points – Smuda banking in a jumper to make it 13-7.

The Cardinals, however, quickly regained control and extended their lead out to 18 with 12 straight points to start the second quarter.

“When we pressed, I thought that the girls did a great job taking away simple passes and forcing them into more difficult passes on the press,” Funsten said. “And we got some good results off of the press. Offensively all night, I thought it was so balanced.

“Jackie, she doesn’t feel the need to score 20 points a game. She plays simple and she gets her teammates involved. And I think that’s why we’ve been able to have the success we’ve had because of her unselfishness.”

Anajae Smith stole an East inbounds and fed Balasa for a fast-break layup and a 21-7 Cardinals lead. Smith followed with back-to-back buckets to make it 25-7. Smuda snapped the run while Lauren Kent’s two in transition had the Cougars within 14 but Vargas scored on a drive and UD went into halftime leading 27-11.

“She does it all and it’s no easy task having to guard Bella,” said Funsten of Vargas. “But offensively I thought Jackie was extremely efficient tonight I guess is the word I would use.”

Downingtown East’s Bella Smuda (31) muscles her way to the net with Upper Dublin’s Jackie Vargas (42) defending during their District 1-6A second round game on Wednesday, Feb. 19, 2020. (James Beaver/For MediaNews Group)

Brennan began the third with a corner 3-pointer but a Grebe basket then Eskew three after a Polin steal gave Upper Dublin a 32-14 advantage.

East responded with seven straight points, a Denning three following by the next four from Smuda – a three-point play at 3:56 then a free throw at 2:59 – to cut UD’s lead to 32-21.

“If she’s catching the ball with her back to the basket and she has a defender on her back, you got to double, triple quadruple, you can send all five girls at her,” said Funsten of Smuda. “you got to force the ball out of her hands somehow. And what she’s so dangerous at, any shot that she puts up she’s the most dangerous offensive rebounder.”

After a Polin basket, McFillin hit a trey to pull the Cougars within 34-24. Balasa answered with a three but Brennan’s two on a drive made it 37-26 going to the fourth.