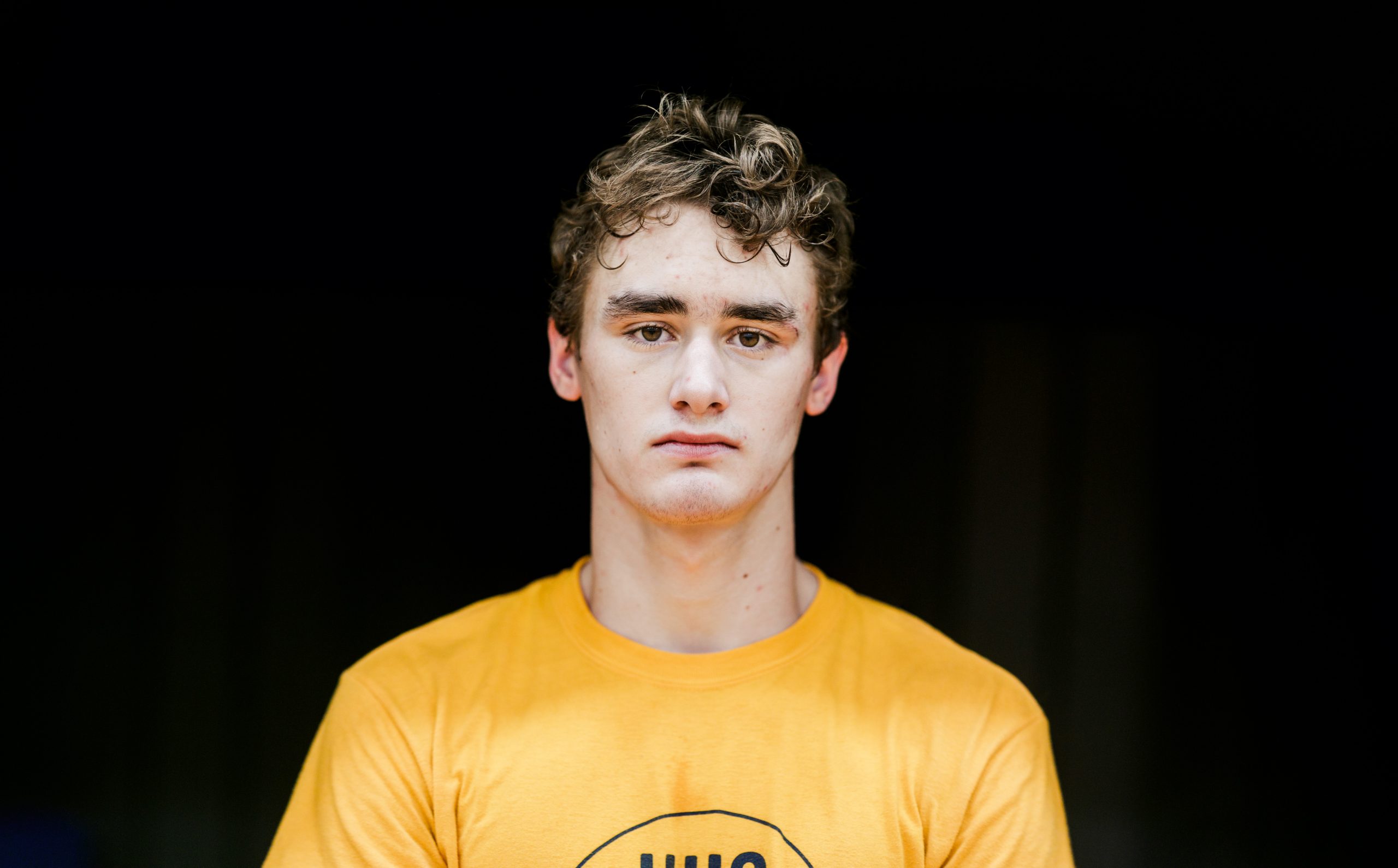 EAST MARLBOROUGH >> Unionville’s Sam Elsen doesn’t have a ton of wins or a state-wide reputation.

What Elsen does have, with his skill set, is a chance.

As District 1 begins its postseason, Friday, that’s all anyone could ask for.

Elsen, a junior, will compete in the District 1-3A West tournament, at Oxford High, and after opening some eyes last winter with his pinning prowess, he’s back for another go.

“Last year I definitely wasn’t supposed to make it to regionals, so that was a great surprise,” Elsen said. “This year, I think I’m not supposed to go to states, but there’s always a chance I can get there.”

Unionville’s Sam Elsen is the No. 2 seed at 160 pounds.. (Nate Heckenberger – For MediaNews Group)

The West tournament consists of all the Ches-Mont League teams, minus Great Valley, as well as Chichester, Garnet Valley and Penncrest.

The first round and quarterfinals will be wrestled Friday night, starting at 5:30 p.m., with the rest of the tournament, Saturday. The top four finishers advance to the Southeast Regional the following weekend.

A year ago, Elsen (160 pounds) entered the postseason with a career record of 19-20, but used four pins to reach regionals.

Elsen is going to swing for the fences, and this season, he’s connected more times than not.

“You’re always in a match if you can get a pin,” Unionville coach Todd Szewczyk said. “No matter how far behind you are, if you can stick a guy, you have a chance to win. That’s Sam’s mentality, as long as there’s time on the clock I’m still in this match and I can still get a win. He’s always gonna go for it and try to get a guy on his back.”

Unionville’s Sam Elsen has found success the last two seasons, thanks to his ability to pin people. (Nate Heckenberger – For MediaNews Group)

There’s some pedigree going for Elsen. His father, Paul Elsen was a three-time Division III All-American and two-time National Champion at Wheaton College. Now, Paul serves as a valuable mentor.

With the No. 2 seed, Sam won’t be catching anyone off guard anymore, but that doesn’t mean his production has to drop.

“Last year it just would happen,” Sam said. “I would catch someone on their back and I would just squeeze as hard as I could until they were out. This year, I feel like I have a little more technique and the pins are coming a little easier than last year.”

Unionville was supposed to have a dynamic duo of pinners this season, but two-time state medalist Tyler Mousaw moved with his family to New York. The loss in the lineup was felt, but Mousaw’s presence is still there, just in a different form.

“I think it was has a lot to do with working with Mousaw all those years,” Szewczyk said of Elsen’s strengths. “He’s been his workout partner, and it just rubbed off on Sam and he took the baton and went with it.”

Now, a look at what the expect this weekend:

Downingtown East’s Keanu Manuel and Oxford’s Cannon Hershey will make their first appearances at the weight they finished fourth and sixth in the region last year, respectively. They should expect to meet in the finals, where Manuel would be going for his 100th win. At the No. 7 seed, West Chester Henderson’s Carmen Cortese is a threat to outperform his spot in the bracket.

After starting the season at 106, Downingtown West’s Dom Findora decided to stay up, and he’s the favorite as the top seed. Garnet Valley sophomore, Matt Ricci, is a scrappy No. 2 seed that can make things difficult for anyone. Downingtown East’s Ryan Loraw is back to this weight after Manuel dropped, and he and Henderson’s Max Jackman give the weight depth.

This is one of the deeper weights of the tournament. Two-time state medalist, Killian Delaney of Henderson, is the top seed, with returning state qualifer, Nate Lucier of Coatesville, at No. 2. Either will be tough to beat, but there is a good group chasing them and the final two spots. West Chester Rustin’s Jimmy King, Garnet’s Kevin Puliti, Oxford’s Ben Smith, Sun Valley’s Shane Holefelder and West Chester East’s Max Parnis are all deserving regional qualifiers.

Henderson’s Sammy McMonagle is shooting for his second straight sectional title at No. 1. Oxford’s Cooper Johnson dropped and is No. 2, and will likely have to deal with Garnet’s Griffin Hollingsworth in the semifinals. Kennett’s Josh Barlow and Penncrest’s Nico Partsanakis are set up to meet in the quarterfinals, with the winner set up much more favorably to get out.

Rustin’s Josh Viarengo missed a chunk of the season to injury, but he has a manageable path to the finals from the top seed. On the bottom half, old rivals, Kevin Quin of Oxford and Kennett’s Trent Kochersperger, could meet again in the semis. They’re 2-2 against each other, though the last bout, Quin won due to an illegal slam, but was knocked out of the postseason.

Oxford’s Landon Meredith makes his debut at this weight as the top seed. A pair of sophomores, Henderson’s Palmer Delaney and Garnet’s Chris Wood, would make for an intriguing semi. There are potential pitfalls throughout the bracket with Sun Valley’s Dan Kearney, Rustin’s Charlie Baldesari and West’s Chase Hanak, among others.

Alex Pratzner of Rustin could be in line for his second consecutive sectional title, at No. 1. West’s Dan Lilley and Avon Grove’s Garrett Landon are his biggest threats, up top. Henderson’s Bobby English has a nice path to the finals on the lower half, which would help the Warriors’ team title chances.

Bo Horvath is looking to win the first postseason tournament as a freshman for Downingtown East since Wade Cummings in 2013. He’s the top seed and a good bet to reach the finals. Chichester’s Tymeir Bush could present a challenge from the bottom half.

There is no superstar power, but Downingtown East’s Spencer Uggla, Unionville’s Sam Elsen, Penncrest’s Shane Stevens, Henderson’s Koh Bauman and Garnet’s Desmon Perry are all returning regional qualifiers. Uggla is the top seed, with Elsen opposite. Bauman and Perry likely meet in a big quarters bout.

Downingtown East might not send the most qualifiers, but top-seeded Matt Romanelli gives the Cougars a chance to add to their championship total. A pair of seniors, Garnet’s Dillon Conlon and Henderson’s Mason Baldwin, are the No. 2 and 3 seeds, respectively, but freshman Mason Hale of Downingtown West may have a say in who reaches the finals down low.

Downingtown Wests’ Max Hale picks up near-fall points against Easton’s Isaiah Reinert on his way to a major decision in the 182-pound consolation semifinals. (Nate Heckenberger – For MediaNews Group)

West’s Max Hale is set up for his third straight sectional title as the heavily-favored top seed. Penncrest’s Matt Kirchgasser wrestled the majority of his season at 170, but he’s up and the No. 3 seed. Cash Artis gives Henderson another potential finalist at No. 2.

Sun Valley’s Ryan Catka missed the postseason as a sophomore, but he’s 29-2 and poised to break out as a junior. He seems to be the pick, here, but Garnet’s Sam DiTrolio is sneaky good. Oxford’s Kelvin Figueroa, Rustin’s Anthony Meadows, Coatesville’s Brett Fick and Penncrest’s Dimitri Partsanakis will duke it out for the other spots.

West’s Chase Mielnik chose this weight after spending some time at 195. He is the top dog as a returning state qualifier. Chichester’s Matt Richardson is an able competitor at the No. 2 seed, though Downingtown East’s Ray Wileczek hopes to whip up some of his funky magic at No. 3.

Nothing’s guaranteed in life, but Sun Valley’s Hunter Catka winning this tournament is pretty close to it. The race for spots 2-4 should be much more compelling. West Chester East’s Hugh Lemmon-Kishi has been strong since returning in January and is the No. 2 seed. Downingtown East’s Zach Aceto, West’s Matt Micale and Rustin’s Gabe Walsh are in the mix, too.

Upper Dublin holds off Downingtown East in 2nd half, advances to District 1-6A quarters
O’Hara can’t get past Wood with Palestra trip on the line