Methacton battles by Souderton into District 1-6A quarterfinals 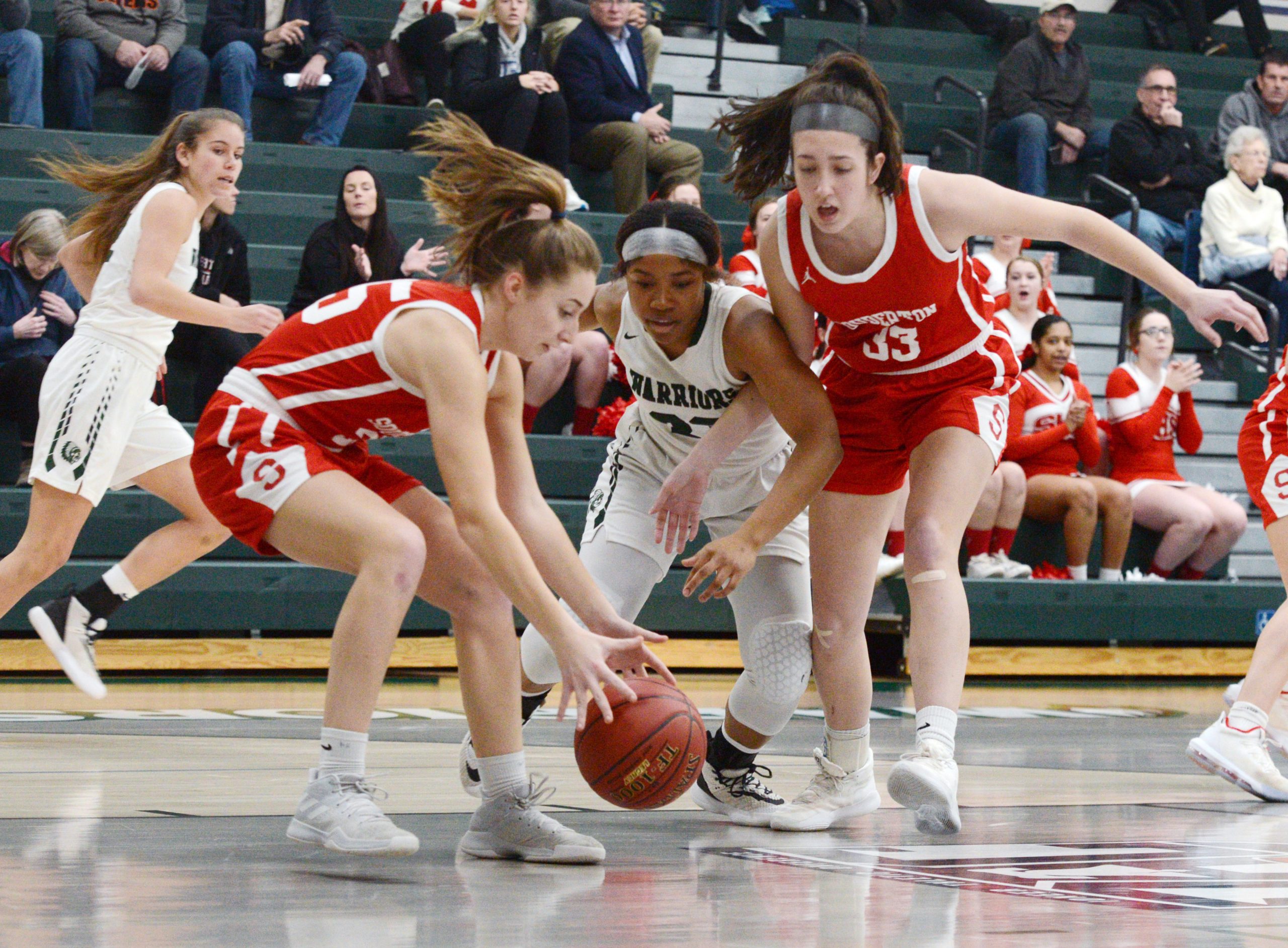 FAIRVIEW VILLAGE >> It took three tries for the Methacton girls basketball team to lock up its spot in states last season.

The Warriors made sure their push for a state playoff bid was drama free this year, taking care of business in Wednesday night’s district opener.

Fifth-seeded Methacton shook off a sluggish start to hold off 12th-seeded Souderton for a 45-34 win in a District 1-6A second round game, sending the Warriors to the district quarterfinals for the first time since 2008 and clinching a berth in the PIAA tournament for the second straight year.

“It felt so much better to get it done now than having to fight back in the loser’s bracket because now we’re right there, we’re right in states,” Methacton senior Caroline Pellicano said.

The Warriors will travel to play fourth-seeded Pennsbury on Saturday at 1 p.m., while Souderton heads to the playback bracket against West Chester Rustin, hoping to get back to the state playoffs for the fourth straight season.

“In the locker room that’s basically what we talked about: One, (tonight was) not good enough. Two, we get another chance,” Souderton coach Lynn Carroll said.

Uncharted Territory >> The District 1 second round proved problematic over the years for Methacton, including last year’s loss to Downingtown East. The Warriors went 2-1 in the playback bracket in order to earn the last of District 1’s 11 state playoff spots.

This year’s team brought back four starters from that squad in Pellicano, Hargrove, Tornetta and Timko. The group has helped lead the Warriors to the program’s first district quarterfinal since the 2008 team went to the district championship and the first consecutive state playoff appearances since the 2012-13 and 2013-14 squads.

“We always get to the district, we always win that first round game and then we never seem to be able to get over the hump in that second round game, except for the 2008 team and now this team,” Methacton coach Craig Kaminski said.

“I think experience, returning four starters from a really good season last year,” he added on what differentiates this squad from others. “I think that’s key. And they want to win. They learned a lot last year, the disappointment when we played Downingtown East and lost this game … They don’t want to lose. They want to try to accomplish as much as they can and want to be one of the better teams in school history.”

Bully Ball >> After Souderton got out to a 7-4 lead in the first quarter, Methacton reeled off 14 straight points to start the second quarter and grab an 18-7 advantage.

The Warriors, playing in their first game in seven days, started the first six minutes of the game without a point before Pellicano helped Methacton break out of the scoring slump with seven of the team’s first 11 points.

Methacton then returned the favor to Souderton, holding the Indians scoreless in the second quarter until a pair of free throws by Hayley Fenchel with 45 seconds left before halftime to take an 18-9 lead into the break

Souderton’s only senior Mikaela Reese, the team’s leader in scoring, assists and rebounding and lone returning starter from last year’s state playoff team, had to miss time in the second quarter with two fouls, while the senior-laden Warriors amped their defensive pressure on the inexperienced Indians in the period.

“I think more than anything, it was their physicality,” Carroll said. “They’re probably physically stronger than us at every position. And the way the game was officiated, both teams were going to be allowed to play.

“That I think definitely benefited Methacton. They’re tough. They make it a challenge to start an offense. They were all over our ball handlers. Off the ball they were aggressive and tough, and I think that got to us physically and mentally.”

Hargrove Wreaks Havoc >> Bringing that physicality throughout the game for the Warriors was Hargrove, who used her strength to rip the ball away from Indians’ player on several occasions and helped make Souderton’s offensive players uncomfortable throughout the contest.

Hargrove, who came into the game fourth on the team in scoring at 5.7 points per game, also gave her team a boost on the offensive end. She scored four points in the second quarter as Methacton built its lead and then combined with Timko for 12 of the team’s 14 points in the third.

After Souderton cut Methacton’s lead down to 28-22 with 55.2 seconds left in third on a three by Bohmueller, Hargrove and Timko both added quick baskets to send the Warriors into the fourth with a 32-22 lead as they held at least an eight-point cushion the rest of the way.

“She showed up with her ‘A’ game,” Kaminski said of Hargrove. “Helped us at the end rebounding, some foul shots. She’s capable. She can do that every game for us. We’d like to see it more and hopefully in the playoffs it will show up more. She’s very strong on the offensive end, can score. She’s a great foul shooter. When she’s active on defense, it just makes us a much better team.”

Familiar Foes >> In a weird twist of fate, Pennsbury was the team Methacton knocked off last year in the 11th-place playback game to clinch its state playoff spot. Now, the fourth-seeded Falcons stand in the way of the Warriors advancing to the district semis for the second time in school history.

“It’s a great opportunity for us,” Pellicano said. “The district’s anyone’s game. The top eight teams left, anyone can win it. We’re all good. We all have talent, and really it’s up for grabs.”

“We just have to go our there and play,” she added. “No pressure on us, just play our game and we’ll be fine.”

Cold Knights in Shoebox leads to home-cooked win for Penn Wood
Upper Dublin holds off Downingtown East in 2nd half, advances to District 1-6A quarters