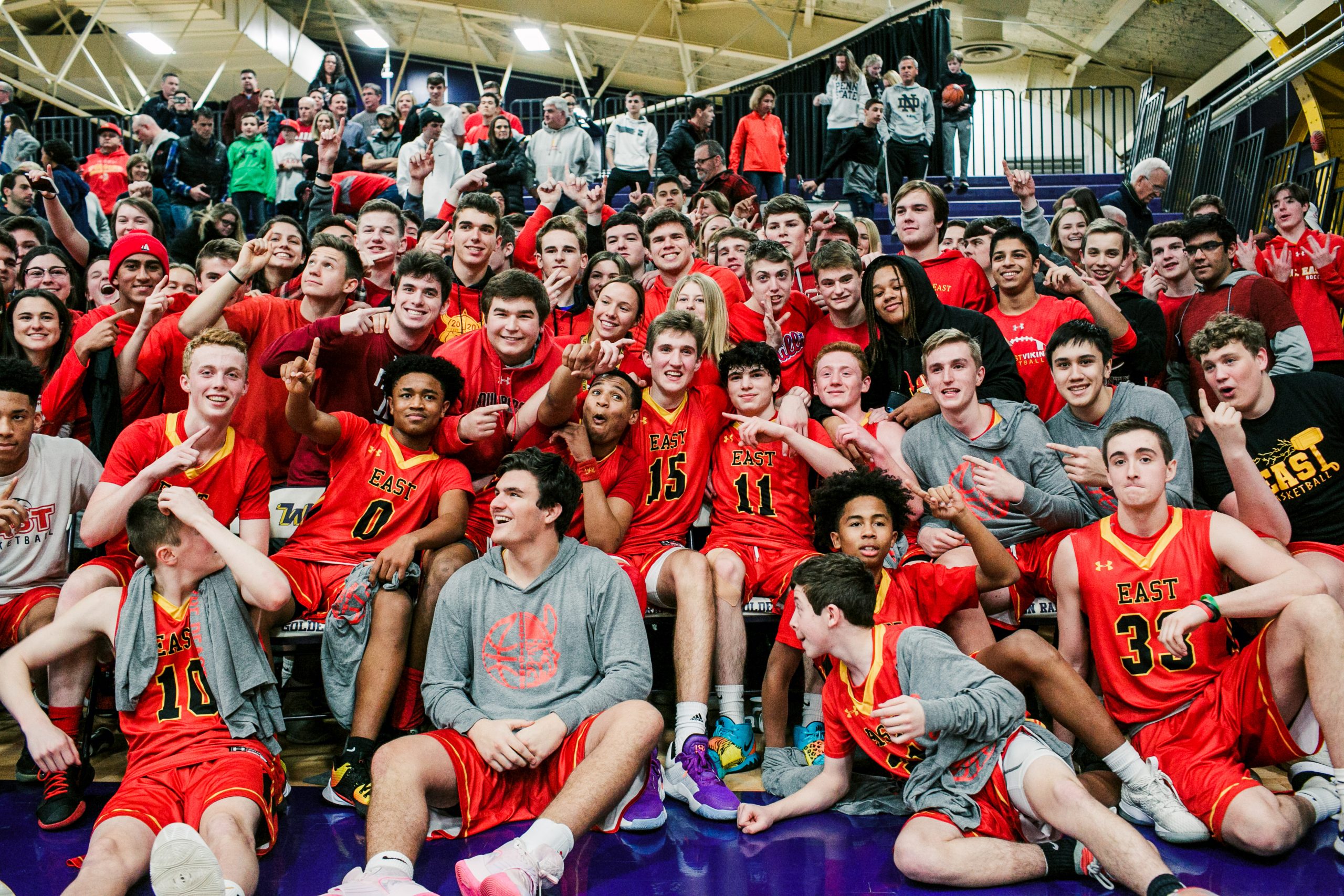 WEST CHESTER – A huge crowd gathered at West Chester’s Hollinger Field House on Tuesday evening. And whether they realized it or not, they were going to witness history — guaranteed.

That’s because it didn’t matter which team captured the Ches-Mont Boys’ Basketball Championship. Both combatants — West Chester East and Unionville — entered the fray having never won a Ches-Mont crown.

It was the Vikings who wound up breaking through, edging the gritty Indians 60-52 in a fierce battle befitting the winner-take-all stakes. And afterwards, everybody wearing red and gold seemed well aware of the historic accomplishment.

“There is no (Ches-Mont) boys’ basketball banner up in our gym. So our players knew that we’ve been playing for that banner,” said fourth-year head coach Tom Durant.

“The first time ever – it’s a great feeling,” added senior guard Tym Richardson. “It means a lot to everybody at our school.”

Tym Richardson of West Chester East glides in for a layup against Unionville. (Nate Heckenberger – For MediaNews Group)

As expected, the stars on both sides certainly showed up, with East’s 6-foot-10 Andrew Carr and Richardson leading the way, combining to score 39 points. Unionville’s Logan Shanahan provided a forceful counterpoint with 15 points and seven boards.

Afterwards, Durant was reminded that five of his top seven players graduated from the 2018-19 squad. And even though Carr and Richardson are the stars, it took a team effort to top the Indians, who had won seven of eight since last playing the Vikings in the regular season.

“It’s not just two guys, it’s everybody,” Durant said. “(Carr and Richardson) made the accompanying players better. In our first game against North Catholic, their coach said, ‘I knew about the two guys but I didn’t know about the other pesky, hard-working guys.’”

Tuesday’s clash was between two of the upcoming District 1 5A Tournament’s top-four seeds. And even though the top-seeded Vikings (now 22-2 overall) were the favorite, it was the program’s first appearance in the league final since all the way back 1999. That was, for perspective, seven years before Unionville even became a member of the Ches-Mont.

“I wasn’t even born yet in 1999,” said Richardson. “We will enjoy this, celebrate (Wednesday) at school and then turn our sights to the districts.”

Durant added: “I was (the head coach) at Penncrest in ’99 and we lost to West Chester East for the third place game in the districts. So I know.

Under then head coach Eric Anderson, East fell to Coatesville in tight back-to-back title games in 1998 and 1999. It marked the Vikings’ first title game appearances since the school opened in the early 1970s. And they haven’t been back since … until Tuesday.

“It was always in the back of our minds,” Carr acknowledged.

“So to get it done is a testament to the coaches, the program, and the kind of legacy that we are trying to build here.”

It was the Indians’ second straight appearance in the league finals. They fell to perennial power Coatesville a year ago. Under third-year head coach Chris Cowles, Unionville’s won or shared the last two C-M American Division titles. Prior to that, the Indians last hoops title of any kind came all the way back in 1989, in the defunct Southern Chester County League.

Relative newbies to the postseason, W.C. East went 21-8 a year ago but were bounced in the Ches-Mont semifinals by Unionville when the Vikings wore the wrong uniforms, started the game behind 2-0 and lost in overtime.

“Last year we got the semis and there was the debacle with the uniforms and we started with two technical. So this group had a more than a little hunger,” Durant said.

Undaunted, West Chester East advanced all the way to the 2019 District 1 5A finals before falling to a Sun Valley squad it had beaten earlier in the regular season.

“We felt it was in our grasp,” Durant said.

“Before every game, we would put our runner-up district trophy in the middle of the locker room, huddle around it and remind ourselves that we are out for redemption this season,” Carr added.

The Vikings open the districts on Feb. 19 against … wait for it: Sun Valley. East has strung together a dozen wins in a row since falling to Malvern Prep on Jan. 11. Since then, the Vikings avenged their only other setback with a 64-55 road win at Coatesville.

“We want to go back to Temple and redeem ourselves,” said Richardson, referencing the site for the 5A district final.

When asked if his program – with a 43-10 record the last two seasons – can find a way to sustain this type of success in the aftermath of the graduation of both Carr and Richardson, Durant stopped and pondered.

“That’s a challenge to our young guys,” he finally said. “Of the six in our playing rotation, we had two freshmen on the floor and two juniors. And we only lose the two seniors.

“It’s not a reload, but it’s time to replenish.”