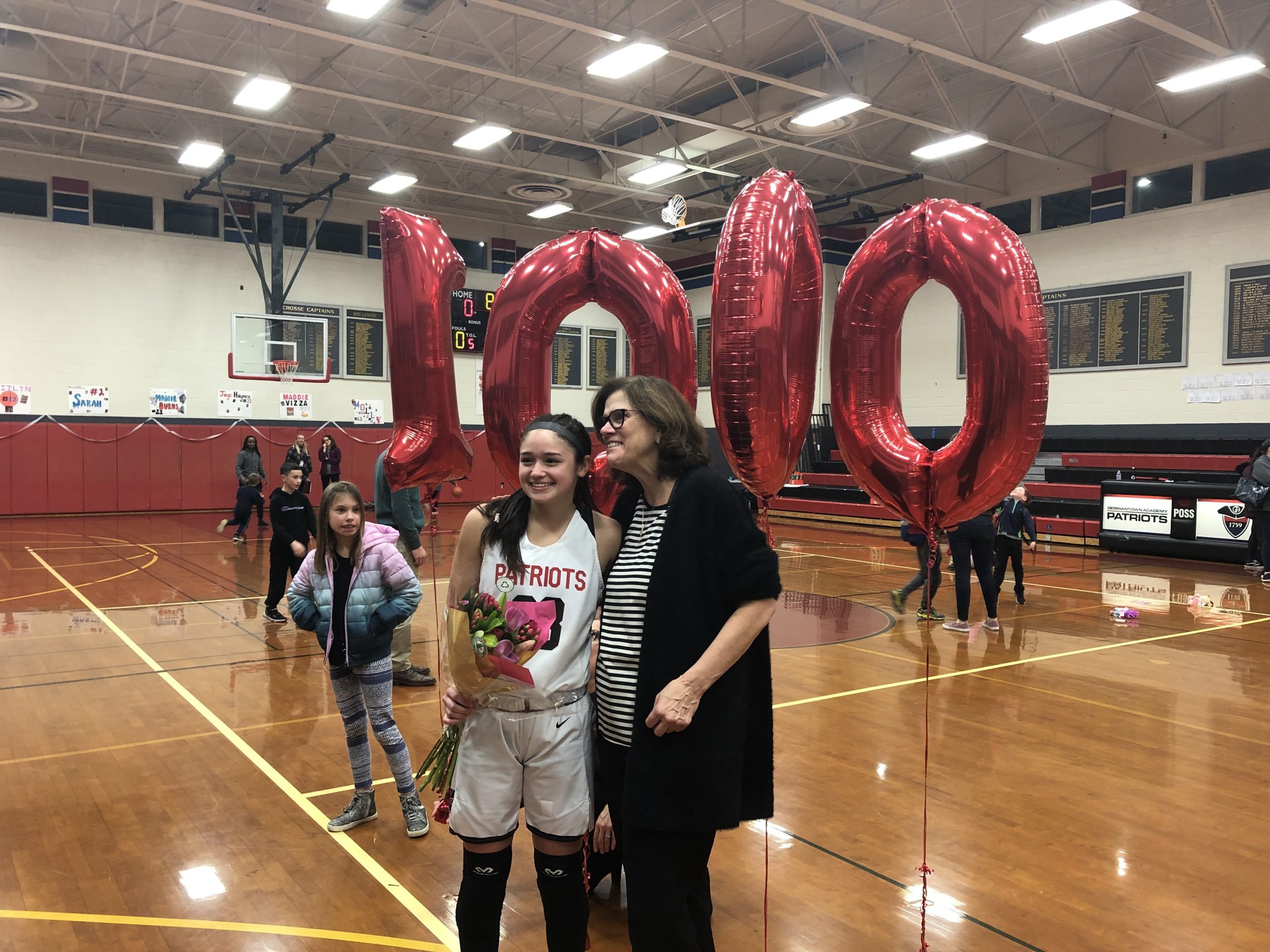 WHITEMARSH >> Maddie Vizza didn’t see herself as a 1,000 point scorer when she arrived at Germantown Academy as a freshman.

Content to be the facilitator and maestro at point guard, the senior’s scoring always came secondary after making sure her teammates got the ball and the chance to feast first. It wasn’t a goal she tried to chase, but when circumstances dictated Vizza step up her scoring, it became a reality.

“It feels really good,” Vizza said. “Kudos to my teammates for feeding me the ball. If it came, it came but coming into GA, I never really had it as a goal. Everyone coming into this program can shoot the ball and score so my role as a point guard was to create and get them the ball.”

Vizza needed 18 points entering play Tuesday and it looked like she hit the number right on the dot in the second quarter on a three, only to have her foot catch enough of the line to rule it a two and leave her at 999 points. No matter, as the Patriots ran another play for her on the next trip and off an assist from Jaye Haynes, Vizza hit the trey.

It didn’t take long for Vizza to get into the mix. An injury to projected starter Cat Polisano on the first day of practice her freshman year put Vizza into the starting lineup and aside from a bad ankle injury that cost her a portion of sophomore year, she’s been a mainstay for the Patriots.

“I think it’s again a credit to how hard my team works, I think I’ve gotten so much better because of my teammates,” Vizza said. “It’s more my nature to distribute, facilitate the offense and be a leader on the floor but I’ve increased my shots this year.”

With classmate Elle Stauffer, the reigning Inter-Ac MVP, limited to a handful of games this season with injuries, Vizza went from facilitator to scorer. Last week, the guard hit a career-high nine 3-pointers on her way to a career-best 29 points in a win over St. Elizabeth (Del.).

Listed a 5-foot-6, Vizza is often the smallest player on the court and while she’s plenty competent going to the rim, her outside shooting is a difference maker. She makes it look easy, but Vizza has put in a lot of hours in the gym, usually before school starts, to make her perimeter shooting so consistent.

“I’ve put in a decent amount of work, shoutout to (assistant coach Misha Horsey), we work in the mornings trying to develop more of a midrange game,” Vizza said. “It’s something I worked to develop this year and wanted to incorporate.”

She’s the second Patriot to hit 1,000 this year, with Haynes getting to the milestone early in December.

Vizza has committed to play at Northeastern, where she will be joined in the recruiting class by Archbishop Wood senior Izzy Larsen and join former Wood standout Katie May on the Huskies roster. The senior just felt right at home on campus and with the coaching staff and is excited to see what the next level has in store.

For now, she and her teammates are looking forward to defending their PAISAA title starting this Saturday as the top seed in the tournament. She adds her name to a pretty decorated list, but Vizza said Tuesday she hadn’t really given it much thought yet.

“It’ll probably sink in at some point,” Vizza said with a laugh. “I really didn’t think this was going to happen coming into the program. I got a great screen, a great pass and just knocked it down.

DOWN BUT NOT OUT

For one, she saw herself playing a lot more that she was able to this winter. Two injuries robbed the reigning Inter-Ac MVP and Harvard recruit of most of her final season and she’ll fall agonizingly short of reaching 1,000 points.

It hasn’t gone as planned, but Stauffer has taken it in stride and made the most of her situation.

“It’s taught me a lot about being a team player, there’s so many individual accomplishments I missed out on but it’s something I’m not taking for granted that I can watch my team succeed on the court,” Stauffer said. “Watching our young players, they’re doing so well and I’ve put all my trust in them to do what I wanted to do and go win a championship.”

Early in the season, it was recurring Achilles tendonitis that kept Stauffer from being on the floor with her teammates. Despite her best efforts, the condition kept coming back and the forward sat out more than she wanted before it finally cleared up early in January.

Stauffer came back for a road game at Archbishop Carroll but wouldn’t get to see the end of the contest. After making a play she’s made dozens of times at GA, grabbing a rebound and pushing it end to end for a layup to give GA a lead it kept the rest of the way, Stauffer came down awkwardly and went to the floor grabbing her knee.

She caught a bit of a good break as a scope revealed what was feared to be a torn ACL was just a partially torn meniscus, but she was done for the year.

“A lot of people have been asking me about it,” Stauffer said. “I’ve talked with my parents about it and they kept telling me I’m a team player and I’ve always wanted to do what’s best for my team. Right now, my goal is just to cheer on my team from the sideline.”

Stauffer had a minor procedure to clean up the meniscus tear but she expects to start rehabbing in a few weeks and be back on the court soon after. It’s her first time missing any extended time due to injury and the senior has gained a new perspective having to sit on the sideline.

“It’s tough watching other people take it for granted,” Stauffer said. “I want to be out there and you don’t understand how much you love the sport until you’re out there playing it. It’s my senior season, it’s my last time getting to play on this court and the one game I got hurt is now my last game as a senior.”

Throughout her time at GA, Stauffer has thrived with her tremendous athleticism but also has worked hard the past few years to refine her jump shot. She plans to be back at full strength by the time she gets to Harvard and if anything, her missed time this winter is putting more fuel on the fire.

For now, she’s content to burn off some of that pent up energy as the hype woman on the bench, giving teammates encouragement, advice or anything they can feed off out on the court.

“I’m just excited to get back on the court,” Stauffer said. “I can’t wait to start practicing again, be able to shoot again and just be able to play.”

Stauffer and GA point guard Maddie Vizza have been teammates for a long time and play AAU together with the Comets program. Vizza’s missed having Stauffer on the court but noted the forward has been a huge presence at every stop this season.

The two won’t be far apart next year with Vizza at Northeastern and Stauffer at Harvard. The programs play annually and Vizza joked it will be a little strange to have to go up against Stauffer at some point over the next few years.

“She’s helped tremendously,” Vizza said. “I hear her all the time on the bench. She’s an all-around great teammate, she’s up and cheering for everyone even if she can’t be on the floor and she’s one of the best teammates I’ve ever had and I know she’ll be really successful in the future.”

Tuesday’s win not only sealed up a third straight unbeaten Inter-Ac title but a pretty special run for this senior class.

GA’s seven seniors – Elle Stauffer, Maddie Vizza, Jaye Haynes, Caitlyn Priore, Maddie Burns, Sarah DiLello and Molly Oeth – have won the Inter-Ac every year they’ve been in the program and finish with a 47-1 record in league games. They still have a little unfinished business, hoping to win three more games and capture a second straight PAISAA title to finish things off on a high note.

Stauffer noted the magnitude of the accomplishment and that their class will rank among the most successful under longtime coach Sherri Retif.

“Our freshman year, we faced a lot of hard competition and we’ve built off it every year,” Stauffer said. “We never broke down and our goal was always to win the Inter-Ac. There have been so many good teams here at GA, she’s built a legacy and to be part of that legacy feels awesome.”

Stauffer (Harvard), Haynes (La Salle), Vizza (Northeastern) and  Priore (Gettysburg College) have all committed to play college basketball, joining another long list of GA alumni to go on to the next level.

“I think it’s just a reflection of our practice work ethic and our chemistry too,” Vizza said. “We’ve grown as a senior class chemistry-wise and bettered that with every single year. We’re just looking forward to these last few times playing together, keeping the energy high and finishing the year strong. I just absolutely love playing with this senior class.”

The top seed in the PAISAA tournament, GA has a first-round bye before facing the winner of (8) Episcopal Academy and (9) Hill School in Saturday’s second round at 2 p.m. Should GA advance, the semifinals will be Feb. 21 at Friends Central and the title game Feb. 22 at Montgomery County Community College.

“We just want to show how much we appreciate each other and try to prove everything we’ve worked for this whole time,” Stauffer said. “We have one PAISAA championship but we missed out on the other two and that really bothered a lot of us seniors, so we really want that one last championship.”