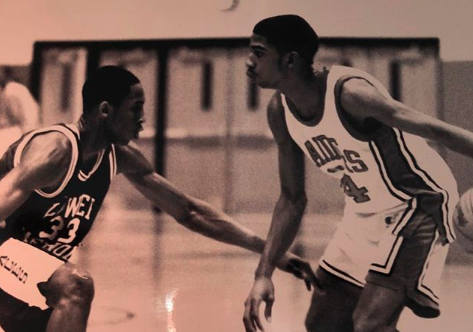 Nothing unusual there for longtime hoops fans like the Kersheys. But in an instant, a normal Sunday afternoon abruptly changed.

“We were both stunned. We couldn’t believe it at first. What a terrible tragedy.”

The reaction was similar to what was happening all across the country and beyond. They soon learned that the former Lower Merion High School standout and Los Angeles Lakers superstar had died in a grievous helicopter crash in California. At the age of 41.

“Then we later found out it wasn’t just Kobe but his daughter and seven other people,” Kershey said, his voice trailing off.

Kershey didn’t know Bryant as well as his most successful player, Richard ‘Rip’ Hamilton. But he was the head coach during the 1994-95 season, when his Red Raiders took on Kobe and Lower Merion not once but twice.

Even back in the mid-1990’s, the high school duo were already local basketball royalty. They were just teenagers, but instantly recognizable in these parts by first name alone: Kobe and Rip.

In all, there were three epic high school clashes between Kobe and Rip. The first was a regular season matchup that was one of the iconic games ever played in Coatesville’s home gym, now named after Kershey. Two more followed and both were in the district playoffs that took place at the hallowed Palestra on the campus of the University of Pennsylvania.

Kershey was on the bench for the first two. He retired prior to the 1995-96 season and was in the stands for the final showdown. His assistant, Jim ‘Scoogie’ Smith took over as head coach.

“I can’t go into Bookman Barber Shop without somebody bringing those games up,” Smith said.

“I’ve talked to a lot of people over the years about the three games we had against Kobe,” Kershey acknowledged. “This tragedy has brought those games back into my mind. And even though it was 25 years ago, and this is all such a sad time, it’s still worth reliving because we played against one of the greatest players in history in Kobe Bryant.”

Los Angeles Lakers guard Kobe Bryant, left, tries to steal the ball from Detroit Pistons guard Richard Hamilton (32) but is whistled for a foul in the first half of a basketball game Thursday, Feb. 8, 2007, in Auburn Hills, Mich. (AP Photo/Duane Burleson)

Well before going on to NBA greatness, Bryant and Hamilton were targeted early as potential stars. They were the same age, were both projected as shooting guards, and even played together for several seasons in AAU with the Sam Rines All-Stars.

“On the basketball court, Kobe and Rip were like poetry in motion,” Smith said. “They were blessed.

“And they were unselfish players. They both couple have averaged 40 points a game if they wanted to, but they weren’t about that.”

Bryant was the high-profile son of a former NBA player who spent his early years living in Italy. Hamilton was a skinny but gifted kid from gritty Coatesville.

“Kobe was a more refined player and he played his natural position (shooting guard) at Lower Merion,” Kershey said.

“Rip was the tallest player on our squad, so he played a big-man’s position because we needed him inside. He was 6-6, but he had guard skills.”

Former Coatesville and West Chester University point guard, Ricky Hicks, was Hamilton’s coach when he played for the freshman team at Coatesville in 1992-93. He later served on Smith’s staff when Hamilton was a senior.

“People used to always say that Kobe was arrogant, but he was supremely confident,” Hicks argued.

“I think Rip was great at everything — passing, defense. And Rip had a better team around him. Kobe was more flashy.”

Here is a closer look at the three showdowns:

Prior to the 1994-95 season, Kershey and Lower Merion coach Gregg Downer each had a junior star on the roster and were looking to add a quality non-league contest.

“We knew (Lower Merion) was good with Kobe Bryant and we wanted to bring him to Coatesville so our fans could see him and Rip play,” Kershey recalled. “I knew, even at that time, that Kobe would not go to college because he was so good.”

The clash at Coatesville happened in early February and drew a capacity crowd, anxious to see an ultra-rare regular season marquee matchup. It was a big deal.

“I will always remember that game,” Smith said.

“Everybody turned out to see Kobe and Rip in a duel,” Kershey added. “I don’t think it disappointed anyone.”

Hamilton scored 32 points, but Bryant poured in 35, including a buzzer-beating 3-pointer from long range to win it, 78-77, in overtime for Lower Merion.

“He made that jump shot from the coach’s box,” Hicks said.

“We had a shot to win it in overtime and we had the front end of a one-and-one and missed it,” Kershey added. “That would have put us ahead by four. But instead it was two.

“Then I remember Kobe making a 40-foot jump shot that won the game. And I don’t mean a throw – I mean a jump shot. We had two (defenders) on him at the time and he still made the shot. (Kobe) was unbelievable.”

It was, actually, one of two times Bryant played on Coatesville’s home court. The second came on March 9, 1996 when Lower Merion topped Wyoming Valley West in the opener of the 1996 PIAA State Tournament. The Aces went on to win the state crown.

About a month after the first meeting, on March 1, 1995, the two teams squared off again, this time in the semifinal of the District 1 Class 4A Tournament. The rematch was a happening and the Palestra was packed to the gills.

In an effort to slow down Bryant, Coatesville employed a gimmick triangle-and-two defense.

“After seeing him one time, I knew we couldn’t play (Bryant) straight man-to-man,” Kershey explained.

The Raiders led by as many as 10 in the first half, but were down a few points late in the game when Bryant fouled out.

“That’s when we thought we really had a shot to win, but 20-30 seconds later, Rip fouled out. That was the end for us,” Kershey said.

“We did hold Kobe down a little bit, but he was still good enough and he killed us with several big plays,” Kershey pointed out. “Holding him to 26 wasn’t bad.

“That was 25 years ago and people are still talking about it. I still have people tell me, ‘Rip didn’t commit that fifth foul.’”

Smith is one of them.

“It was a phantom foul,” he said. “I’ve seen the film. Rip wasn’t even near the guy with the ball.”

The third and final collision came, once again, in the district semis near the tail end of Kobe and Rip’s senior seasons a year later. There was such a mob scene at the Palestra that the Coatesville team bus got caught in traffic and tip off was delayed. It was reportedly a complete sellout an hour prior to tip off.

“It was jam-packed,” Hicks said. “We were the first (of two games). The second game was Chester-Plymouth Whitemarsh.”

To this day, Smith remembers the date: Feb. 27, 1996. He swears that the team bus left Coatesville early in case of traffic. But things bogged down the closer they got to the venue.

“We couldn’t get close to the Palestra because it was gridlock,” Smith said. “We had our players change into their uniforms on the bus. And then we finally got out and the guys ran the final few blocks.

Among the nearly 9,000 people wedged into the building that night was UConn’s legendary head coach Jim Calhoun, who was there to scout Hamilton.

“People were going berserk for tickets to that one,” Smith said.

“It was electric — the fact that it was Kobe and Rip for the final time,” Kershey echoed. “That was a huge matchup.”

Similar to a year earlier, Coatesville went with a box-and-one defense slanted toward Bryant.

“We were trying to wear Kobe down,” Hicks said.

The Raiders were ahead by six with three minutes to go, but Bryant took over down the stretch and led the Aces to a 70-65 win. He finished with 29 points, 11 rebounds, three assists and three blocks. Hamilton had 16 points and 13 boards.

“Rip didn’t have the game that Kobe had, but he played well that night,” Kershey said. “It was good enough to convince Jim Calhoun. I think I spoke to (Calhoun) that night. He was very interested in Rip.”

Kobe and Rip went on to have some classic duels in the NBA, but before graduating from high school they teamed up on the same squad at the 1996 McDonald’s All-American Game in Pittsburgh. Just like in AAU ball, the two were hotel roommates and led the East team to a 120-105 victory over the West.

The top two high school prospects in the state coming out of high school, Bryant was taken 13th in the ’96 NBA Draft and Hamilton went on to play three seasons at UConn. The Huskies won the 1999 national championship in his final college season.

The two then competed against each other through 14 professional seasons, and the highlight came in the 2004 NBA Finals. Hamilton’s Detroit Pistons took the best of seven series 4-1 over Bryant’s Los Angeles Lakers. Rip averaged 21.4 in the finals to lead the Pistons, compared to Kobe’s 22.6.

“The Pistons had five good players and the Lakers had Kobe and Shaq (Shaquille O’Neal),” Kershey recalled. “I remember saying at that time that a full house always beats two-of-a-kind.”

Kershey spent 28 seasons at the helm at Coatesville, and on Wednesday he said: “Kobe Bryant is certainly the best high school player I ever saw.”

Hicks spoke briefly earlier this week with Hamilton, who now lives in Florida.

“Rip doesn’t even want to talk about it because he’s still in shock,” Hicks said. “They go back a long way and now (Kobe’s) gone. It’s a wake-up call for all of us.”

Hamilton posted the following last Sunday on Instagram: “My body is so numb right now and (I) can’t make sense of this. My condolences to the Bryant family.”

Neil Geoghegan is a staff writer for the Daily Local News. You can reach him at ngeoghegan@21st-centurymedia.com. Follow him on Twitter @NeilMGeoghegan.