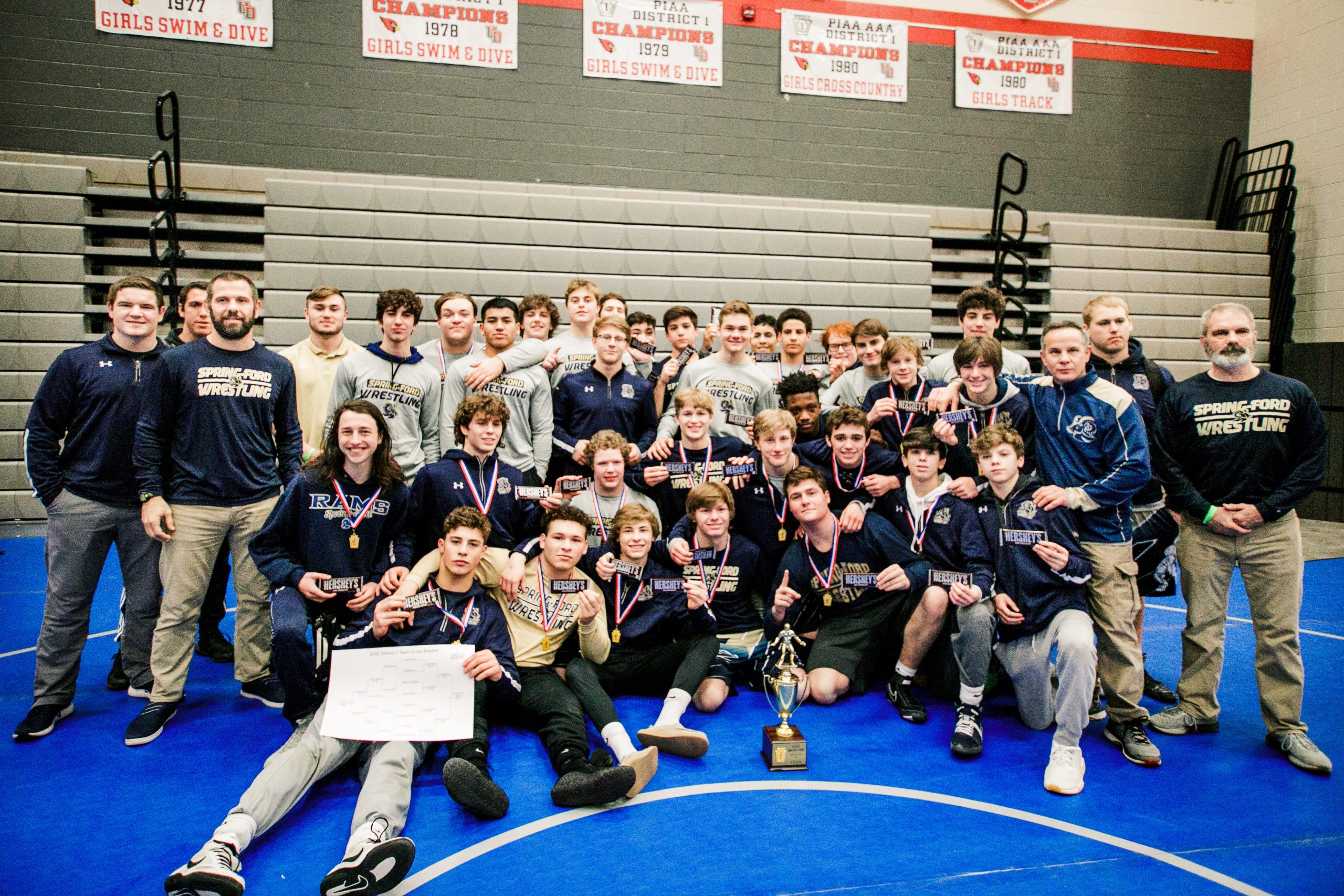 Dropped it to the ground and stomped it into dust … the same style the Rams used to claim their first District 1 Class AAA duals championship after years of coming up short.

“This was our fourth time in the finals,” head coach Tim Seislove said while embracing the program’s first district-championship trophy. “The way the kids came through was awesome. They all stepped up.”

Needles’ opponent, Domenic DeFalco, came in as the district’s second-ranked wrestler at 138, a two-time state qualifier and one win away from 100 for his scholastic career. But Needles rained on his parade with a 3:03 pin that gave the Rams a more-solid 24-17 lead after Quinn Tobin’s 8-2 decision at 132 put the Rams back in front 18-17.

“Zach had a great match,” Seislove added. “He stayed in good position. The fall gave us a lot of momentum.”

Cushman was in the position at 160 to clinch the match for Spring-Ford with at least a decision. He went several steps better, scoring a 3:16 pin on Kyle Goodwin, a wrestler touted for his strong rides in the top position.

“I’ve been practicing on the bottom … bridging, using my hips and turning,” Cushman said.

It was the strategy he used to reverse Goodwin and get the slap to put Spring-Ford up 36-20 with two weights left to contest.

“Xavier got into a little scramble,” Seislove said, “but he did a great job and got the fall.”

Joey Milano got the Rams going with a 38-second drop of Freddie Retter in the 195-pound opener. Jack McGill also pinned for Spring-Ford, dispatching Aaron Sanchez at the 3:30 mark in the 152 bout.

“We understood they (Quakertown) were tough,” Milano, standing at 30-0 for the season and 94 wins for his scholastic career, noted. “But we came out to wrestle. All of us showed up, and everyone did his job.”

Owen J. Roberts saw its duals experience end one win short of qualifying for the PIAA Class AAA tournament. The Wildcats fell to Council Rock South in their consi-semi, 56-15, to finish 2-2 in districts.

Undermanned Owen J —without Antonio Petrucelli, who was sidelined by the flu — was unable to answer the Hawks’ opening surge. Second-seeded Rock South scored 34 unanswered points at the start, ultimately clinching the victory with Mohammed Savriddinov’s major decision at 138 giving it a 44-5 lead with five weights left to contest.

“We wanted to get the best matchups and do the little things right,” head coach Steve DeRafelo said after seeing his team (15-5) bow out of duals. “We didn’t do that, and it cost us.”

Matt Englehardt stemmed the Hawks’ opening run with a 3:43 technical fall of Andrew Lindros at 120. It proved a brief respite, however, with David Forrest defaulting 3:11 into the 126-pound duel with an ankle injury.

“He’s been a warrior all year,” DeRafelo said of Forrest, who left wearing a protective boot and on crutches. “He comes back quick.”

Connor Leister scored a 7-1 decision over Tom Woloshyn at 138, Connor Quinn had a hard-fought 4-0 decision of Matt Colajezzi at 160 and Austin Boaman closed out with a 15-3 major on Aaron Schurman after South clinched the match.

“Our goal was to get to the state duals,” DeRafelo said, “but we got to wrestle against the top teams in the district. We just have to do the little things that make a difference.”

NOTES >> Spring-Ford will open the state duals Thursday against the District 2 champion. It went 2-2 at Hershey in 2019, eliminated in Saturday’s third-round consolations by Canon-McMillan 39-26. … Owen J. will host Souderton in a non-league match Wednesday, its only action prior to the District 1-AAA North tournament the weekend of Feb. 21-22 at Pottstown.

Spring-Ford looks for the fall as Xavier Cushman nears one at 160 pounds. (Nate Heckenberger – For MediaNews Group)