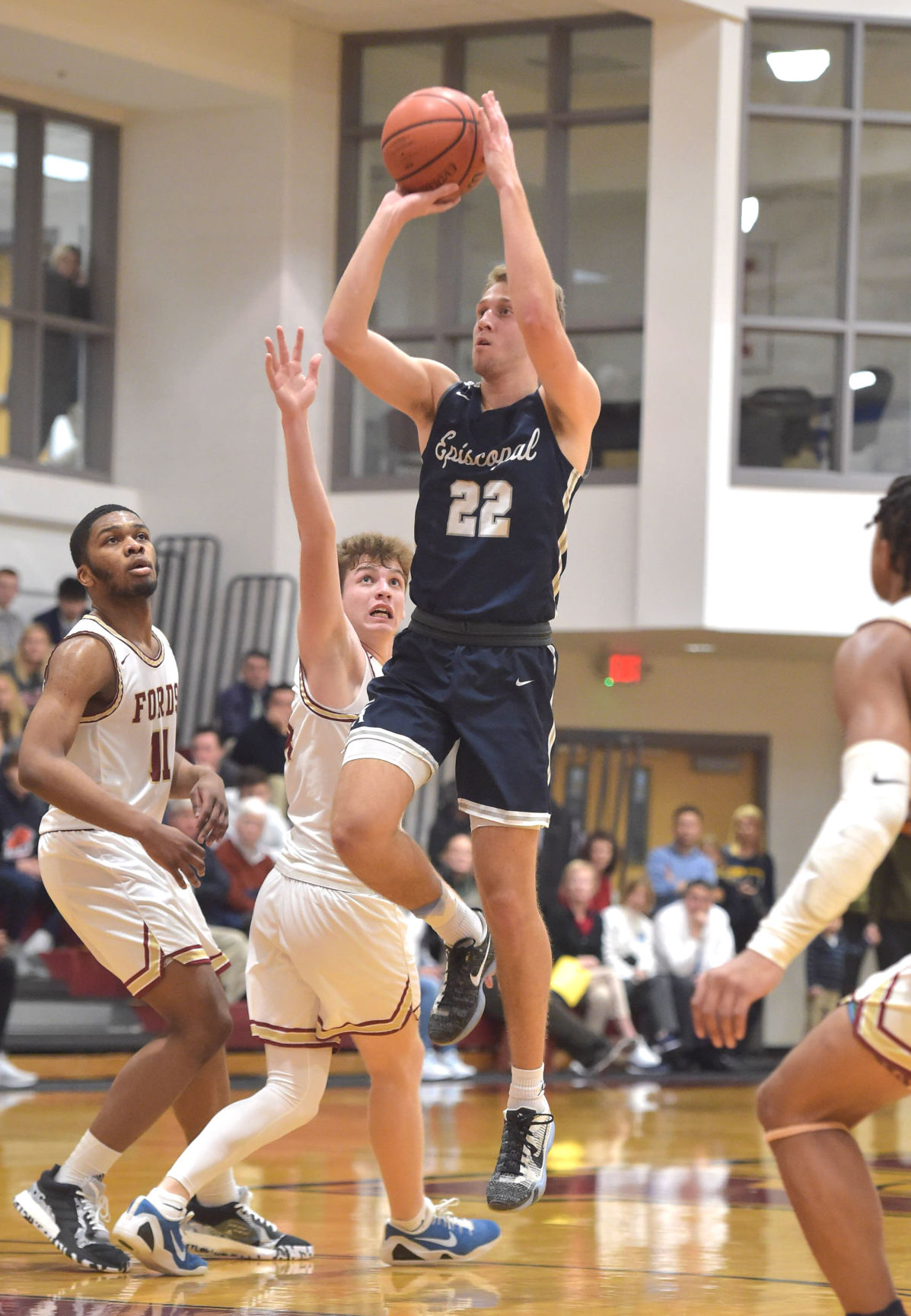 HAVERFORD — By the time Alex Capitano looked down the court on an inbounds play under the Episcopal Academy basket, the game was pretty well decided. The 40 points the Churchmen had on the board at that point, with three minutes to play, would prove to be more than rival Haverford School would get to, so what transpired next was more for emphasis.

Capitano spied Andrew Alikakos breaking free from the other eight players on the court and aimed a one-handed, 80-foot dart in his direction. Alikakos moved toward the basket, used two hands to control the laser of an outlet pass, and after one-dribble went up for an uncontested layup.

“It’s usually the other way around,” Alikakos said. “I’m usually the inbounder. There’s been 4-5 times that I’ve thrown one to him this year. He’ll dunk it, though. I didn’t dunk it.”

Dunk or not, it applied the exclamation point on a 46-34 Inter-Ac League win for EA, underscoring the main point of the rivals’ encounter: Where Capitano and Alikakos put together big-time performances, no one on the host Fords managed to do the same.

Capitano led all scorers with 20 points. At halftime, he held a 14-13 edge over the entire Haverford team, which at that point included nine players hustled into the game to try and stanch the bleeding.

“Those points were huge,” Alikakos said. “It felt like he didn’t really miss a shot actually. I think they only scored 34 points in the whole game, so that was obviously a low-possession game and I think a lot of those shots he created on his own, which is huge for us. It’s not like they were easy points. They were tough, challenged 3s, a lot of them, step-backs, contested finishes. He made some big free throws. He’s a scorer like that where he can really score 20, 30 points any given game. He can explode for points. And it’s really valuable.”

Alikakos’ contribution was more understated, with eight of his 10 points in the second half. He also grabbed 10 rebounds, seeming to deny Haverford second-chance looks at just about every turn.

Even if the Fords (6-9, 1-2) were comparable in terms of length, they didn’t match the determination in the paint that Alikakos and starting center Tommy Dennis showed.

“It’s huge. He’s one of the hardest-working players I’ve ever played with,” Capitano said. “He just crashes relentlessly and it’s huge for our team because it brings that energy that not many teams get.”

EA (8-10, 2-1) was in control most of the way, its modest two- and three-possession gaps looking more impressive in the face of the Fords’ enduring shooting woes. The Churchmen led by seven at the half and, aside from Zach Genther’s basket to open the third quarter, outscored the hosts 16-6 the rest of the frame.

Part of the reason was stellar perimeter defense. Haverford School missed 18 of its first 19 looks from 3-point range, surging late thanks to Christian Clover (2-10) to finish 3-for-22. EA stuck with its man-to-man defense most of the game, after starting with token ball pressure into a zone, and it kept the Fords frosty from behind the arc.

“In practice, we went over that they could all shoot,” Capitano said. “We knew that coming in that they were known for shooting the ball very well for the last couple of years. We ran them off the line in our zone a lot, and we went five (man-to-man) for most of the game, which is kind of uncharacteristic for us. But we were playing strong, we were pushing them off the line and getting them out of rhythm.”

That rhythm never returned to the Fords. Early, turnovers were the issue, seven of them in the first quarter. Then it was too much settling for jump shots.

Eventually, with the deficit growing as large as 17, they were forced to shoot 3-pointers, and the misses piled up, even as coach Bernie Rogers went 11 deep on his bench searching for answers.

“Everybody’s got to stay confident,” Clover said. “Keep shooting, shots are going to fall. We try to get to the basket, but at the same time, you don’t want to miss wide-open shots. You’ve got to still take them. For me, they weren’t falling. At the end, they started falling, so I kept shooting and tried to get my teammates involved.”

It certainly doesn’t help that Jameel Brown remains absent from that list of possible solutions, the sophomore sharpshooter having missed all but four games. He was on the sidelines Tuesday sporting a heavy wrap on his arm.

Genther accounted for seven of the Fords’ 13 first-half points. He finished with nine. Clover found his shot to tally 12 points, but no one else made more than two field goals in a 13-for-41 shooting performance (31.7 percent) from the field.

Where the Haverford supporting cast faltered, Episcopal’s stepped up. Alikakos and Capitano missed a combined 12 games this season, and rotation regular Malcolm Folk missed his eighth Tuesday. Those absences have forced others to step up, and the payoff is performances like Tuesday’s.

Sam Malloy had five points, including an and-1 to cap the third quarter, plus three steals. Will Delaney fueled the third-quarter run with five points. Dennis grabbed four rebounds.

It was the type of performance that makes all the nonleague lumps more palatable.

“In the out-of-league, we played a lot of tough teams, and it can go either way,” Capitano said. “It’s not like the league, there’s not scouting, so you never know who’s going to step up in those games. And we had a lot of those games, so they prepare us for games like this.”