At Your Service: Pottstown wrestlers Griffin, Thompson prepare for futures in armed forces 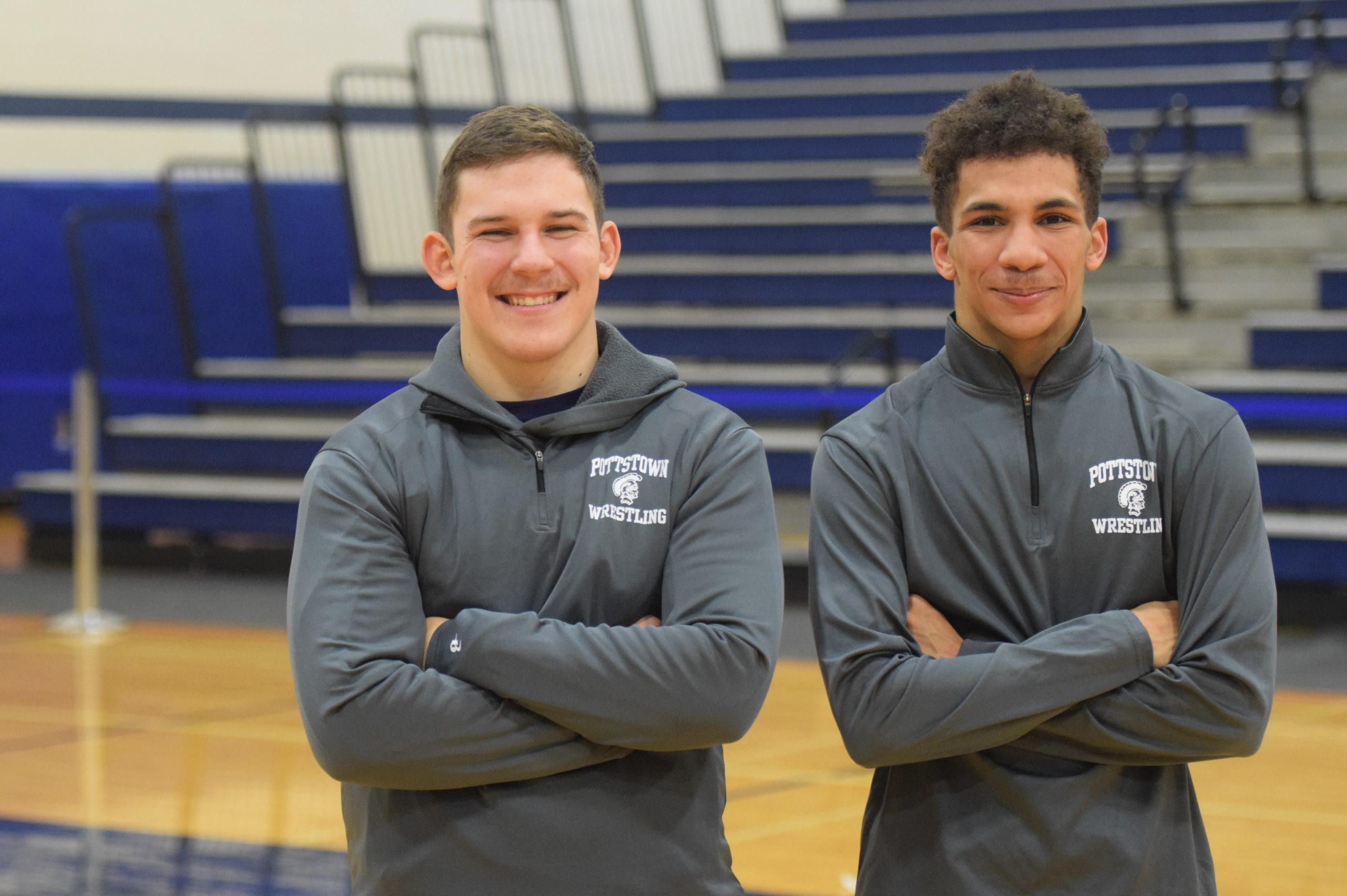 The parallels between athletic competition and military service remain well-founded.

Teamwork toward achievement of specific goals, development of self-confidence, the ability to follow orders, maintaining top physical condition and stamina … both endeavors embrace these concepts. At Pottstown High, two student-athletes will be moving from the one level to another later this year.

Demond Thompson and Zack Griffin, seniors and members of the school’s wrestling and football programs confirmed their intentions to enter the military after graduation. Thompson is heading to service in the United States Navy, and Griffin the United States Marine Corps.

“I always wanted to go in the service,” Thompson, a regional-caliber wrestler, said during a recent interview.

Griffin, on the other hand, was influenced by the service of his one grandfather, a Marine during the Vietnam War era.

“He used to tell us stories about his experiences,” Griffin recalled. Thompson is looking to become an aerographer’s mate, specializing in the reporting of upper atmosphere character and production of weather charts. Upon graduation from Pottstown this spring, he will be undertaking his basic training at Naval Station Great Lakes (Ill.), then specialty training at United States Air Force base in Mississippi.

Griffin, in turn, will do basic at Marine Corps Recruit Depot Parris Island (S.C.). His MOS (military occupation specialty) will be as an enlisted aircraft crewman.

“Of all the jobs I’ve had, in this one my mom has been supportive but scared,” he said. “Some of my family members are worried … classmates have expressed concern about current events.”

Both Thompson and Griffin have prepared for their military futures through enrollment in Pottstown High’s Air Force Junior Reserve Officer Training Corps (AFJROTC) program. JROTC is a military-regulated program designed to offer high-school students leadership experiences and motivate them to become better American citizens, combining classroom instruction with service to school and community, extracurricular and social activities and the chance to take on leadership roles.

For those high school students who are interested in pursuing a career in the military, JROTC offers relevant experience and an opportunity to improve entry-level rank.

“That will help out nicely,” said Thompson, a cadet this school year, “getting more responsibility and higher pay.”

Griffin and Thompson have enhanced their leadership development through their involvement in athletics. They’ve served in capacities as captains, currently leading the Trojan wrestling team by their on-the-mat examples.

Thompson, in his fourth season as a varsity grappler, is 12-5 competing primarily in the 132- and 138-pound weight classes. In the Pioneer Athletic Conference individual tournament this past weekend, wrestling at 132, he placed fourth after being forced to injury default his semifinal and medal match.

As a junior, he won a bronze medal in the District 1-AAA North tournament and qualified for the South East AAA Regional tournament.

Griffin, wrestling higher on the weight scale at 195-220, is 9-6 this winter. He is coming off a fifth-place showing at 195 in the PAC tourney while battling through a triceps injury.

Griffin was a sixth-place finisher in the Pioneer Athletic Conference tournament as a sophomore and is coming off a 21-12 campaign in 2018-19.

“This feels somewhat the same as military service, having an agenda that spans out the whole day,” he said. “It exposes you a bit on motivating people, getting them to do what you say … especially wrestling. The idea to keep going transfers to the military.”

While Thompson is targeted to enter basic training in late June, Griffin is looking at late August to start his military career. He’s been getting insights from his grandfather on what to expect at Marine “boot camp.”

They’re already pondering the possibilities of training in special operations, and reuniting while in the service, teammates and Trojans for the long haul.

“The interesting thing about our jobs is,” Griffin said, “if he’s on an aircraft carrier and I’m on an aircraft, we could see each other at some point if the aircraft lands on his carrier.”