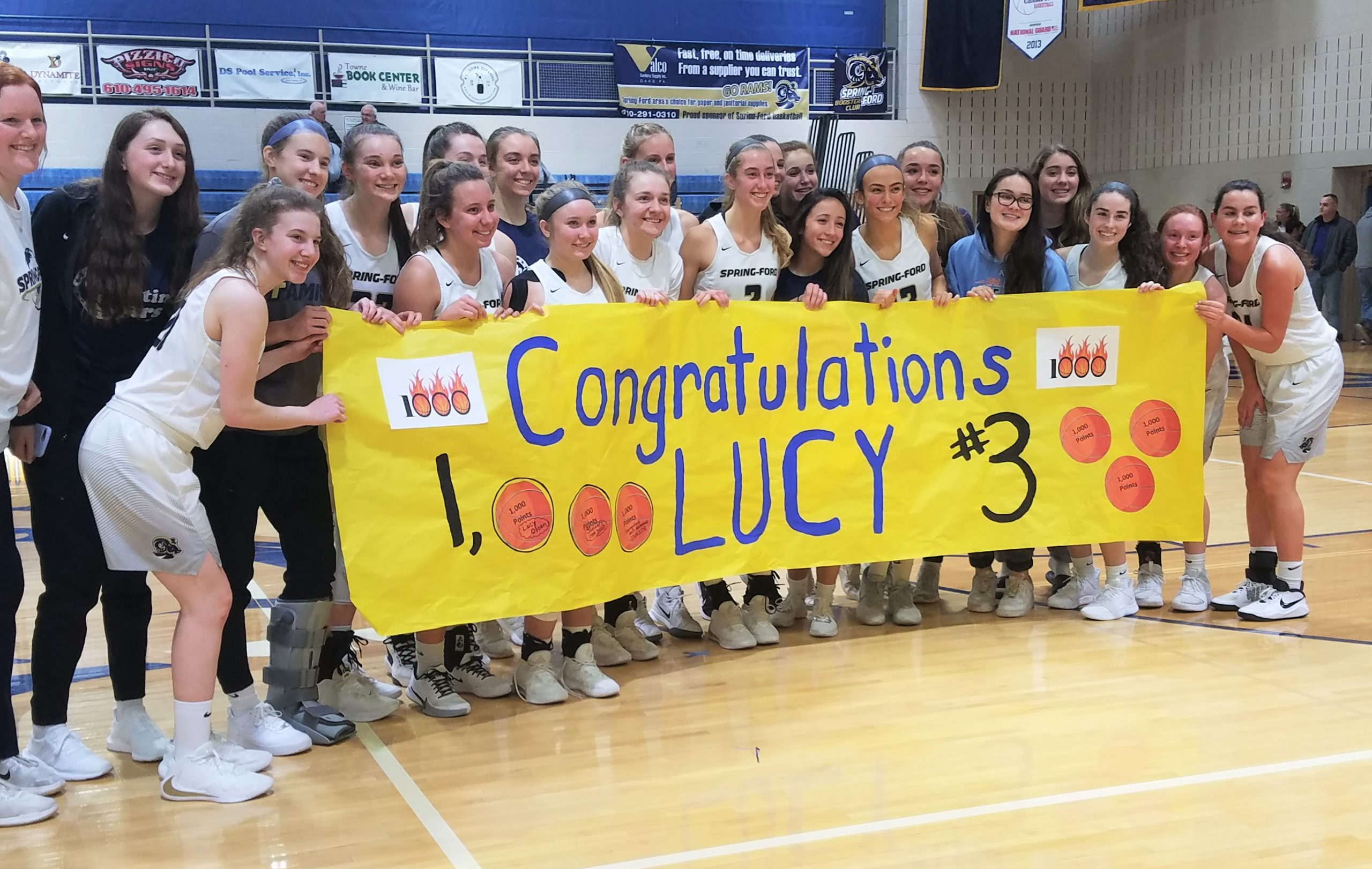 Spring-Ford junior Lucy Olsen rises up for a left-handed layup in the first quarter against Pottstown Tuesday. It was the 999th and 1,000th point of Olsen’s career. (Austin Hertzog – MediaNews Group)

Lucy Olsen scoring 1,000 career points was always meant to be.

The Spring-Ford junior guard made quick work of the 14 points that separated her from the achievement and with a left-handed layup with 2:33 remaining in the first quarter became the Spring-Ford girls basketball program’s fifth 1,000-point player, the highlight of the Rams’ 87-15 Pioneer Athletic Conference crossover victory over the undermanned Trojans.

“It’s exciting. I don’t think it’s hit me yet. I definitely wanted to get 1,000 points in my career. I didn’t think it would be this soon,” Olsen said with a laugh. “Everyone up there (on the banner) I looked up to, so it’s cool to be up there now.”

Olsen witnessed a 1,000-point milestone on Jan. 3 at Owen J. Roberts when Wildcat senior Olivia LeClaire reached the mark and had no idea her night was coming so soon.

“I didn’t think I was so close,” Olsen said. “Olivia LeClaire got it and I thought, ‘Wow, that’s awesome.’ And then last week I found out how close I was and thought, ‘Oh my gosh, mine’s coming up. This is crazy.’”

“There are a lot of things I really appreciate about Lucy, but what especially stands out is how unselfish she is,” McDaniel said. “This milestone, I know deep down is something you want to achieve, but there are more important things to her and they are all team-oriented. All the players know that and that’s why they respect, appreciate and love her for it.”

Olsen, who is averaging a PAC-best 20.2 points per game, was a program-elevating player since her freshman year and has only added to her game in the years since. And there’s much more to come, a fact McDaniel can’t hold his excitement over.

“It’s also so exciting because she’s a junior,” McDaniel said. “All of our other 1,000-point scorers did it as seniors so you sit back and realize, ‘Oh my gosh, she has another year and a half yet.’”

Joining Olsen in double figures were Mac Maloney (14) and Abbey Boyer (11) while 12 players scored for the Rams, which led 42-4 after one quarter.
Spring-Ford improved to 13-1 – its only loss coming to five-time reigning Texas champion Argyle in Orlando, Fla. – and is ranked No. 3 in District 1 Class 6A.

Freshman Tamya Jarrett’s seven points were a high for Pottstown, which is 1-13.

Morton was a former assistant under Joe Masleh in the 1990s when Pottstown was a contender in the league (champion in 1996 and 1997), an era he’s hoping to revive while turning the page from some recent lean years.

“It’s been quite a few graduating classes where these kids don’t know that this program was highly successful and competed night in and night out,” Morton said. “I have different projects I’m working on and one is getting a 1,000-point banner up in the building for both the boys and girls because they need to see that these things are attainable.” Pottstown fielded a team of only seven players Tuesday night and could not field a JV team due in part to some academic and disciplinary absences.

“It’s been a challenge. We work every day, they just get down sometimes,” Morton said. “It’s also tough because the culture has been losing, so that’s something we’ve been trying to battle and overcome. They really do battle, but like anybody else you hit a point where they start to waver. But you have to bring them back together, and they do. I’m proud of the way they show up every day and work hard.”

Though the score may not indicate, Morton said the Trojans achieved their goals Tuesday in rebounding, assists and turnovers, though he lamented missed opportunities at the free-throw line.

Sophomore Trinell Watson (four points vs. Spring-Ford) has been a bright spot for the Trojans with a 13.2 scoring average, sixth-best in the PAC.

“It’s been a struggle, but at the end of the day and I see some of the girls and what we’re accomplishing, I’m pleased,” Morton said. “There are brighter days ahead, I just have to make sure they see that.”