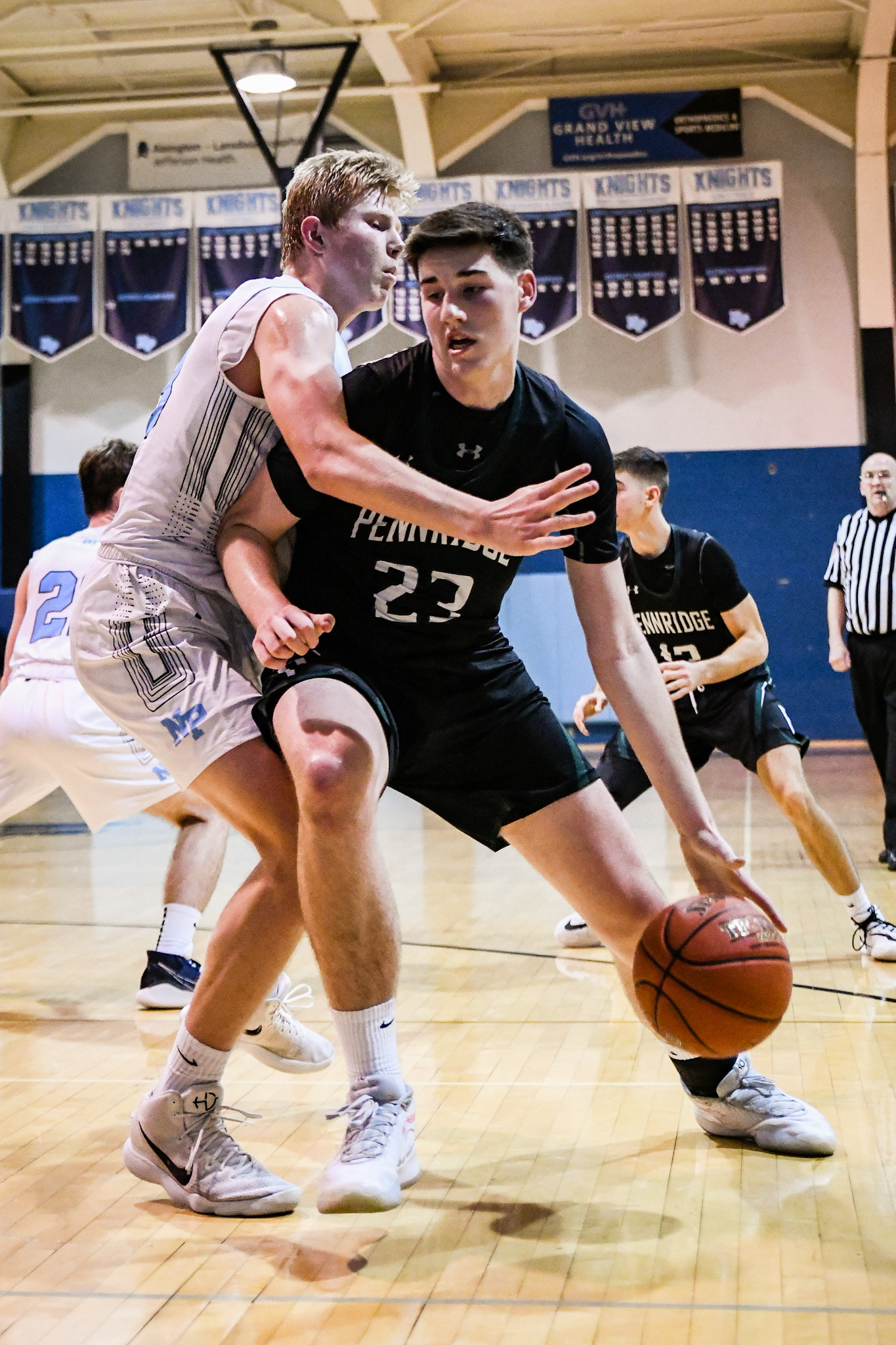 TOWAMENCIN >> Anthony Phillips began Tuesday night on the bench but from the senior forward perspective it’s only because the Pennridge boys basketball team can only put five on the floor at a time.

“I feel like we have seven guys that are all starters,” he said. “Although we have guys coming off the bench, it’s no different – we come in the game we’re playing big minutes. It’s not always the five guys that start that finish the game so that’s what really matters in the end.”

After the Rams slow start against host North Penn, Phillips provided an offensive spark at the start of the second quarter, draining back-to-back 3-pointers to put Pennridge up three in the SOL Continental matchup.

“I just came off the bench, hit open shots,” Phillips said. “I mean, a couple of them were real open looks so expecting to knock those down.”

Phillips finished with eight points in the quarter that ended with Pennridge taking a 31-27 lead into halftime. North Penn stayed close throughout the second half but Rams stiffened on defense in the fourth and held on for a 52-44 victory.

“Anthony Phillips just what a shot in the arm that was,” Rams coach Dean Behrens said. “Anthony comes in and he can shoot it, he just hasn’t shot as well yet this year. But he had confidence tonight – boom – and that was really big pick-me-up. You need that.”

Phillips scored 10 points while senior Trent Fisher collected 11 of his game-high 17 points after halftime for Pennridge (11-3, 6-0 conference), which allowed just five points in the final quarter for its sixth win a row over the Knights.

“I just think we did a better job in our defensive transition which we didn’t a do a great job the first half,” Behrens said. “They put a lot of pressure on you, they push that ball up the right side and they get some shooters wide open.”

Mike Chaffee connected on five 3-pointers in pacing the Knights (4-9, 2-4) with 16 points. Joe Larkins and Josh Jones each scored 10 points for the Knights, who pulled within 40-39 late in the third on a Jones bucket inside. The Rams, however, collected the game’s next seven points – six of those coming to start the fourth to go up 47-39 on a Fisher layin.

A Chaffee trey from the wing made it 47-42 but those were the Knights’ only points of the fourth until a Jones transition basket with 12.8 seconds remaining.

“We got good looks we just didn’t make shots,” North Penn coach John Conrad said. “We had four or five straight possessions where we got a good look and didn’t look it down. And it’s too long of a spell to go and playing a team like this.”

Luke Yoder posted seven of his 10 points in the first half as the Rams hit the midway point of SOL Continental play unbeaten atop the standings and two games ahead of second-place Central Bucks West.

After playing three times in five days – beating Central Bucks East last Friday, falling to Liberty Sunday – the Rams have a break until Saturday when it visits Haverford for a nonleague matchup at 4 p.m.

“Tomorrow, we’re having off, we’re going to watch (Pennridge grad) Sean (Yoder) play up at Lehigh (for Navy),” Behrens said. “No practice, Just relax and have a good time up there.”

North Penn’s Josh Jones (13) throws down a big dunk to energize the crowd against Pennridge during their game on Tuesday, Jan. 14, 2020. (James Beaver/For MediaNews Group)

North Penn has nine games remaining to make a push for a spot in the District 1-6A playoffs. The Knights entered Tuesday 29th in the district rankings – Pennridge was eighth – with the top 24 making the field. The Knights finish the week with a two road games, taking on Souderton 8 p.m. Thursday then facing SOL National leader Bensalem 1:30 p.m. Saturday.

“Our backs are against the wall,” Conrad said. “We’re going to have to play consistently down the stretch to have a chance.”

Consecutive baskets by Jones and a Chaffee triple sent North Penn out to a quick 7-0 lead Tuesday but the Rams with the next eight – Fisher draining a three then finding Luke Yoder for another trey for a 8-7 advantage.

“They came out and hit us 7-0 and the way they shoot threes you just never know what’s going to happen,” Behrens said. “But we responded. I was ready to call timeout and I decided well, I’m not going to call timeout, I’m going to see – we scored a bucket right away. Once we hit that bucket, made it 7-2, it seemed like we settled in.”

BOYS #BASKETBALL: @npknightsbball’s Mike Chaffee hits the corner 3️⃣ & draws the foul 2Q vs. Pennridge. He made the free throw to complete the 4-point play. pic.twitter.com/dV1BKcFg7D

A Matt Swanson basket had the North Penn leading by five before Christian Guldin scored on a drive down the lane to get the Rams within 16-13 at the end of the quarter.

Phillips knotted the contest at 16 on a three from the right wing then after the Rams forced a steal Phillips hit a triple from the left wing.

“I’d definitely been struggling shooting the ball but I don’t know the last couple weeks I feel like it’s been coming together,” Phillips said. “So tonight, just pulled it all together.”

North Penn tied the game at 21 on a Chaffee three but the Rams put together an 8-2 run to take the lead for good. Phillips’ long two-point jumper made it 27-23 with Fisher finding a cutting Luke Yoder for a six-point edge.

Chaffee drained a corner three and was fouled – converting the free throw for the four-play to cut the margin to 29-27 with 50.3 seconds left in the half. Guldin, however, hit a one-handed runner to give the Rams the 31-27 halftime lead.

Pennridge pushed its advantage to six three times in the third quarter, the last time after a Fisher basket inside made it 40-34. A Chaffee three followed by two from Jones down low had the Knights trailing by just a point at 40-39.

A Fisher free throw with 15.6 seconds left gave the Rams a 41-39 lead at the end of the third. Fisher opened scoring in the fourth on a putback with a Colin Post basket increased the lead to six. Fisher then finished a give-and-go with Luke Yoder to make it 47-39.

BOYS #BASKETBALL: @PHSRamsHoops’s @trent_fisher_x & @lukeyo4 with a nice give & go that ends with a Fisher layin 4Q vs. North Penn. pic.twitter.com/VplZK5APzA

“I like having Trent on the team, makes me look like a good coach,” Behrens said. “Simple, get him the ball. And you know what he’s doing though, he’s changing the game offensive and defensively if you noticed. And he can guard guards and guard the kids that can shoot the three. He can get out there and do that, it’s impressive.”

Chaffee’s fifth and last 3-pointer of the night had the Knights’ deficit at 47-42 but North Penn did not score again until the final seconds when Jones’ basket made it 50-44. Luke Yoder gave the Rams the eight-point win with two free throws at 9.1 seconds.