Defense becoming third star for Coatesville with Ortega and Bryant 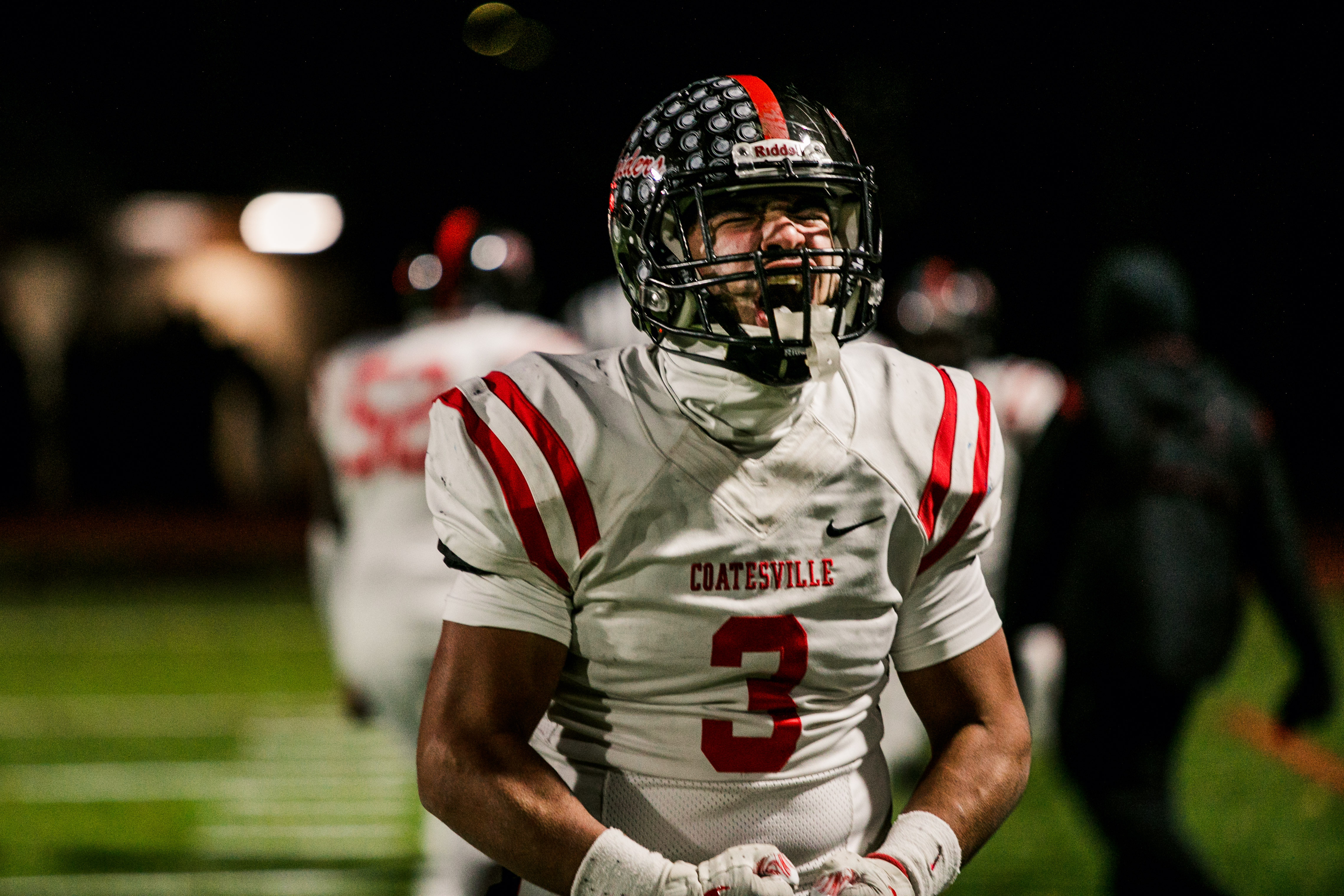 DOYLESTOWN — For the second straight week, Coatesville found itself trailing 7-0 after one quarter.

The likelihood of teams holding the Red Raider offense down for an entire 48 minutes is very, very unlikely.

That leaves the defense to figure things out. And for the second straight week, the defense made the right adjustments, Coatesville’s offense hit some big plays, and the No. 7 Raiders won their 10th straight district playoff game, 41-24, over the hosts, No. 2 Central Bucks West.

“We’re just clicking out of nowhere,” Coatesville defensive end John Ruttman said. “They think they have us but we come back and hit them in the mouth.”

The Bucks (10-2) started as ideally as possible, using a 13-play, 57-yard drive that took over six minutes of clock to jump out to a 7-0 lead. They punted once in the half, but scored their next two possessions and went to the break up, 17-13.

West wouldn’t find the end zone again until the final minute, when Coatesville was up 24 points.

“It was huge for us,” Coatesville coach Matt Ortega said. “The adjustments we had to make at halftime, with them running the ball to the right side all the time, we made the adjustment and made the stops we needed to make. We really just felt like they couldn’t stop our offense, so we made sure we gave our offense to give us a chance to go ahead.”

The Coatesville that everyone had grown to known and potentially love (depending what side you’re on) the past couple seasons is different from the 2019 edition.

That’s not a knock, more just reality. The 49-point explosion the Raiders (9-2) had in the first round was a weekly occurrence the past couple seasons. Now it’s more of a rarity. This team has to grind things out a little more.

The defense has been up to the challenge, maybe taking a collaborative place as the third weapon, along with quarterback Ricky Ortega and receiver Dapree Bryant.

“The defense was huge tonight,” Ricky Ortega said. “They made the adjustments and balled out and they won us the game in the second half.”

Ortega and Bryant have been key cogs in Coatesville’s reign as back-to-back District 1 champs, but were asked to do more, Friday, than likely ever.

It took until the 22nd offensive play before a player not named Ortega or Bryant ran or caught the ball. Just five out of 56 plays did the ball not end up in either Ortega or Bryant’s hands.

Bryant finished the night 167 rush yards and a touchdown, catching six passes for 57 yards, as well. Ortega ran for 132 yards and three scores, throwing for 190 and another TD.

“We’re in the playoffs and those two have won a lot of games for us,” Matt Ortega said. “This time of year you have to put the ball in your best kids’ hands. Those two were ready for the challenge. They have all those doggone games of experience in the playoffs so we rode them and they stepped it up.”

Prior to Ortega’s 81-yard touchdown pass to Artie Burgess in the fourth quarter, the dynamic duo accounted for 85 percent of Coatesville’s yards from scrimmage. Ortega said it may have been the best pass he’s ever thrown, and it all started on an audible called out by offensive coordinator Jim Cantafio from the sideline.

If the help comes, on either side of the ball, Coatesville becomes that much more dangerous.

“They’re dynamic,” CB West coach Rob Rowan said. “(Ortega) hurt us with his legs more than anything in the beginning of the game and then obviously hit that deep ball. He’s a special kid and obviously (Bryant), in my opinion, is one of the top three, four players in the state with how dynamic he is. He’s tough, he’s physical, and obviously his speed speaks for itself.”

Third-seeded Garnet Valley is Coatesville’s next opponent, for the third straight year, in the district semifinals.

It’s fair to assume Ortega and Bryant are going to figure things out. What Coatesville needs is for that defense to maintain its high level of play against a high-octane option offense.

“They’re gonna hit us in the mouth and we’re gonna hit them right back,” Ruttman said. “It’s going to be a dogfight.”