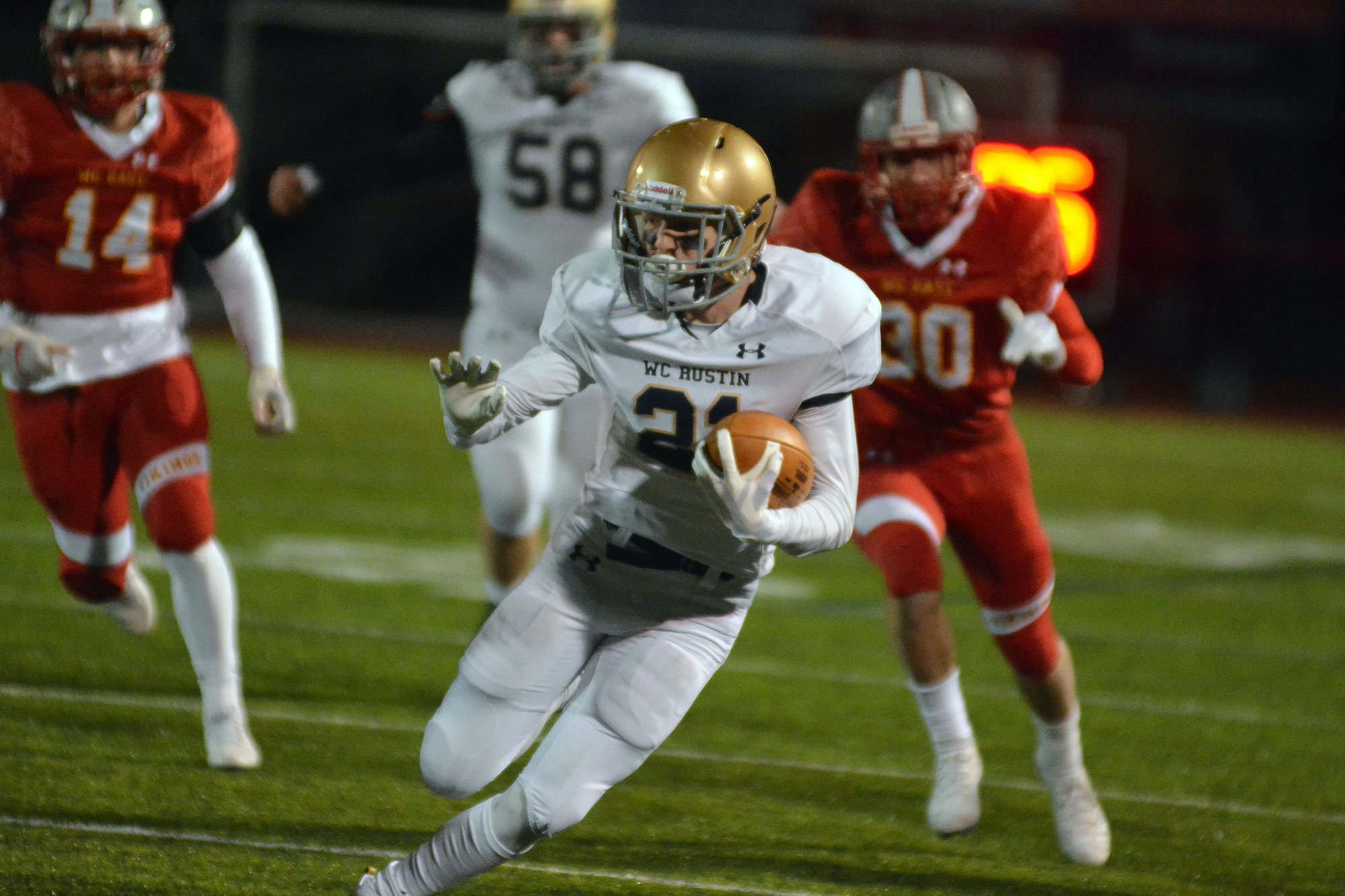 WEST GOSHEN >> Playoff winning football teams are the ones that bring the most emotion and execution to the playing field.
Friday night at a frigid Harold I. Zimmernan Stadium, the seventh-seeded West Chester Rustin Golden Knights avenged a regualr season loss to No. 2 West Chester East and took home a 14-7 win over the Vikings in the second round of the District 1 Class 5A playoffs.
The win puts Rustin into the semifinals next Friday at No. 6 Academy Park, which defeated Penn Wood, 8-6, Friday night.
West Chester Rustin (9-3) held the Vikings (9-3) to just 129 yards of total offense and held the county’s leading rusher, Kyle Cichanowsky, to just 76 rushing yards on 23 carries.
“We really wanted revenge on them after they beat us in the regular season,” Rustin running back Nick Madonna said. “Our coaches had us really pumped up and Drew Gallen played out of his mind tonight for us. And our defense really controled the game and did not give anything up.”
Gallen was definitely a difference-maker for the Golden Knights. Gallen rushed for 150 yards and two touchdowns and was a force, along with Madonna, all night as the Golden Knights piled up 231 rushing yards and only threw three passes the entire game.
It was Gallen who took a pitch from quarterback John Crispino midway through the second quarter and darted along the left sideline 61 yards to give the Golden Knights a 7-0 lead.
Meanwhile, the Rustin defense, led by Matt Montgomery and sophomore Anthony Meadows, was throwing up a road block to anything the usually potent Vikings offense offered.
But, it was the Vikings who started the second half with a blast as John Wileczek roared 56 yards with the second-half kickoff. Three plays later, Wilezcek skirted the right side for a nine-yard touchdown and it was a 7-7 game early in the third quarter.
“They got the return but our defense, which has carried us all year, was great tonight,” said Rustin head coach Mike St. Clair. “Matt Montgomery, Anthony Meadows, Travis Reilly and our secondary, with Dan McKnight and Mike Fannon, were all big for us tonight.”
After a Viking three-and-out, East punted to the Golden Knights, who drove down the field with runs by Madonna and Gallen. Gallen capped the drive by taking it the final four yards to make it a 14-7 game after three quarters.
West Chester East had its chances in the fourth. But quarterback Ryan Duell was picked off twice in the second half. The first one came on a second and eight play, with Rustin’s Dan McKnight darting in front of the receiver and picking it off at the 50-yard line, returning it to the Vikings’ 31.
“I wanted to make up for the previous play when I droped the ball,” McKnight said. “And I wanted revenge and I saw the deep route and I just broke on the ball. We were all fired up for this game, especailly after losing to them the first time. But, this is better, what a great feeling.”
The East defense held and the Vikings had the ball back with 2:15 left at their own 5-yard line. Duell dropped back to pass and looked down the right side, but Mike Fannon jumped the route and picked the ball off, sealing the road upset against the No. 2 seed.
“Our defense has done it all year for us and they did it again tonight when it really mattered.” St. Clair said.