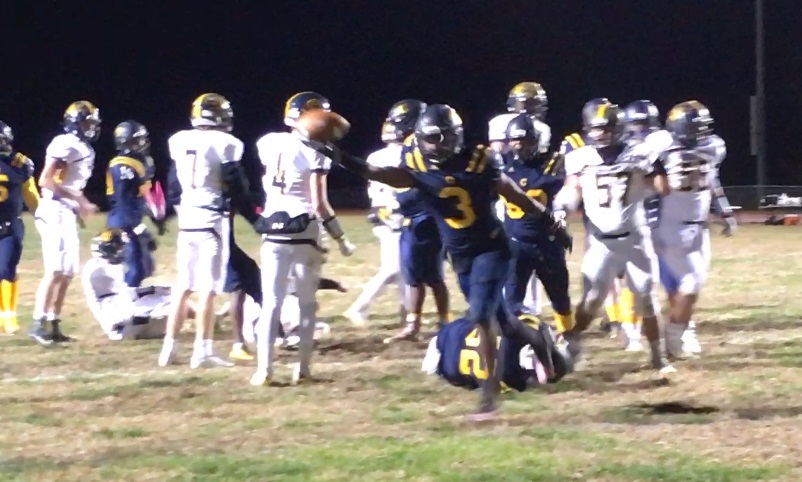 CHELTENHAM >> Jamir Barnes put everyone back on notice Friday night.

The Cheltenham senior hadn’t been his usual explosive self for a couple weeks while dealing with some injuries. He didn’t have to rush back either, with his teammates more than picking up the slack but the Panthers are different team, a strong team and a better team with a full-strength Barnes back in the mix.

Well, he is back and Unionville had to witness it the hard way as Barnes churned up more than 200 yards of total offense and top-seeded Cheltenham’s defense posted a second half shutout to topple the No. 9 Indians 35-21 in their District 1-5A quarterfinal.

“I did a lot of rehabbing, my trainer got me right and I worked all week trusting I was good to go,” Barnes said. “It was definitely a credit to my line. We went out all week and worked on run schemes and ways to find open holes and another big part was my fullback Siddiq Williams opening up big holes for me.”

Barnes carried the ball 19 times for 141 yards and three touchdowns while adding three catches for 55 yards and a score, a 34-yarder that capped off the game’s opening drive. The senior also played a high number of snaps at defensive back, so his coach Ryan Nase wasn’t overly shocked when Barnes said he was feeling pretty tired after the game.

A broken pinky finger among other minor maladies had somewhat limited Barnes during the regular season and he didn’t even play in the team’s Week 10 win but guys like Williams, Sam Sykes, Nate Edwards and Jon-Marc Foreman along with quarterback Adonis Hunter had done their share.

Unionville coach Pat Clark noted that with Barnes in the lineup, the Panthers become a much tougher offense to contain.

“Not only does he have good straight-ahead speed, but he’s elusive and he runs through tackles and has good leg drive,” Clark said. “It’s why he’s an FCS kid, he’s got multiple offers and he’ll be a really good player at the next level. When we wrapped up and tackled him, it was good but he runs through tackles and when he gets to the next level, he’s tough to catch.”

Unionville figured the best way to limit Cheltenham’s offense was to keep it off the field. The Indians are a run-heavy team to begin with but they had an extra emphasis on keeping the ball moving behind the offensive line and running the clock down that way.

Senior quarterback Blake Charlton found Declan Boyle to tie the score on a seven yard touchdown late in the first quarter. It was the start of a running trend in the first half where the Indians would score, only to see Cheltenham go back in front.

Edwards ran the ensuing kickoff back 94 yards for a 14-7 lead but Unionville responded with a seven-play drive capped by a one-yard Charlton plunge to tie it back up.

“When you look at them, they live off the big plays,” Clark said. “They create a ton of big plays so what can you do to limit the big plays and keep them snapping the ball? They got a few on us, they’re an explosive team and that turned out to be the difference.”

After a punt with 4:05 left in the first quarter, the Cheltenham offense didn’t get back on the field until the 7:10 mark of the second quarter. Edwards’ kickoff return gave them a score, but a fumble on the kickoff following the Charlton run gave Unionville a chance to take its first lead.

Unfortunately for the Indians, a botched handoff at the Panthers’ 15 led to a fumble and Cheltenham recovering. Sykes had the big play on that drive, ripping off a 43-yard run to help set up a four-yard score for Barnes to make it 21-21.

“I think people forgot how good he was just because we have so many other weapons,” Nase said. “People forget we have one scholarship kid on this team and it’s Jamir Barnes. He proved it tonight and he’s proved it with his play on defense.”

Unionville was able to march down the field and tie the game again but it came at a cost. Charlton was injured on a run with a little less than three minutes remaining and the senior did not return to the game. Clark said afterwards that Charlton will be fine, but he wasn’t able to go back in.

While Charlton had been performing very well, his teammates were able to pick up where he left off. Weston Grim took over and finished the drive with a 23-yard run and he and sophomore Matt McCloskey would share the quarterback load in the second half.

Charlton had 89 rush yards and 23 passing yards before exiting, while Grim finished with 83 yards on the ground.

“We have a lot of tradition, the words rebuild or reload are never used in our program, here’s the expectation and you have to live up to it,” Clark said. “I thought our kids did that. We run the football, so we had enough ways to run the football and there were a couple turnovers that hurt us. When you don’t have your whole playbook, you can’t make mistakes.”

Nase said Charlton was the player who most concerned him game-planning but noted Unionville’s system allowed them to fill in as seamlessly as possible.

With the game knotted at half, the Panthers had to regroup during the break. Late in the second quarter and during the third, the Panthers threatened to crack apart from within and senior tight end/linebacker Jon-Marc Foreman thought there were too many guys playing as individuals and not as teammates.

Foreman helped get the defense back on track with an outstanding second half. The senior, who had a sack in the first half, recovered a Unionville fumble with 4:05 left in the third quarter that set up Cheltenham’s go-ahead drive capped off by a 17 yard Barnes run with 1:19 left in the period.

At the end of the third quarter, the Panthers finally all came together. Nase credited his team’s leaders for being the unifying force and said it showed their growth as young men as well as football players while taking the blame himself for putting the team in that position.

Back together, there was still a stand to make. Unionville drove right down the field to start the fourth quarter, with McCloskey completing a fourth-down pass to keep the chains moving and got all the way to the Panthers’ 15.

There, Foreman laid a huge hit on McCloskey on a sack, dislodging the ball for Stacy Hagains-Young to recover.

“It felt amazing,” Foreman said. “I was overwhelmed. I just felt like I had to make a play, I couldn’t let them score there and catch up.”

“He’s the Swiss Army Knife, it’s what they started calling him this week and it’s a great description,” Nase said. “He probably plays more snaps than anybody on this team. Our three linebackers will hit you, they’re not afraid to hit and while they’re not the biggest of guys, they run really well and will smack you in the face.”

Cheltenham had to punt, but the defense got another stop and with a chance to ice the game, Barnes did more than that. The senior picked up a first down, then he used a 15-yard run to get another one before breaking off a 47-yard run for a touchdown to ice the contest with 1:52 left.

For good measure, TJ Harris made a leaping one-handed pick on the next snap as Cheltenham recorded a school-record 11th win of the season. The Panthers will host No. 4 Kennett next week in the district semifinals.

“In practice, Coach Josh (Plenski), our running backs coach, tells us one cut and go and that’s what I did,” Barnes said. “It felt amazing, I trusted my line and the hole was there.

“Our whole goal was to go from a good team to a great team and like our coach says, it’s all about progress and we had to be better than last year.”

In game unlike any other, Johnson comes up big for Academy Park
Defense becoming third star for Coatesville with Ortega and Bryant