In game unlike any other, Johnson comes up big for Academy Park 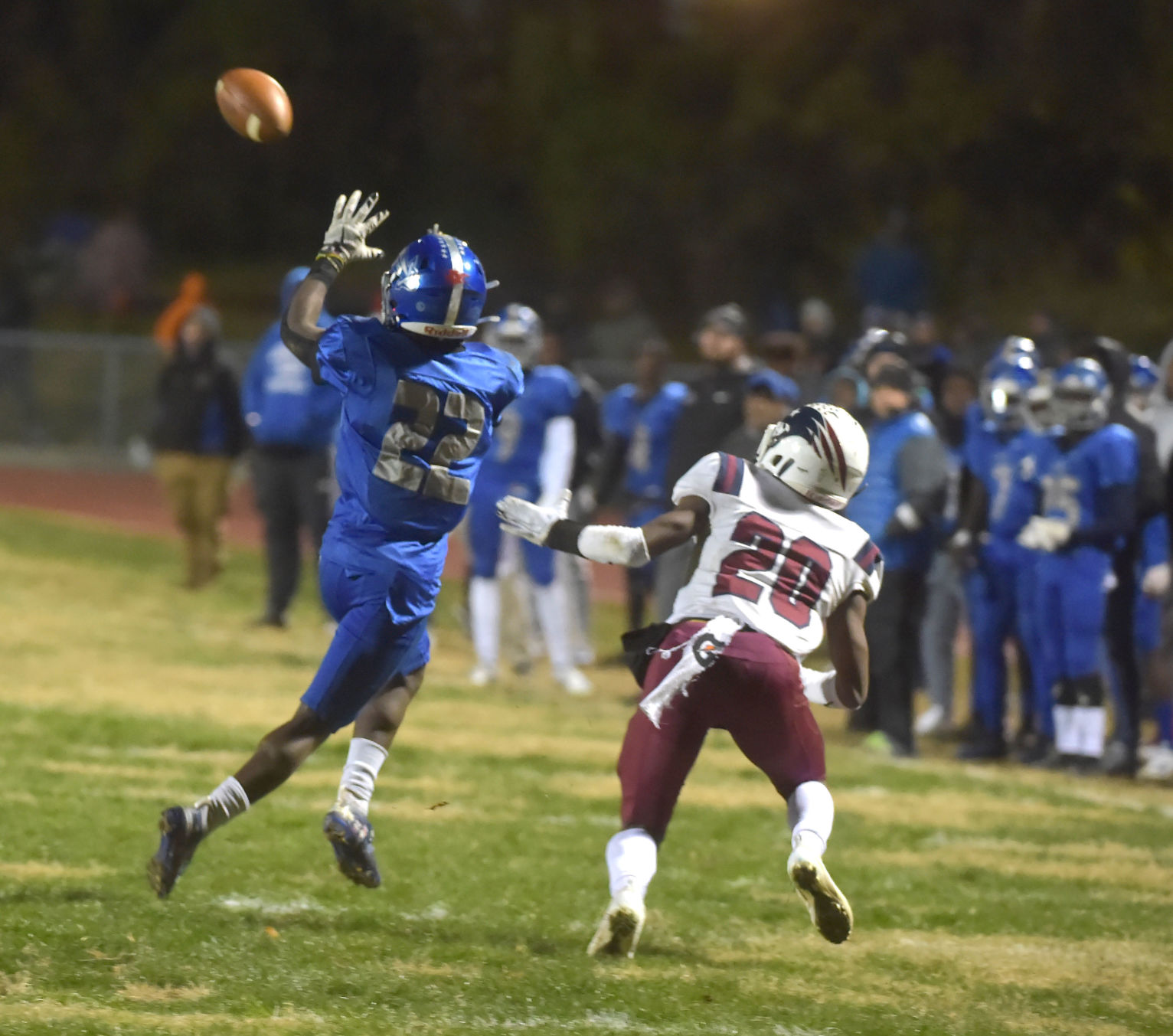 Malik Johnson sprints out and catches a two-point conversion pass from Academy Park quarterback Barry Brown early in the first quarter Friday night, two points that would stand as the difference in an 8-6 Knights win over Penn Wood in a District 1 Class 5A quarterfinal game. (PETE BANNAN – MEDIANEWS GROUP )

SHARON HILL — As Academy Park took its final snap Friday, ran out the clock and ran into another round of the District 1 Class 5A football playoffs, Malik Johnson took another look around Knight Park.

“I always wanted,” he would tell himself, then would repeat later, “to play in a game like this.”

Johnson is Academy Park’s No. 1 cornerback and valuable offensive piece, a senior who was perfect for the game he just helped win. His interception of the first pass of the fourth quarter kept the Knights ahead of Penn Wood. And three quarters earlier, his two-point conversion catch from Barry Brown would be the difference in an 8-6 victory.

In a week, the Knights would be made to entertain West Chester Rustin, and Johnson will be there to try to win a spot in the Class 5A district final. It may be a good game. It may be a great game. But it will not be what the two hours of fumble-jarring hits, penalties, growls, snarls and boasts that he’d just experienced.

There hardly will be many, as it was said, games like this.

In a region-wide tournament, it was a neighborhood rivalry.

And in the context of the truncated Del Val League, it was the unofficial league championship game between two teams that had finished the regular season with one league loss.

And it was played under win-or-get-out stakes, before a sizable crowd that was both bitter and bitter cold. And it was caked in revenge, with the Patriots having publicly included it in their “revenge tour.” And it was rough.

So for all those layers of uniqueness, the whole affair was exhausting to both teams. Trouble for the Knights is, they are at the point of the season where exhaustion is not an option.

Now what? Where can a coach turn for motivation, days later, after such an intense game between neighboring rivals.

“And then there is one more thing: You get the chance to play again.”

That will be fine with Johnson, a senior who remembered seeing a Penn Wood-Academy Park game at Knight Park four years ago, hoping, but not convinced, he would ever be able to make such a difference in one.

“These are the types of games you dream of as a kid,” Johnson said. “I watched this game as a child, as a freshman. I never thought that would be me in that situation.”

Academy Park’s Malic Patterson jumps over Penn Wood punter Niheim Sheppard, who went down at the 1-yard line and set up the Knights’ only touchdown of the night in their first play from scrimmage in what became an 8-6 victory over Del Val League rival Penn Wood Friday evening.

Before Johnson mattered late, he mattered early. Academy Park having won the toss and deferring, it held the Patriots in deep. When a punt-snap was scrambled, the Knights had possession at the Penn Wood 1, just a minute into the game. On the first play, Brown scored on a short keeper, causing Vosheski to make a decision. For reasons he would not elaborate on, his kicker was unavailable Friday. For that, why not go for the two?

The Brown-to-Johnson conversion flip would be run to perfection.

“Special teams are the most important thing on a team,” Johnson said. “Without special teams, you probably don’t win the game.”

Penn Wood did answer Brown’s touchdown with 5:07 left in the quarter when Elijah Gleplay returned a fumble 50 yards. The Pats’ conversion pass, however, failed. And three quarters and several dozen jarring hits by both teams later, the score was still 8-6.

“I can’t believe it,” Vosheski said, with half an exhale.

What he could believe was the difference made by Johnson.

“He’s been playing better and better and better,” he said. “This year, he has been spot-on, 100 times better than he was last year. And we are asking more of him this year. He starts on offense and he starts on defense. He’s on special teams. He’s on everything. Whereas a year ago, he just played defense. So we’re asking a lot more of him, and he’s playing a lot better.”

Enough Knights are playing well enough to have moved to within two victories of a district championship. And maybe winning the unofficial Del Val title or defeating Penn Wood for a second time technically didn’t rise to that level of significance. But it did feel that way.

“It was the ‘unofficial’ tie-breaker, just because we don’t have one,” Vosheski said. “But we have a lot of work to do before we can just claim something.”

The Knights had issues with a Patriots defense that supplied some volcanic hits, with Daniel Doegan, Abrahim Sackor, Menwon Sakpeidah, Jordin Jones, Christian Suber and even two-way quarterback Desmon Johnson chipping in with massive hits.

But the Knights missed enough tackles to advance, and were able to survive the rest.

“I was waiting for this game,” Johnson said. “I thought we might need another score to win the game. But in the clutch, we did what we had to do and held them to one touchdown.”

In many ways, it was just like the Penn Wood-Academy Park games of his dreams.

In enough others, however, it was one unlikely to ever have as many high stakes again.