Stevenson back healthy, so is Chester’s defense 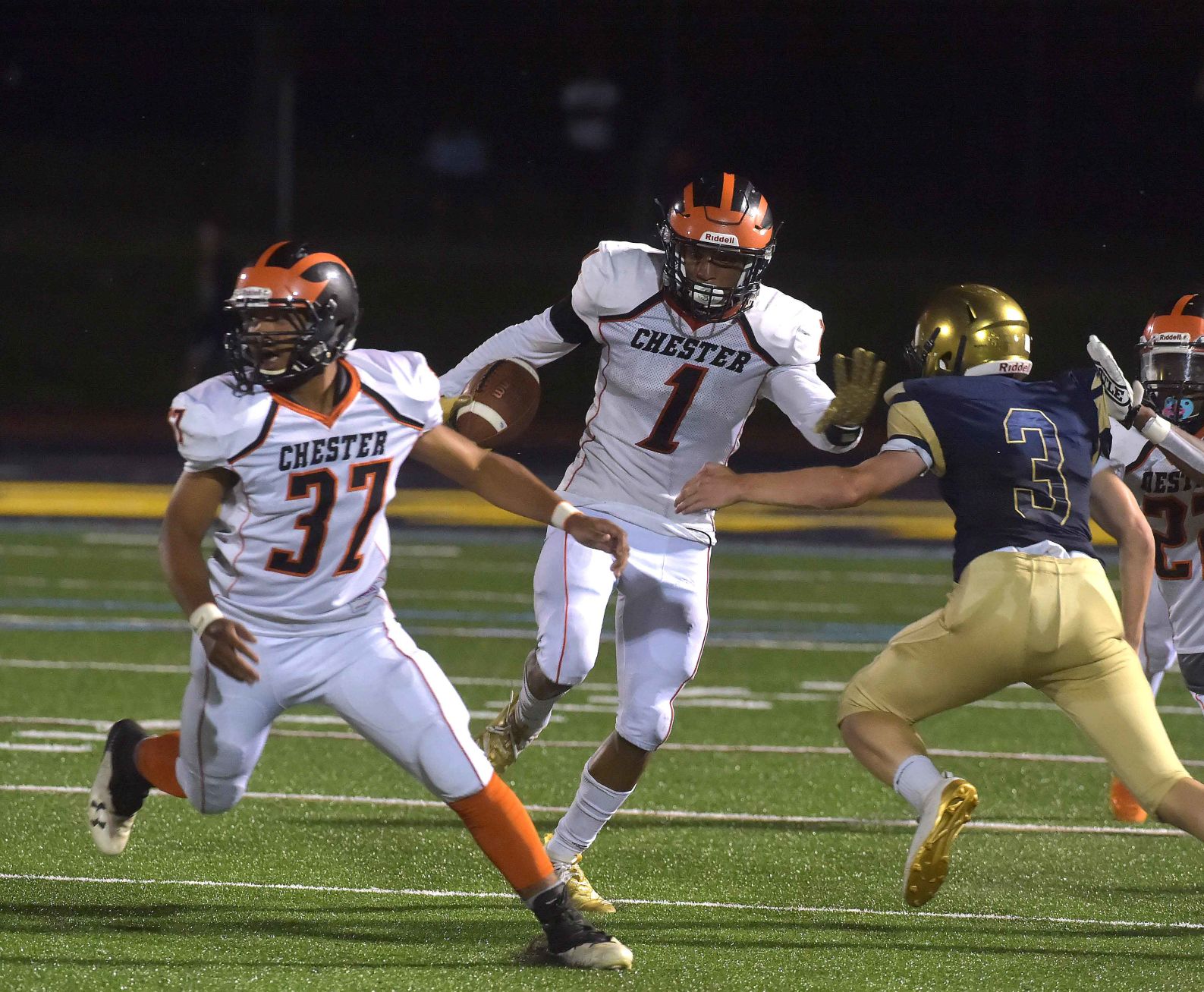 Chester's (1) Malik Langley gets good blocking from Mike Watts as he breaks out for a punt return touchdown in the third quarter against Sun Valley. (Pete Bannan/MediaNews Group)

CHESTER — Along a generally unhappy Chester sideline last week, few were as down at the conclusion of a loss to Penn Wood as quarterback Dymiere Stevenson.

With three straight losses to end an arduous four-game road swing, the Clippers were figuratively limping home. Stevenson, with a bruised back that required a CAT scan and cost him the second half against the Patriots, was literally limping there.

But eight days later, with Stevenson healthy and the Clippers back on home turf for a raucous homecoming, the mood could scarcely have been more different.

Chester dominated Calvin Coolidge High (Washington D.C.) on both sides of the ball, led by four Stevenson touchdowns in a festive 61-6 rout.

“It’s a very big accomplishment for me,” Stevenson said. “My team, they were really down during the Penn Wood game. I was real mad that I couldn’t get back in there. And coming back for a big win like this, it’s a big accomplishment.”

The Clippers (5-3) ran roughshod on both sides of the ball. Offensively, they racked up 369 yards on 30 snaps. They scored three touchdowns on four offensive snaps in the third quarter and five second-half TDs on nine snaps.

Stevenson picked his spots as Chester struck the ideal offensive balance, pounding the ball on the ground to set up passing opportunities. The junior quarterback dropped back just eight times, but he completed six of them for 119 yards, the only blemish a first-quarter interception that was tipped at the line of scrimmage.

Stevenson hit Malik Langley perfectly in stride in the end zone on the first play of the second quarter for a 36-yard score. Later in the quarter, his crossing pattern aimed at Langley was deflected, but the senior speedster still came up with the ball in the end zone, making it 30-0 Chester.

Anton Sterling again from the 9. Chester up 12-0. First quarter. pic.twitter.com/hDkCBsuy4c

Chester threw on its first three snaps of the second half. First, Stevenson lofted a deep fade to Langley for a 20-yard TD, then after a nine-yard hookup with Will Smith, he found Malachi Langley on a comeback route where the receiver broke one tackle and high-stepped 31 yards to pay dirt.

“They’ve been helping me all season,” Stevenson said of the Langley twins, who accounted for five catches for 110 yards. “I just want to get the ball to them and the rest of my playmakers, and then we just go from there.”

Stevenson had much comfort to operate thanks to another dominant defensive performance by the Clippers. Though they didn’t cause a turnover, they frustrated Coolidge all day. It was nowhere more evident than in the running game, where Coolidge tallied minus-67 yards. That figure isn’t embellished by one or two disastrous plays in the kicking game or egregiously negative fumble plays: Only seven of Coolidge’s 26 running plays went for positive yardage.

There just was no room for the Colts to kick into anything. Defensive ends Darron Miller and Cy’heem Brown were upfield all game, the initial pursuit opening lanes for bruising linebackers like Muhammad, Jakai Boegerty and Devin Bobo to clean up and finish plays for the Clippers.

The stinginess on the ground forced Coolidge (3-4) to take to the air 30 times. Quarterback Dizhaun Hancock hit on a 44-yard connection with Kevin Holts that led to an eight-yard touchdown to Tiyahn Pelham (six catches, 37 yards) with 28 seconds left in the first half. But Hancock (11-for-27, 98 yards) was sacked five times, too.

As the negative plays piled up, it was like chum in the water for a swarming Chester defense that was happy to be back at home, before a couple of thousand fans in a block-party atmosphere that is Chester homecoming.

A fourth down sack by Darron Miller ends a promising Coolidge drive pic.twitter.com/1lCQGGu9Oi

Few felt that as acutely as Stevenson. With the pinching sensation in his back last Friday, he tried not to assume the worst. He worked hard this week to return.

“I tried not to fear the worst,” he said, “because we still had three weeks left and have a chance to make the playoffs.”

Academy Park’s Johnson lets his play do the talking in win over Chichester
Mercury Roundup Oct. 12