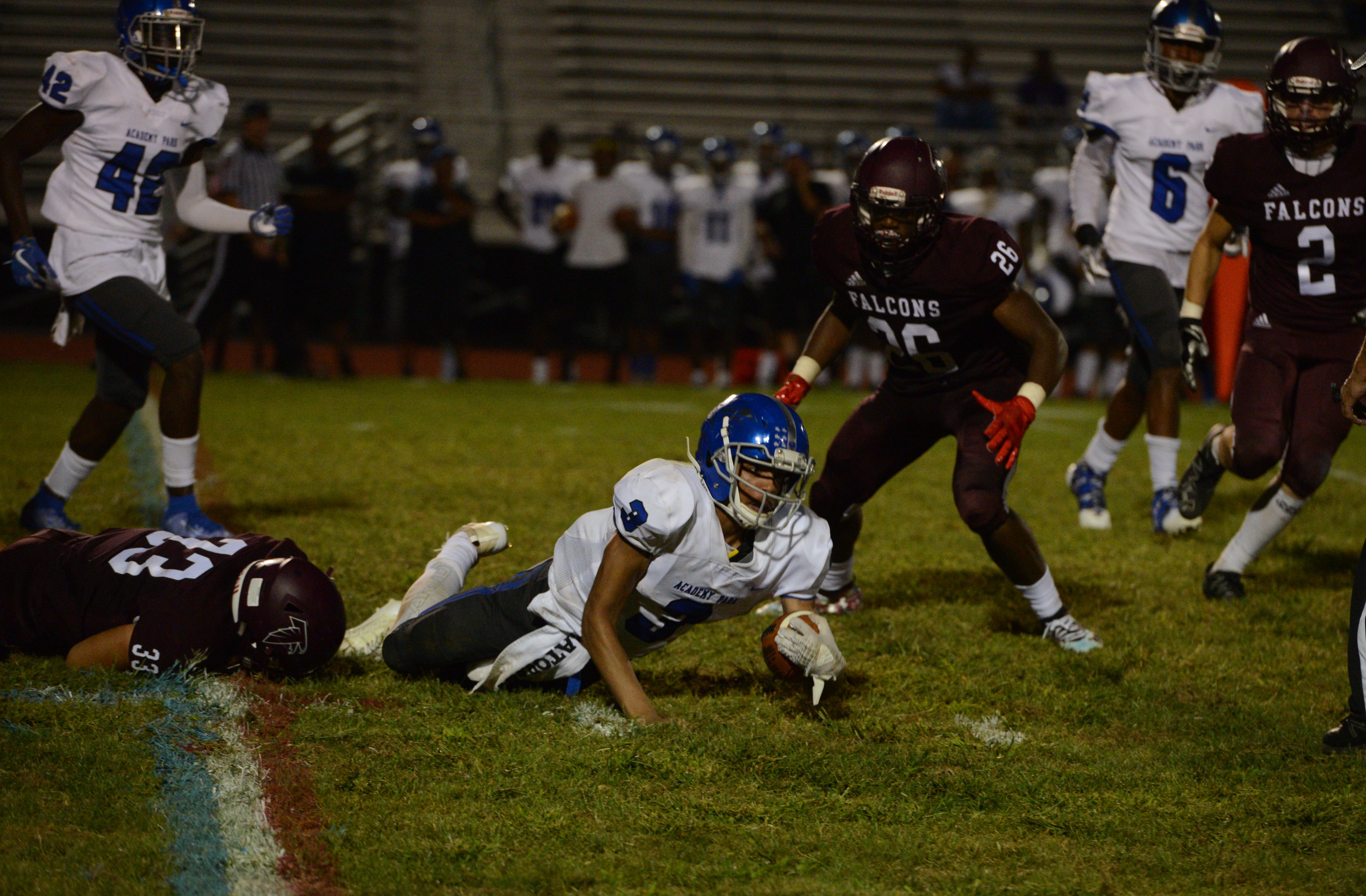 Academy Park QB Barry Brown is taken down after gaining yards on a keeper against Pottsgrove. (Owen McCue - MediaNews Group)

UPPER CHICHESTER – Malik Johnson has been an underrated player for Academy Park this year.

While he has flown under the radar, the speedy senior wide receiver/defensive back is an impact performer on both sides of the ball. He showed that Saturday, playing a key role in spoiling Chichester’s homecoming.

Johnson made a pair of interceptions, including a pick-six, and caught a 17-yard pass for a touchdown in the first half of Academy Park’s 48-20 victory.

And then he did something he had never done before …

“Man, this is the first time I’ve been interviewed,” he said. “Kind of nervous…”

Johnson collected his thoughts but wouldn’t talk too much about himself.

“It’s a team effort, ” he said. “We did what we had to do today. Our goal is to win the Del Val League and go further (in the District 1 playoffs). I think we’re doing pretty good so far.”

Senior quarterback Barry Brown was 8-for-12 for 92 yards and a touchdown to Johnson, who finished with a pair of catches for 26 yards.

“I’m usually a defensive guy, so when I do score a touchdown, I guess I surprise everybody,” Johnson said. He capped an impressive first half by streaking across the end zone and hauling in a 17-yard pass by Brown. The Knights, who can clinch the Del Val title next week at Chester, led 34-13 at the break.

“We just treat every game like it’s a playoff game,” Johnson said.

Barry Brown to Malik Johnson, 17 yards for the touchdown…

Brown, who entered the weekend as the highest-rated passer in Delco (168.15 QBR), added 139 yards rushing on 14 carries with touchdown runs of 38 and 40 yards. For the season, he has thrown for 832 yards and has 798 yards on the ground. Not many QBs in Delco history have enjoyed 1,000-yard passing and rushing campaigns, but Brown is well on his way to accomplishing the feat.

“I wanted to get another 200-yard passing game, but I did have a big game rushing,” he said. “I’m just happy we got the win.”

Johnson and the AP defense forced five turnovers. Decenzi was 8-for-19 for 122 yards, two TDs and three interceptions.

“I know (Decenzi) personally and he’s actually a really good quarterback,” Johnson said. “They had some plays where they burst out and got some big yards, but other than that I thought we shut them down.”

AP coach Jason Vosheski considers Johnson a bit of a late-bloomer. He started to see a positive change in Johnson’s game about a month into the season.

“I think he has about five interceptions in the last three weeks. He’s been all over the place,” Vosheski said. “The light bulb went on around Game 3 of the season. It was, ‘Oh wait, I’m a senior and I can do all of this’ and the game just came easy to him. He’s taken that next step, which is fun to watch.”

On AP’s first possession, Brown sprinted 38 yards to the end zone. A block by wide receiver Alphonso Hayes enabled Brown to score untouched. Johnson’s first interception was returned 35 yards to pay dirt to give the Knights the lead for good with 3:45 left in the first quarter.

Hayes (three catches, 48 yards), Eric Willis and Glister Threadgill III all chipped in with TD runs for the Knights, who amassed 276 yards rushing on 38 carries.

For Chi (305, 1-1), Marquis Fields had a long TD run and Decenzi hooked up with Cortez Bowens for a 42-yard scoring pass.

Folk gets foot down, Episcopal takes a big step to 6-0
Stevenson back healthy, so is Chester’s defense