Folk gets foot down, Episcopal takes a big step to 6-0 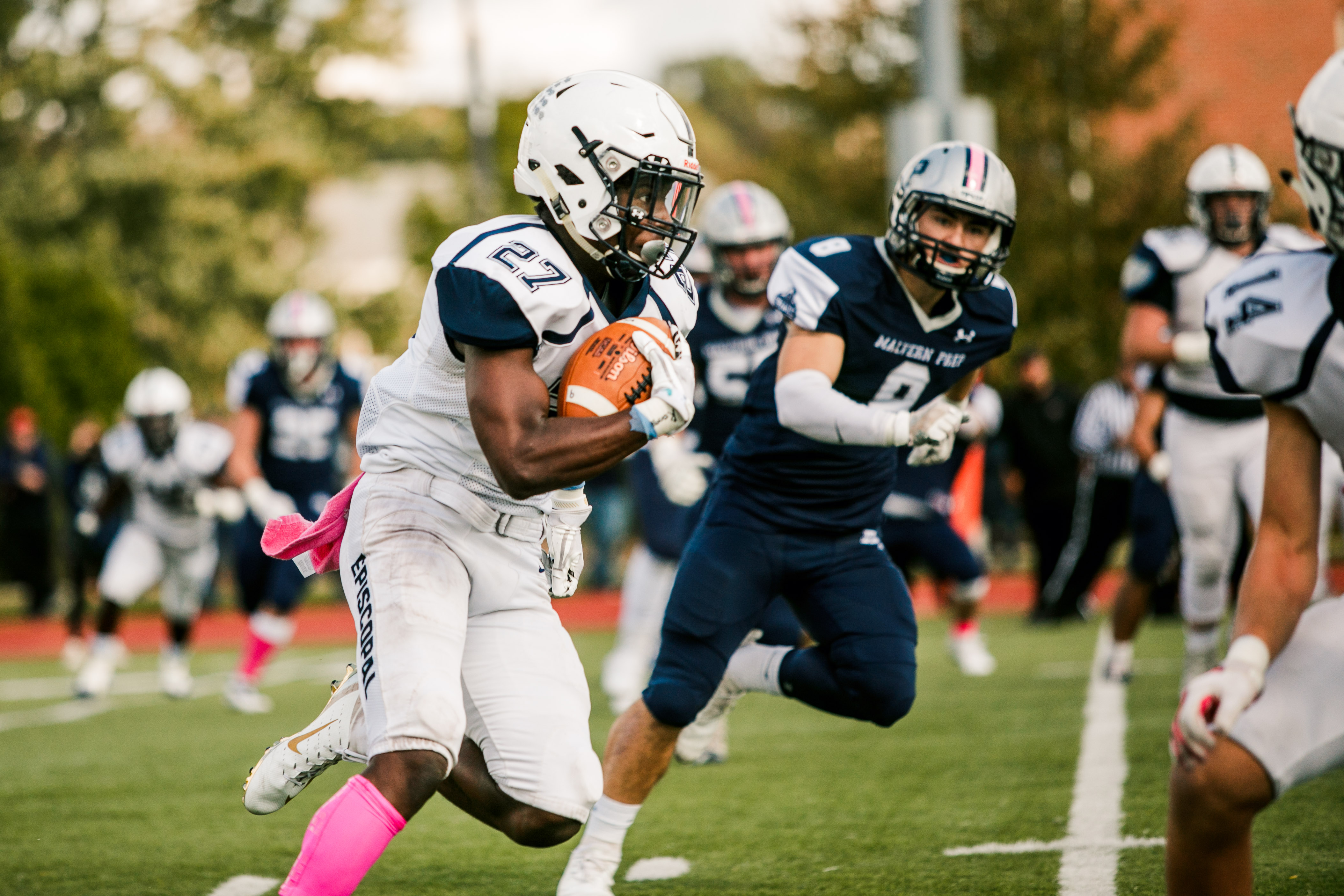 PHILADELPHIA — Malcolm Folk still could not process what he had done and what had transpired in the hectic final moments Saturday.

He knew he caught the game’s winning touchdown with 32 seconds left. He knew his defense held on three shots at the end zone. But still, even after the celebration, it all seemed a blur.

“He put it up there and I just made a play,” Folk, the Episcopal Academy wide receiver said of quarterback Maurcus McDaniel. “I give all the credit to him, the man upstairs. It’s crazy. It’s still unreal to me.”

Episcopal Academy beat Penn Charter 21-17 in an absolute thriller in the teams’ Inter-Ac League opener. The Churchmen, now 6-0 overall, grabbed the lead on McDaniel’s 14-yard scoring pass to Folk in the game’s waning seconds. The Quakers (5-1) connected on a 51-yard pass to get to EA’s 17-yard line with 14 seconds remaining.

This is the winner for EA, which didn’t send when I tried to. Marcus McDaniel to Malcolm Folk from 14 yards. Spectacular catch. What a win for EA. pic.twitter.com/xEtwZmoAhA

“I’m just happy for everybody,” said McDaniel, who rushed for 143 yards and passed for 115. “We were working for this all week, and we knew that it was going to come down to a one-possession game at the end of the game. I was just glad for my guys and I was really happy that everyone could enjoy this moment.”

It took some work getting there. EA was down 10 points early in the fourth quarter. It had the ball at the Penn Charter 3-yard line. Four consecutive runs were stuffed. The game looked bleak. But the defense held, got the offense great field position, and McDaniel’s five-yard burst made it a one-score game with nearly six minutes remaining on the clock.

Penn Charter 17, Episcopal Academy 14. 542 4q. Marcus McDaniel with a 5-yard TD run. EA got a stop and game right back down. Hang on Ala, we’re comin in for a landing #Delcofootball pic.twitter.com/g0CXEt6AwA

Philosophically, that’s what coach Todd Fairlie was trying to do. He did not want to play for the tie; Penn Charter had been cramping all second half. The Churchmen got to the 14, surviving a play without McDaniel (“a stinger,” he said) along the way, and called time out.

Then they won the game.

Fairlie appropriately summed it up: “Those two just made incredible plays.”

EA had run the play earlier in the contest, but it didn’t quite work. It was all about getting a mismatch for another try.

Folk, in motion, ran a go route from the slot. McDaniel put it up for him in the back of the end zone. He jumped, got a foot down. There was a beat. The referee signaled touchdown. Bedlam in East Falls.

The play call was one thing, the connection between these two is another. McDaniel knew where he was going in that spot.

“Malcolm told me, if No. 7 (Penn Charter’s Aaron Maione) is on him, just give him a chance, he’s going to make it,” McDaniel said. “So that’s what I did.”

McDaniel didn’t see the catch, but he didn’t need to. The crowd told him what happened. Folk looked at the big picture. The win was great. Beating these Quakers means something. It’s a task EA has not done of late. Now that they have, the Churchmen can sense something brewing.

“We haven’t beaten Penn Charter in a while, so for us to beat Penn Charter today it’s like a big weight off our shoulders right now,” Folk said. “It’s definitely a big confidence boost for us going into the rest of the week.”

McDaniel’s five-yard run on the final play of the first quarter had put the Churchmen on the board. Penn Charter answered on Jones’ three-yard spurt and Ryan Bradby’s 43-yard field goal in the second quarter. Chandler Turner, spelling the injured and dynamic Matt Marshall, raced 32 yards to the house to open the third quarter.

Unbelievable catch by freshman TJ Lamb for a 32 yard first down! #SCTop10 pic.twitter.com/Pmuw7KGO7f

That done, Fairlie was quick to note that this league win is just one win. Another undefeated team, Springside Chestnut Hill, awaits them.

“The way we run it, every game’s like a playoff,” Fairlie explained. “We have a great game next week. And, you know, you’ve got to play good football every week. We have a great, loving group of kids that love each other, care for each other. It’s been fun. We’re not looking toward the last game of the year because we have a long way to go.”

Given a chance, Garrett shines at Central League cross country hampionships
Academy Park’s Johnson lets his play do the talking in win over Chichester