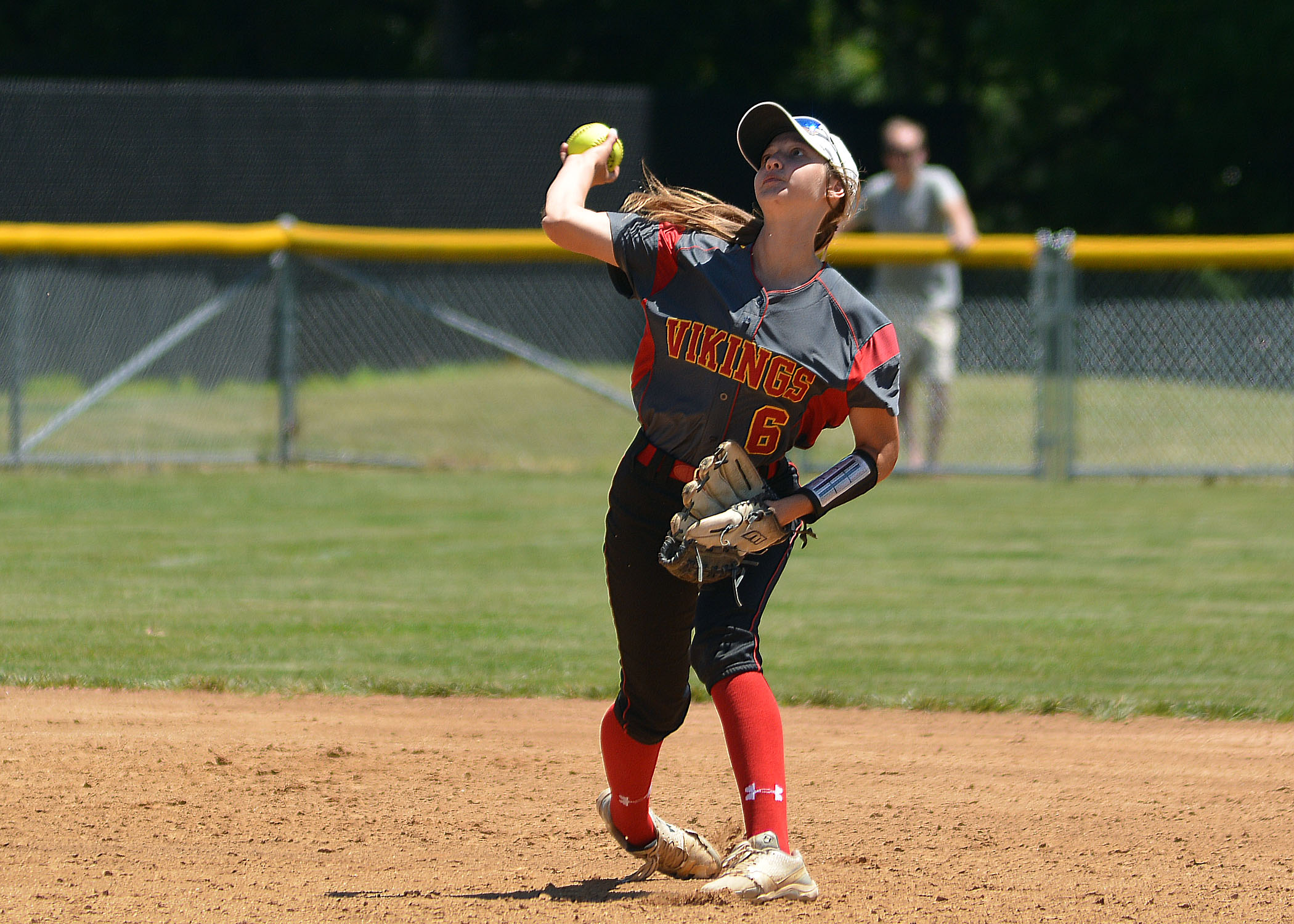 WEST GROVE >> It was, according to the Vikings’ head coach Bobby Swier, the greatest softball season in West Chester East’s 45-year existence.

And who could argue? The 2019 campaign included 24 victories, and featured a District 1 5A crown. But on Tuesday, in the biggest outing in program history, the Vikings were not whole.

“You want everybody to be here, but we are going to roll with who’s here,” Swier said as his team took an 18-game win streak into the PIAA’s 5A Final Four.

What was, undoubtedly, a great postseason run came to a halt at Avon Grove, as Lampeter-Strasburg advanced to the state final with a 5-2 semifinal triumph. But a cloud was hanging over the entire experience. West Chester East Athletics later tweeted: “Great season ladies, thanks for the journey. Proud of you all for battling (Tuesday) under the circumstances.”

Here are the circumstances: the Vikings were without two very important starters, and it had nothing to do with injuries, illness or family emergency. That used to comprise the list of acceptable reasons for missing a game, but we live in different times, apparently.

Let’s be clear: nobody in the East camp was using the absence of senior co-captains Kinzie Thompson and Kelsey McLaughlin as an excuse for the setback, which was the Vikings’ first since mid-April. And it is also true that we will never know if having its full lineup on the field would have made a difference for the Vikings on Tuesday.

But I think we can all agree that it certainly didn’t help to lose a first team All-Ches-Mont selection like Thompson, or an all-league honorable mention pick like McLaughlin.

With Thompson and McLaughlin, East was mowing down opponents in the postseason, winning the first half dozen playoff outings by a combined score of 41-3. The Vikings were on the kind of roll it takes to eventually play for a state title – but then Tuesday happened.

“At the end of the day, people make choices,” Swier said. “I have full confidence in the girls that are here. We are going to play with who is here.

“We’ve had some adversity this season with injuries and such, but they’ve continued to pick each other up and move on.”

To his credit, Swier was reluctant to talk much about not having the top two batters in his everyday lineup for a do-or-die contest with a berth in the state championship game on the line. But you can easily read between the lines.

According to reports which were confirmed by Cornelius, Thompson and McLaughlin were not in uniform because they opted instead to go to the shore for Senior Week. Swier was notified of the decision not long after W.C. East pummeled Pittston 9-0 last Thursday in the quarterfinal round, and had almost six days to prepare.

But this was a blow that is very difficult to strategize around.

“We made the changes we needed to, and I think we did pretty well for not having our full starting nine,” added senior catcher Sam Gomez.

“We haven’t had much time to prepare, but the energy we have, I think it helped take us this far and that got us through a lot of struggles.”

In addition to being without its No. 1 and 2 hitters, East had to find replacements in the field. One of the better fielding shortstops in the area, McLaughlin’s fill-in was senior Lexi Wilson, a utility infielder. And senior pitcher Olivia Ronayne filled in for Thompson in left field.

Ronayne later admitted that even though she’s played in the outfield in travel softball, she had never before played the position in high school.

“This has been tough,” Swier said. “The seniors that were still here playing, they said, ‘hey, we are going to go and continue to do what we do.’ Nobody blinked an eye. We were ready to move on.”

But not having two key cogs – let alone senior leaders – was a blow to more than just the Vikings’ lineup. It was a mental hurdle which certainly seemed to challenge East’s momentum — its mojo.

“Being down two players, we were all still worked together and kept playing our game,” Ronayne said, with tears rolling down her cheek.

“We tried to improvise and put together what we could, but it was hard,” added Gomez, who had just played high school softball with her younger sisters, Jess and Amanda for the final time.

This is a cautionary tale about commitment, or the lack thereof. Years ago, this type of problem was exceedingly rare, and virtually unheard of in the playoffs. While it is true that the vast majority of competitors these days are fully committed to their teammates, it sure looks like a virtue that has been eroding over time.

“The times have changed from where it used to be,” Cornelius confirmed. “From my experience, this is becoming more and more of an issue.”

Ask any AD, and they’ve probably experienced or heard of a time when a student-athlete had to be dragged at the last minute to a game by a parent or parents, who understand and value the commitment their child has made to the rest of the team. That didn’t happen in this case.

“We have no district-wide policy on this,” Cornelius said. “I don’t know of anybody who does. You just have to go with whoever shows up.

“You always worry about seniors, but particularly in the spring season. When school is ending, there are a lot of distractions.”

Swier agreed: “There are tons of things going on with graduation, parties, prom. That’s the special thing about playing this sport. You have to be committed to what we are doing.

“We had girls here that were ready to roll.”

The fill-ins played very hard and very well for Swier. Junior Paige Olson replaced Thompson and belted a home run on Thursday. Amanda Gomez collected a triple in the first inning batting in the second spot. And Wilson and Royayne were solid in the field.

“Every single girl on this team has played and got varsity reps over the course of the season,” Swier said. “We have a lot of confidence with any player that we were to put in.”

But there was a sense that something was missing on Tuesday. That the West Chester East squad that roared into the postseason was not the same team that bowed out, even though the squad made a valiant comeback bid.

When asked about their thoughts on the issue of commitment, Sam Gomez and Olivia Ronayne didn’t mince words.

“When you are on a team, it’s a commitment. I think when you join a team you should to play,” Ronayne said.

“I always want to put in 100 percent because I want to be there for my sisters and my teammates,” Gomez added.

“Some of these seniors, we’ve been playing together since we were very young. It was cool to grow up with them and be able to share these last moments on the field with them.”

Unfortunately, not all of the seniors bothered to show up.

Like 2017, Hazleton stands in way of Spring-Ford’s pursuit of state final
Road ends in semis for West Chester East