Like 2017, Hazleton stands in way of Spring-Ford’s pursuit of state final 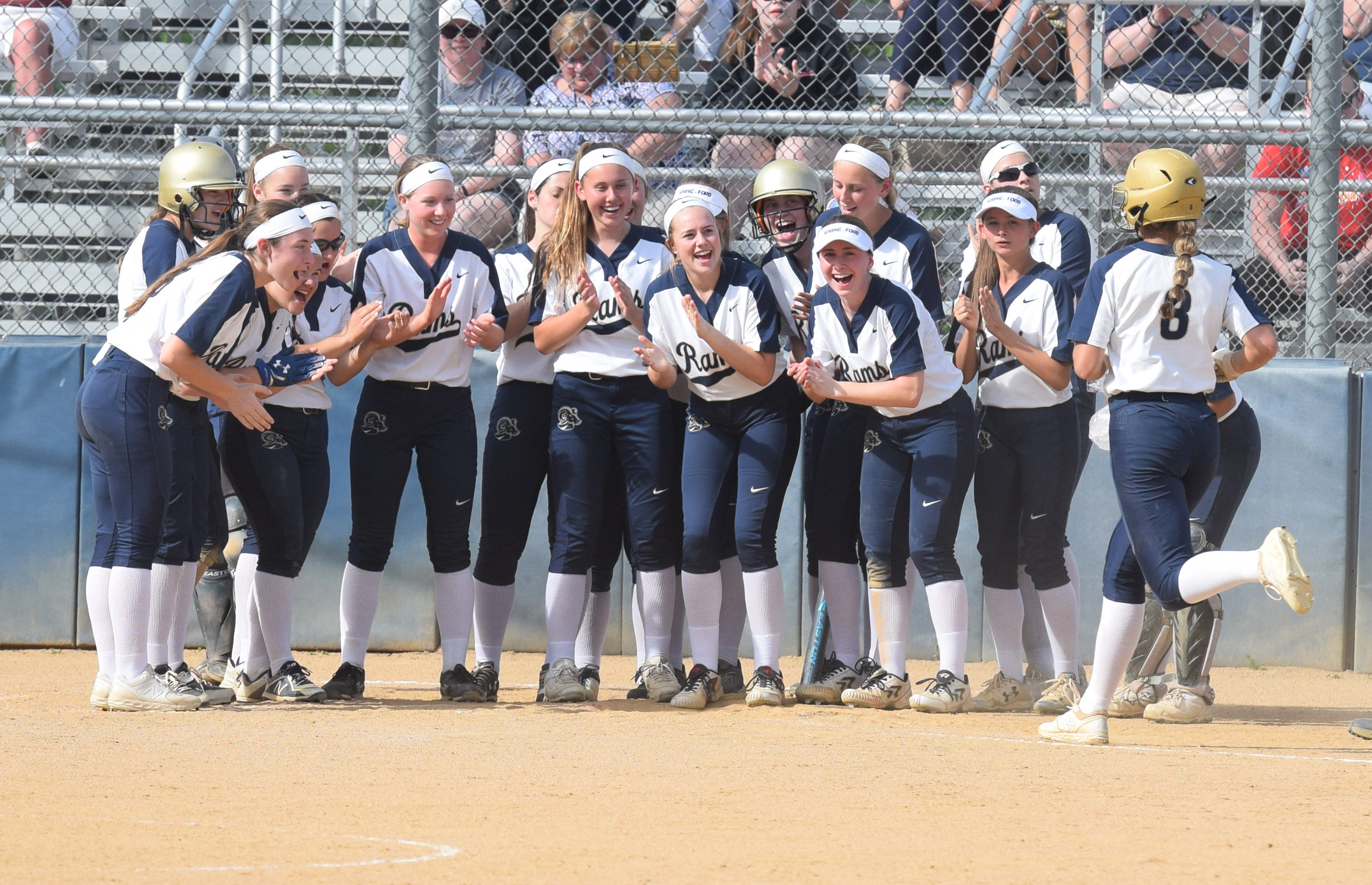 It was two years ago, but the way Ashley Della Guardia tells it, it sounds like it was yesterday.

The Spring-Ford junior first baseman’s memory is still fresh of the last time the Rams faced Hazleton, a 2017 PIAA Class 6A semifinal at Parkland High School.

“It sticks with me. We had that game,” Della Guardia said.

The Rams led 4-0 after two innings but it was wiped away by a five-run second inning for Hazleton, ultimately an 8-5 Cougars win that sent them to Penn State and sent Spring-Ford back to Royersford empty-handed.

Spring-Ford will do all it can to avoid a similar fate when the two programs run it back in the PIAA 6A semifinals on Tuesday, 5 p.m. at Patriots Park in Allentown (postponed from Monday).

“I just think this time around we owe it to them. We’re going to give them our best and hopefully we get their best, too,” Della Guardia said. Spring-Ford’s Ashley Della Guardia, right, gets a high-five from Noelle Reid after scoring a run against St. Hubert during a PIAA 6A first round game at Arcadia University. (Austin Hertzog – MediaNews Group)

Both teams’ best shots have been quite good this spring: Spring-Ford is 26-1 after Thursday’s 4-1 quarterfinal victory over District 11 powerhouse Parkland; Hazleton is 22-1 after the Cougars took out a pair of District 1 programs in the first two rounds, Pennsbury 2-1 in the first round and district champion Downingtown West – the lone team to top Spring-Ford this season – in the quarterfinals, 1-0 in eight innings on a walkoff home run from Julia Mrochko.

For the Spring-Ford upperclassmen who played in the state semifinal two years ago – seniors Jules Hughes, Maddy Little, Julia Heine, Bridget Sharkey and juniors Della Guardia and Maddie Cortino – the defeat only made them want to return to the final week of the year even more. History >> Hazleton is the premier large-school program in District 2/4 and has qualified for states seven straight seasons. This is the Cougars’ third trip to the state semifinals in four seasons, their best run coming in 2017 when it rallied past Spring-Ford and reached the final, where Hazleton fell to three-time reigning champion Hempfield Area, 5-3. (The champions out of District 7 are still in pursuit of their fourth straight title in the other semifinal, Hempfield Area vs. District 3 winner Central Dauphin, at St. Francis University.) Hazleton has been a thorn for another Pioneer Athletic Conference program as well: the Cougars ended Perkiomen Valley’s 2016 season in the PIAA quarterfinals.

Hazleton at a glance >> The Cougars have three carryovers from the 2017 meeting in the junior trio of shortstop Marissa Trivelpiece (Michigan State commit), third baseman Tiana Treon and left fielder Kyra Antolick. Despite not having any impact seniors, Hazleton has also been led by a group of sophomores: second baseman Mrochko, catcher Julia Mooney, center fielder Olivia Wolk and designated player Gianna Gombeda.

Junior Aleah Kost handles pitching duties. After sharing the job with sophomore Caitlyn Katchur in the regular season, Kost has emerged as the Cougars’ No. 1 and responded in the state playoffs with a two-hitter against Pennsbury and three-hit shutout of Downingtown West. Kost’s strengths are based on her location and variety versus being a power pitcher.

Bob Bertoni is in his first year as Hazleton head coach.

Spring-Ford at a glance >> The Rams have twice as many carryovers from the 2017 semifinal with seniors Hughes, centerfielder Little, second baseman/catcher Heine and left fielder Sharkey and juniors Della Guardia and catcher Cortino.

Spring-Ford seniors have done a good job in the team finding the perfect balance between business and pleasure.

“We’re not only in it to play, but also for the experience and to have fun,” Hughes said. “You have to remind everyone that every once in a while, we’re here not only because we’re good, but because of how well we work as a team and mesh so well with one another.” Peck, who was named Pa. Gatorade Player of the Year on May 30, has been a supernova for Spring-Ford. Pitching, she is 16-1 with a 0.797 ERA, 160 strikeouts against 24 walks with multiple no-hitters, including one against Pioneer Athletic Conference runner-up Methacton and a perfect game against Garnet Valley in the District 1 quarterfinals. Batting, she has a team-high .474 average, 12 home runs and 35 RBI.

Not only is Peck the leader in on-field excellence, she’s a leader in keeping things light.

“Bri always has that side of her, that if somebody’s down about something, she’ll say something funny and they’ll forget about it, or she’ll do something and we’ll all laugh at her. She always lightens everybody’s mood,” Della Guardia said.

Freshman Jules Scogna, who owns a 0.186 ERA over 37.2 innings, provides another option in the circle for head coach Tim Hughes after the rookie threw a no-hitter against District 12 winner St. Hubert in the PIAA first round, a 10-0 win in five innings.

Matchup >> Potentially overlooked amid Hazleton’s pedigree is the tightrope it’s walked in the first two rounds with low-scoring, one-run wins over Pennsbury (2-1) and Downingtown West (1-0). Having only scored three runs in states so far, that’s an unideal way to enter a matchup with the flame-throwing Peck and the Rams.

While the Rams have put up 14 runs in states to date, 10 came against a sub-standard St. Hubert team and the other four came in a single inning against Parkland. And the pitching style of Hazleton’s Kost, one predicated on movement and variety, is not preferred by the fastball-favoring Rams.

Added up, it’s hard to envision a repeat of a 13-run outpouring like their state semifinal two years ago … more like numbers 1 and 3 added up rather than side-by-side.

Prediction >> Spring-Ford got what might have been a season-defining victory a round ago in defeating Parkland with timely hitting, great pitching and flawless defense. That doesn’t mean it was the final win though: the Rams have the goods to earn a trip to Penn State and will figure out how to get to Hazleton and Kost when it counts … Spring-Ford 3, Hazleton 1. Notes >> The PIAA 6A final is scheduled for 4 p.m., Thursday, at Penn State’s Nittany Lion Softball Park … Hazleton played its previous round game at Tuesday’s site, Patriots Park in Allentown, and played there in the quarterfinals three of the past four seasons. Spring-Ford, meanwhile, hasn’t played at the venue since a 2014 first-round loss to Parkland.