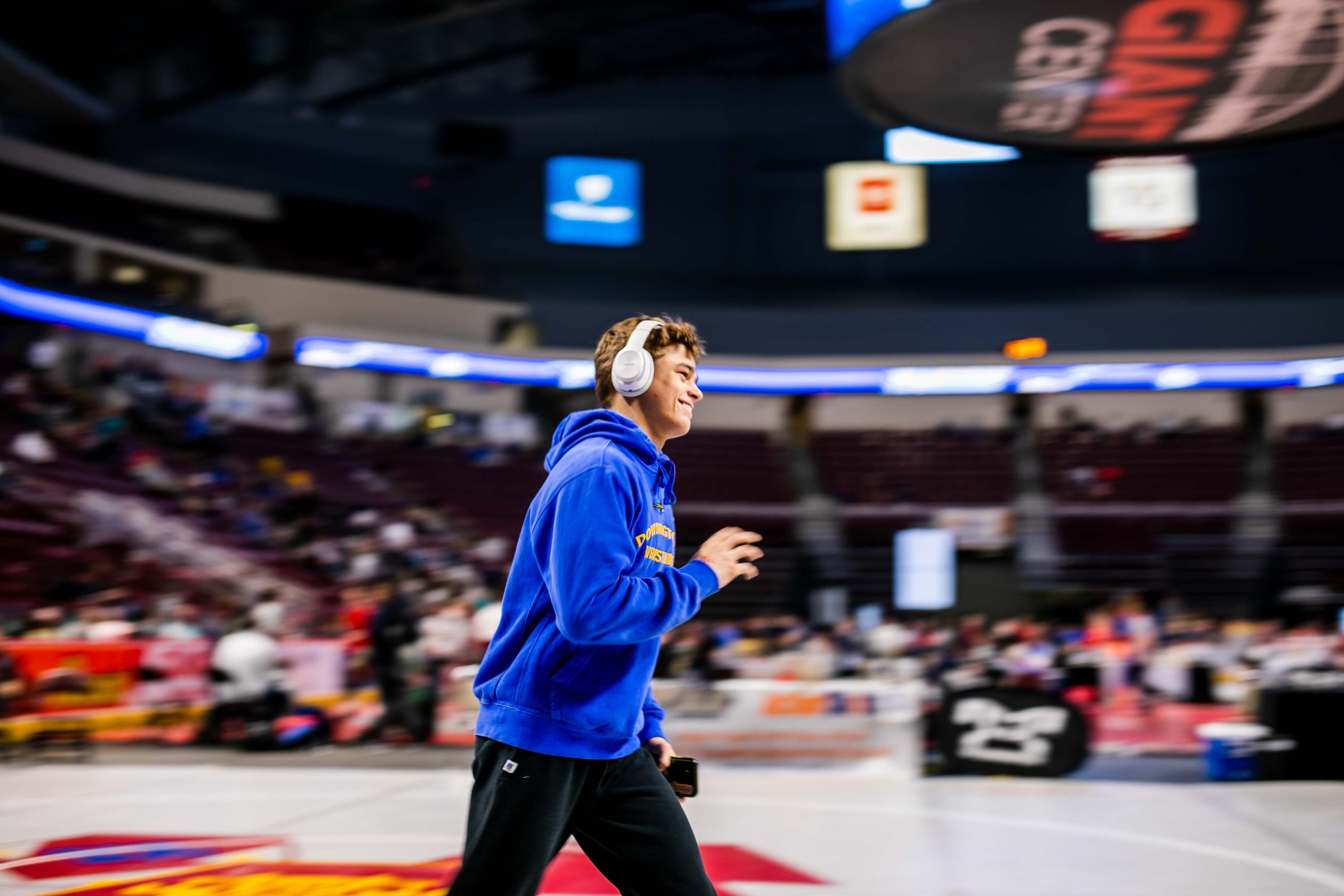 HERSHEY >> As the final days of Dom Findora’s high school wrestling career dwindle, the stakes increase with every match.

Friday, in the quarterfinals of the Class 3A PIAA Championships, Findora got sloppy on a shot, gave up a takedown off a scramble and went into the second period trailing, 2-1.

The Downingtown West senior just smiled. Staring up towards the West fan section, Findora cracked a big grin, unswayed by a potential setback.

“This is my last one,” Findora said. “I’m having fun. I knew I was down and that I shouldn’t have been. I felt like my warmup was quickened and I was a little nervous, but I was smiling because I’m just here to have some fun.”

He was the only one from the 11 area wrestlers still alive entering Friday to leave smiling. Findora (138 pounds) did overcome the early hiccup, and he is the only medalist from the Ches-Mont this winter, marking a low for the league that hasn’t been seen since 2007.

Findora became the third wrestler from West to earn multiple state medals, and he will wrestle in the semifinals, which begin at 9 a.m., Saturday, looking to improve on his fourth-place finish as a junior.

“It feels good,” Findora said. “I feel like I won a little ugly. I didn’t want it to be that close. My coach (Brad Breese) just said I didn’t have to be perfect (Friday). (Saturday) is another day.”

After giving up the early takedown, Findora scored the final seven points to win, 7-2. The victory secured a guaranteed top-six finish, but Findora has his mind set on ending his career in the finals.

Hempfield’s Briar Priest, a state champion at 132 pounds last winter, stands in Findora’s way. Both pinned their opening opponents before winning low-scoring decisions in the quarters.

Downingtown West’s Dom Findora gets in on a shot against Abington Heights’ Brian Heard in a 7-2 win in the 138-pound quarterfinals. (Nate Heckenberger – For MediaNews Group)

“I’m going into the match ready for it to be a dogfight,” Findora said. “I’m gonna wrestle hard and have fun.”

Kennett’s John Pardo (215) started his day in quarterfinals, as well, but dropped two straight. Pardo scored the first takedown against Seneca Valley’s Liam Volk-Klos in quarters, but lost 7-4, and again against J. P. McCaskey’s Jose Garcia, before getting cradled up out of a scramble in the blood round.

Kennett’s John Pardo tries to finish a shot against J. P. McCaskey’s Jose Garcia before getting pinned in the 215-pound blood round. (Nate Heckenberger – For MediaNews Group)

No other local even made it as far as the blood round. Regional champs, Carmen Cortese (120) of West Chester Henderson and Oxford’s Cannon Hershey (126) fell in their second matches of the tournament.

Along with Hershey, Henderson’s Billy Wilson (132) and Kennett’s Darrale Barrett (172) saw their careers come to a close.

The Ches-Mont had won 25 medals the previous five seasons, and a drop-off was expected after many of those medalists graduated, but it was by all means a rough year for the league. Next season will also be the first time since 2014 that the league does not return a state medalist.

It was also an expected down year for District 1, and of the 65 District 1 wrestlers to qualify for the 3A tournament, only 16 placed. Faith Christian Academy also added four place-winners in Class 2A.