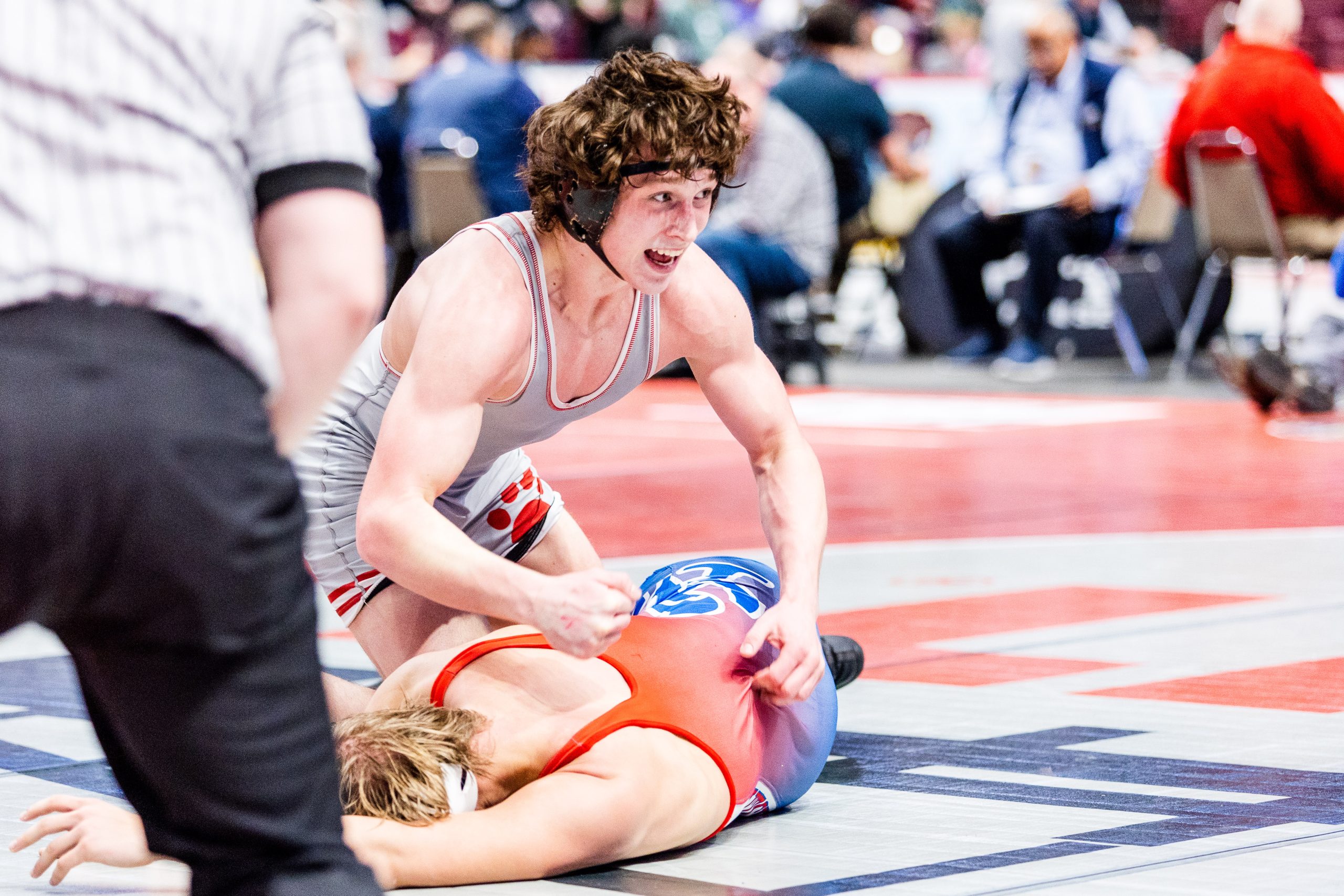 HERSHEY >> They were models of efficiency and performance.

Get out on the mat, get the job done and have the rest of the day to yourself.

That was the mindset of three area wrestlers in the course of the PIAA Championships this weekend. The trio — two of whom hadn’t previously been in the Giant Center as contestants — insured themselves of going home with some level of medal in just two times out on the mat.

Boyertown’s Chance Babb, Daniel Boone’s Tucker Hogan and Owen J. Roberts’ Dillon Bechtold got the most out of their minimal time on the Center floor. They followed opening-round wins Thursday with quarterfinal success; for Babb, a state medalist in 2021, the guarantee is a medal upgrade this year.

Babb, the area’s lone regional champion at South East AAA last weekend, dealt Octorara’s Michael Trainor, the South Central AAA titlist, 7-4. He built a 6-2 lead in the first period that weathered Trainor’s late charge that made it a 6-4 situation before Chance (41-6) executed an escape in the third.

“With a three-point lead,” he said, “I stayed strong. I was in good position to trust my training, feet to back.”

Boyertown’s Chance Babb gestures to the crowd after a 7-4 win over Octorara’s Mike Trainor in the 145-pound quarterfinals. (Nate Heckenberger – For MediaNews Group)

Bechtold 36-7), who wrestled just four times as a freshman, has been wrestling’s version of precocious. Coming to Hershey as the third seed from South East AAA, he prevailed over Bethlehem Catholic’s Luke Thomas with a 5-3 sudden victory Thursday, then went overtime Friday en route to a 10-6 win over St. Mary’s Waylone Wehler.

“I used an inside trip,” he said of the move that took Wehler to his  back in OT. “I felt really aggressive … push, push, take him down.

”I knew I definitely had a chance,” he added. “I worked hard the last couple months, pushing the pace and wearing people down with my good conditioning.”

Hogan (42-1) pulled out a 6-5 win over Canon-McMillan’s Matt Furman. An escape with about 1:12 left in the third quarter proved the difference in a bout where he held a 4-2 lead in the first period before Furman executed an escape to make it a 4-3 score in the second.

A number of other area wrestlers stayed in the medal hunt in wrestlebacks: Daniel Boone’s Dean Houser at 106 and Perkiomen Valley’s Kelly Kakos at 138.

Alan Alexander’s scholastic career came to an end in Friday’s second round of consolations. The Pope John Paul II senior (24-11) closed out his career — it was split between Boyertown and PJP two seasons apiece — with a 91-44 record in matches between 160 and 189 pounds.

Alexander’s senior campaign was highlighted by a gold medal in the PAC Individual Championship and a runner-up showing at the District 1/12 Tournament. He placed sixth at states in 2021.