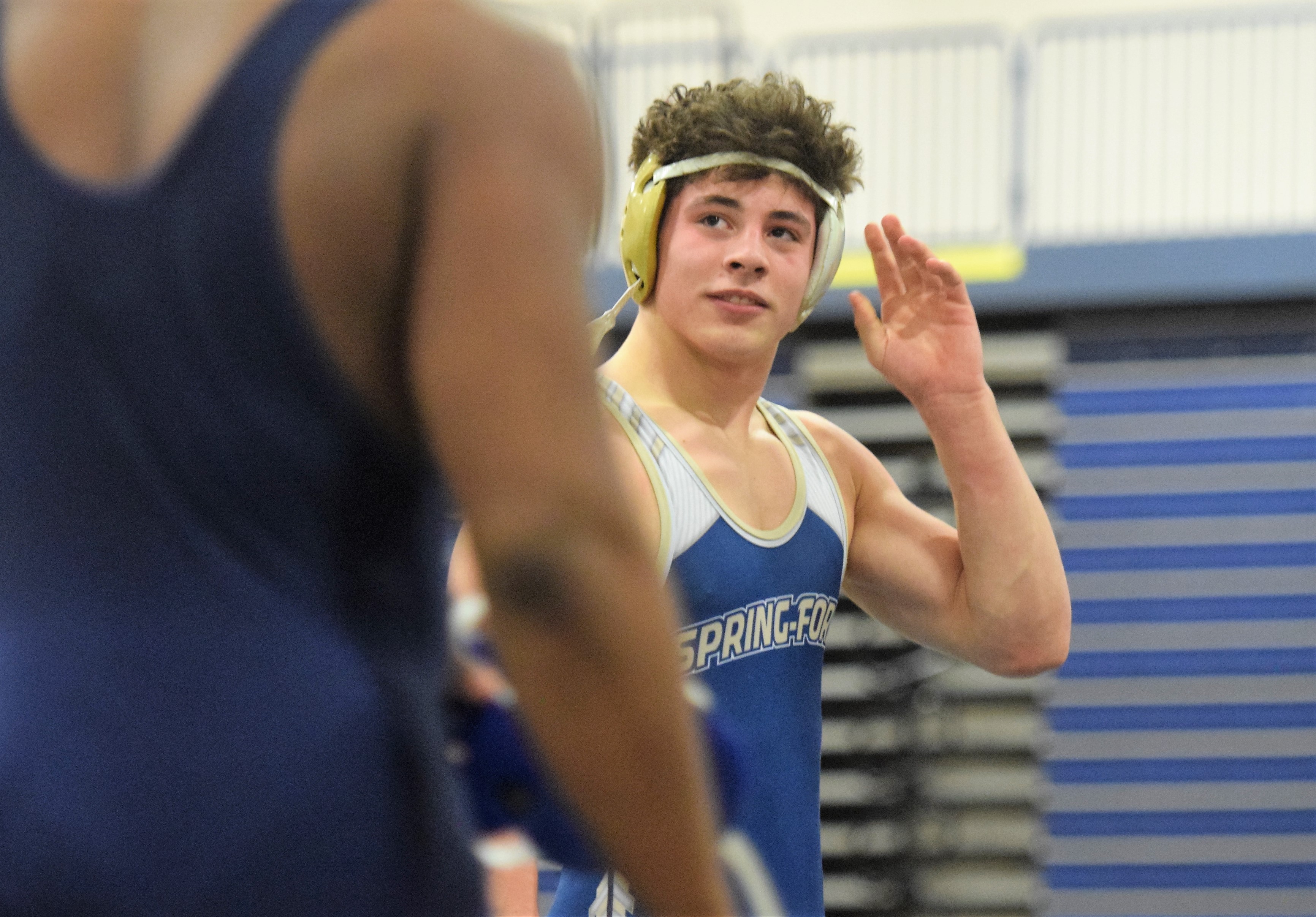 The 2017-18 wrestling season was looking to be a bright one for Joey Milano.

Milano’s scholastic career had gotten off to a fast start. The Spring-Ford freshman, displaying skill and poise beyond his years, had capped a solid regular season by winning the 160-pound weight class at the Pioneer Athletic Conference Championships. Cruising along with a 19-2 record, he appeared on a fast track to additional success further up the post-season ladder.

Then he got derailed from the fast track. Playing some basketball prior to a team practice, Milano went up for the ball, then came down in such a way as to tear his anterior cruciate ligament (ACL) and meniscus. Just like that, his freshman campaign was ended.

“It was hard,” Milano recalled prior to a team practice session Wednesday. “I wish I could have come back early, but over the summer I hurt my knee and tore it worse.”

Two surgeries and a summer off from the sport later, Milano is back going strong. He’ll take a 38-2 record and District 1-AAA North title into the South East AAA Regional being staged this weekend at Souderton.

Milano (38-2) dominated the 182-pound bracket at districts, scoring two first-period pins around a second-period technical fall. He’s part of a precocious Spring-Ford lineup — all but three spots manned by underclassmen — who repeated as District 1-AAA Duals runner-up and was the 1-North team champion.

“I still came in confident,” he said. “The knee feels good.”

At the same time, Milano has a greater appreciation for how abruptly a promising season can be taken away.

“Every year in the post-season, there’s a chance you won’t have another one,” he said. “I’m ready. I want more than just districts.”

“He’s a tough kid,” Spring-Ford head coach Tim Seislove added, “but he’s young. He hasn’t been in this situation before. He realizes it’s going to be quite challenging.”

Like Milano, Sean Brogan is making the most of the current post-season … with one twist: It’s his first appearance.

The Rams’ junior 285-pounder was behind the graduated Matt Lepore last winter. Going 19-18 in the regular season, Brogan found himself in the middle part of the weight class’ upper bracket and facing higher-seeded opponents at practically every turn.

But Brogan proved to be more than equal to the task. He swept past all comers, finishing up with two close decisions against the weight’s two top seeds to become the last of Spring-Ford’s four district champs.

“It’s been interesting,” he said. “During the regular season, I should have gotten a higher seed, winning matches I should have won.

“Wrestling hard and smart, I could have won more. My record was not too good.” Calling on past experience helped Brogan in his semifinal-round match with Pottstown top seed Destyn Snyder. He scored a 3-2 rideout victory to qualify for the 285 title bout with Norristown’s Tijear Brittingham, where he was a 3-1 winner.

“Getting out from the bottom helps a lot … that and holding people down,” Brogan said. “In the semifinal match, I knew I had the (coin) toss. So if it came down to it, all I had to do was get up.”

“He’s figured things out this year,” Seislove said. “He’s excited to be in the post-season, but he realizes it will be a challenge.”

“We’ve got a good mix of kids, and senior leadership from guys like Dirk,” Seislove said. “Tobin’s much improved as a junior.”

Regional action kicks off 5:30 p.m. Friday with two championship rounds. The Saturday schedule starts at 9:30 a.m. with the first of four consolation rounds, and 11 a.m. semifinals, leading to 6 p.m. medal round.

The top five placers in each weight class qualify for the PIAA Class AAA Tournament March 7-9 at the Giant Center in Hershey.

The PAC will be out in force at Souderton, with 45 wrestlers qualifying by virtue of Top Four places at 1-North.

The conference boasts 11 district champions, and one returning champ: Owen J. Roberts senior Daniel Mancini, who will be back defending his 152-pound title.

Mancini (29-2) is one of the Wildcats’ four district champs, joined by David Forrest (113), Cole Meredith (145) and Connor Quinn (160). That total matched Spring-Ford for most district gold mined last weekend. South East AA Regional >> A trio of Pope John Paul II wrestlers will be looking to make the next big step this weekend.

The three Golden Panthers — Ryan Vulakh, Matt Vulakh, Jack Files — are pursuing high medal finishes at Wilson-West Lawn, and qualifying for the PIAA Class AA Tournament at Hershey. The Vulakh brothers are looking to make return trips to the Giant Center, where they medalled in Class AAA competition last winter, while Files is shooting for a first-time visit to Hershey.

Ryan, in addition to maintaining his unbeaten (27-0) record and solid run through 2018-19 regular season, is in position to join the area’s career-win fraternity. The senior 152-pounder goes to West Lawn with 99 victories, looking to become the first wrestler under the PJP banner to reach triple digits. Matt (20-7) is working toward a higher step on the medal podium. The sophomore 106-pounder was eighth at 106 last winter; like his brother, he was a champion in last weekend’s District 1/12 AA Tournament.

Files (19-8) claimed district silver at 195. The senior missed qualifying for Hershey in 2018, coming up one win short in the South East AAA Regional at Oxford.

The top six placers in each weight class qualify for states.