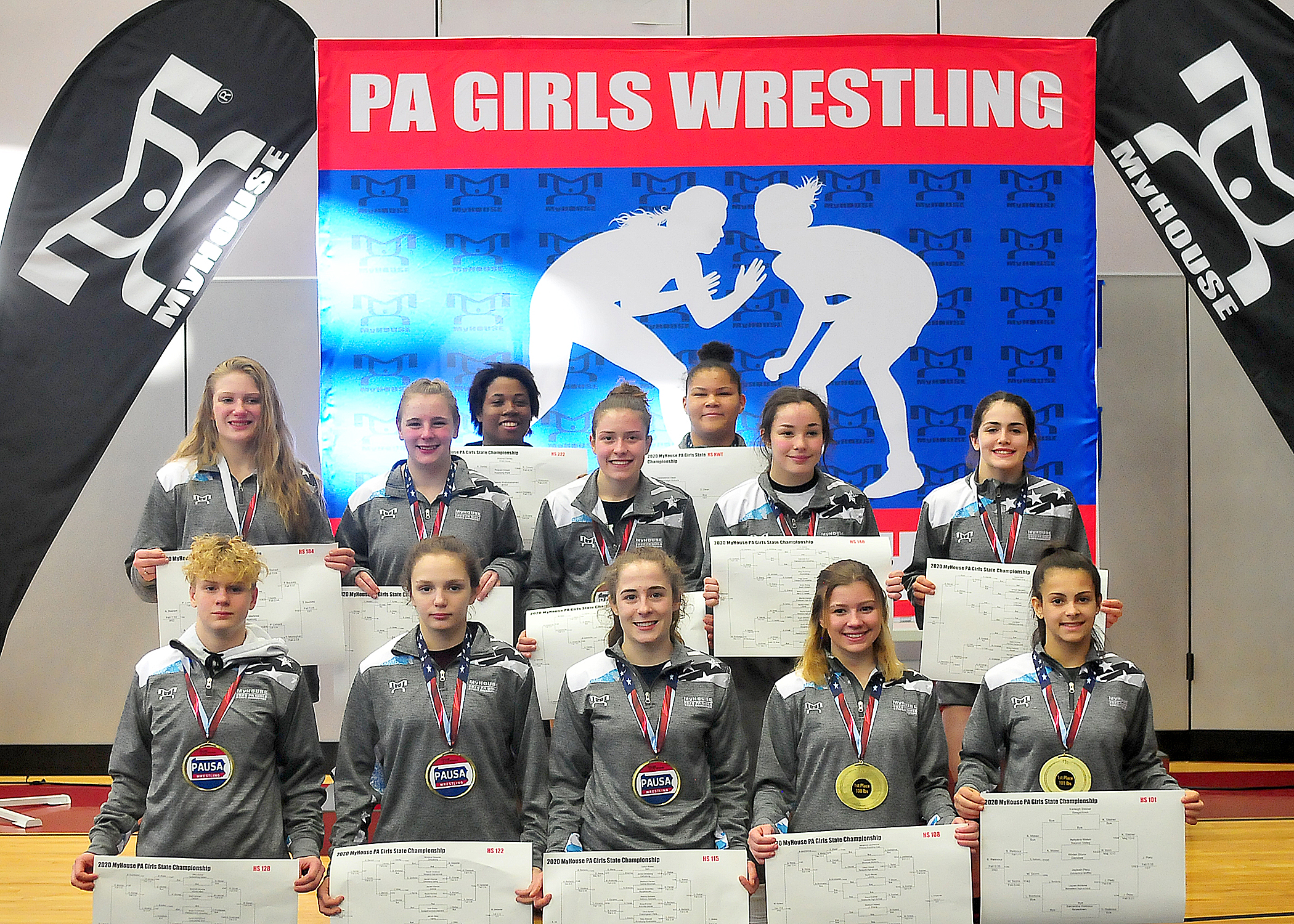 GETTYSBURG—Back in 2014, PAUSAW (then PAWF) ran its first-ever Pennsylvania girls folkstyle wrestling tournament at Susquehanna Twp. High School. A few dozen girls showed up, and had a great time. Then vs Now: At top is the first edition of the PA Girls Folkstyle Wrestling Championships in 2014, below is from this past weekend at Gettysburg (Photo courtesy PA Women’s Wrestling)

It has grown since then, to say the least. At this year’s event this past Sunday at Gettysburg High School, the number of girls participating approached 400, including 124 in just the high school division. The combined PA High School/Northeast Girls folkstyle wrestling championships has picked up sponsorships, including a title sponsor in MyHouse Sportswear.

“I actually think we may have grown out of this location,” said PAUSAW Chairman Joe Stabilito. “I think it was a success overall—thanks to the help of a great support staff, and the folks at Gettysburg have been wonderful. But I think we simply need a little more space to run more efficiently and get done a little bit more quickly.”

The notion that the event has expanded so much in just seven years time that it has outgrown two different venues bolsters the idea that it is past time for the PIAA to sanction girls wrestling in high school. There is a big push for exactly that by Pennsylvania Women’s Wrestling and #sanctionPA.

Nationwide, girls wrestling is the fastest growing sport, with over 21,000 girls participating in the 21 states to have already officially-sanctioned girls wrestling. The proposal in Pennsylvania is for, first, a state championship event, then a girls season to run parallel with the boys, using the same rules, and, eventually, a single-class post-season tournament.

“When I look at wrestlers, I see work-ethic, technique, power, passion and drive,” said Jon Trenge, a 3-time NCAA All-American who started the Athena Girls Wrestling club in the Lehigh Valley. “Gender is irrelevant.”

Those within the sport are taking notice, too. The Pennsylvania Chapter of the National Wrestling Hall of Fame stepped up to the plate with a $10,000 donation to PAUSAW, earmarked specifically for the promotion of girls’ wrestling in the state.

“We all have immense pride in Pennsylvania’s status as the top state in the country for wrestling – at least for the boys, and men’s sport,” said Hall of Fame director Lloyd Rhoades. “Pennsylvania is just getting started with the growth of girls’ and women’s wrestling and we all want to see prominence in our state for the female side of the sport.”

At the end of a long day of spirited, but friendly competition, it was time to crown the champions in the 12 high school weight classes. The finale had all the pomp and circumstance of the boys state finals the day before in Hershey—a Parade of Champions replete with music, smoke machines and lighting effects, and big medals and jackets supplied by MyHouse for the champs. PA-Wrestling.com was on hand for a video broadcast, with former women’s World Team member and current Delaware Valley women’s coach Leigh Jaynes-Provisor doing color commentary. The event was live streamed by PA-Wrestling.com (BILL RUDICK for MediaNews Group)

Southeastern PA was well-represented on the medal stand, led by Pottstown High School, with four wrestlers finishing in the top four. There was an All-Delco final at 147-pounds. Philadelphia’s Beat the Streets program had a pair of medalists, while Souderton, Hatboro-Horsham, Harry-S. Truman, Downingtown East, Academy Park, Boyertown and Haverford High School all had at least one on the medal stand, along with another Hatboro native now wrestling for the first all-girls wrestling team in PA, Wyoming Seminary.

The championship finals kicked off at 101-pounds, where Governor Mifflin’s Jayleah Pletz broke open a scoreless match against Saegertown’s Kayleight Steinerin the second, punching in a bar and working a tilt for three nearfall. Pletz then clinched the first gold of the day, running a bar for the pin in 5:35.

Andie Przybycien from Fort LeBouf took home the 108-pound title Up 2-0 in the third. Przybycien shot a single for two and two backs to top Keira Koehler of Greenville 6-1. Caitlin Walker, who wrestled for Upper Moreland High School before heading to Wyoming Seminary, was one of those few dozen girls back in 2014. Walker won the championship at 115-pounds with a second period fall over West York’s Carly Gross. It was likely the last time she’ll wrestle folkstyle, as women’s college wrestling and the Olympics is freestyle wrestling.

“I’ve been here from the start and it is just crazy to see how much it’s grown,” said Walker, who will be headed to Columbia University next year, where she’ll major in Biomedical Engineering and continue training at the Regional Olympic Training Center there. “Especially in such a short amount of time. The competition has gotten better, too. It’s fun to go out with one more win.”

Monatana Delawder, one of the top girls, in the state , having won multiple national age-group titles and the only girl ever to qualify for the Class AAA South Central regionals in the boys division, takes home top honors at 122. After scoring the opening takedown against Pottstown’s Juliana Figeuroa, Delawder worked a turn with a butcher to get the slap of the mat in 1:10. Delawder did not spend more than 1:16 on the mat in any of her three bouts. Riley Stoner of Greensburg-Salem wasted no time in setting the pace in her 128-pound final against Dominica Daugherty from Montoursville, hitting a fireman’s carry to take Daughterty down to her back for a 5-0 lead after one. Stoner put the match away in the second with another feet-to-back takedown and a fall in 2:22.

Avia Bibeau from East Stroudsburg North and a recruit for the women’s wrestling program at East Stroudsburg University was a runner-up last year and moved up a spot on the podium this year, hitting a headlock for a pin in 1:30 over Bald Eagle Area’s Grace Stem in the 134-pound final.

At 140, Delaware Valley’s Lilly Shearer squared off against Central York student Alexx Ortiz, wrestling for Lancaster Alliance Women’s Wrestling. The two were in a tight battle headed to the third, with Shearer holding a 2-1 lead. Shearer took down, and worked it to her advantage, picking up a reversal and putting Ortiz on her back in the process. Shearer got the pin at the 4:17 mark. It was all Delaware County at 147, where Strath Haven’s Hannah Spielman toed the line across from Chichester’s Dymanique Jones. Spielman was in complete control all match, picking up a pair of takedowns and three near fall on the way to an 8-2 decision.

Downingtown East freshman Grace Wilaczek battled tough for two periods against Nanticoke’s Kaitlyn Pegarella, with Pegarella clinging to a 2-1 lead as the match entered the third period. But early in the final period, Pegarella hooked up a cross face cradle and earned the fall in 4:30.

“When I first started, you only saw two or three girls all year that wrestled,” said Wilaczek. “It’s actually kind of heartwarming to see how much it’s grown. It’s the highlight of my season to come here and see so many girls wrestling. This was my first time wrestling in the high school division, and I think I just need to be more aggressive and assert myself more, especially on takedowns.” Tiffani Baublitz, a junior from Kenard-Dale, has seen her fair share of national and international success on the freestyle circuit, having won both the Cadet age-group Pan Am Games and the USA Wrestling National Championships at Fargo last summer alone, added another PA state folkstyle gold to her resume. Baublitz won the 184 pound title with a first period pin against Souderton’s Trinity Monaghan.

The final contested match of the finals came at 222-pounds, with Pride’s Jorgie Evans taking on Beat The Streets (Philadelphia) Zaheeda Ahabdussamad. Evans picked up the championship with a third period pin in 4:42.