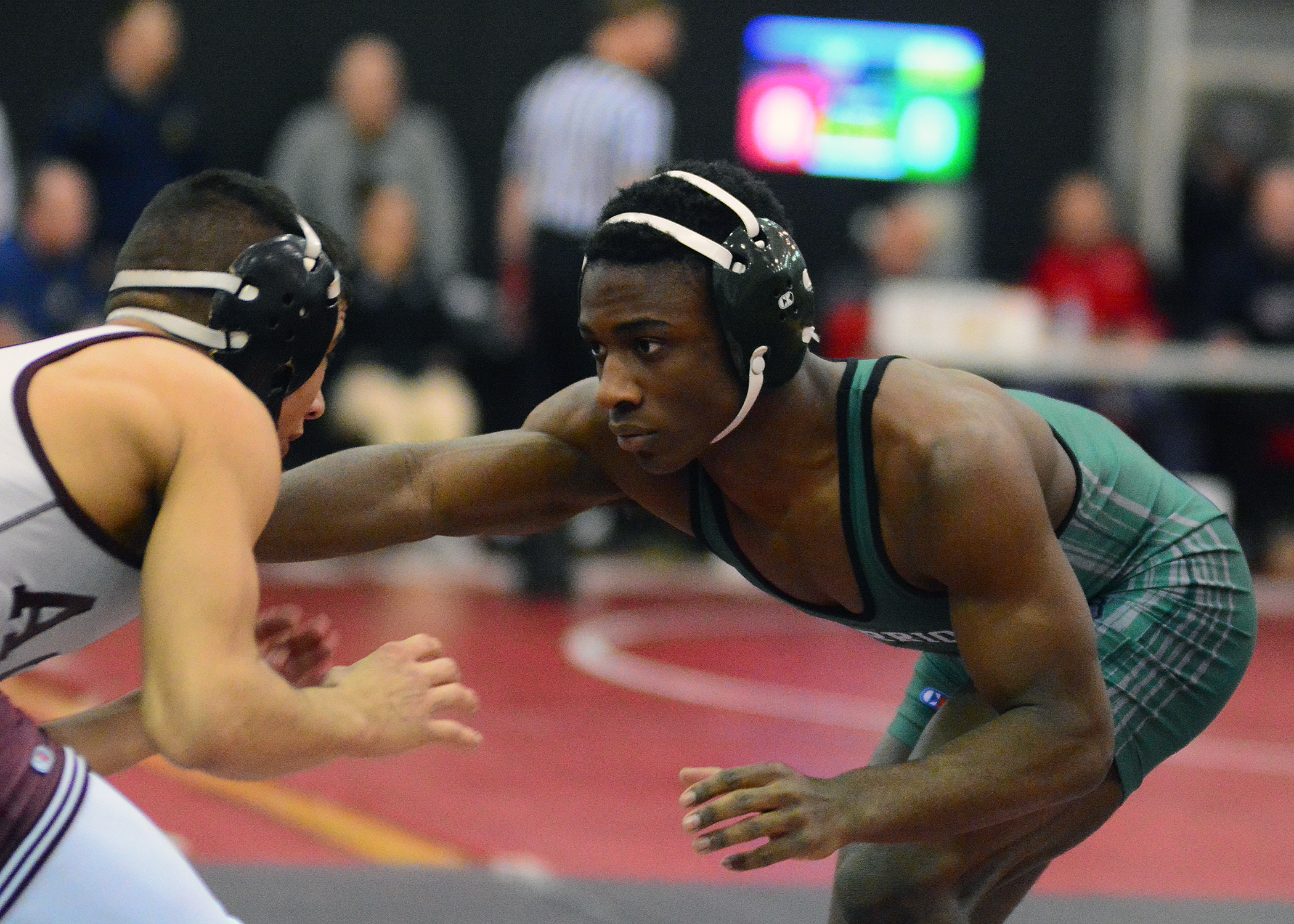 FRANCONIA — The past two years, Methacton’s Kibwe McNair has been among the top wrestlers in District 1, qualifying for states each year. But to this point, a Southeast regional title had eluded him. The drought ended Saturday night at Souderton High School, when McNair won the 138-pound title, leading a contingent of 13 area wrestlers to punch their tickets to the PIAA Class AAA Championships in Hershey next week.

McNair reached the finals with three wins, including a 6-4 sudden victory nailbiter against Quakertown’s Domenic De Falco. McNair then faced Lower Merion’s Christian Hodges in the championship round.

McNair wasted little time in establishing the tone, scoring a quick takedown, and putting Hodges on his back for a pair of near fall in the process. In the second, McNair chose down, and broke loose for one. But Hodges took advantage of McNair being briefly out of position, and cut the lead to 5-2 with a takedown.

Hodges opted to start neutral in the third, but McNair took a shot, driving Hodges to his back once again. This time, McNair made sure there would be no possibility of a comeback, getting the pin at 4:23.

“Last year I lost a close match to (eventual champ) Tyler Williams in the semis, so it feels pretty amazing to get my first regional title,” said McNair. “I think the way I’m wrestling right now, I’m wrestling well enough to go with the best guys in the state. I have a goal of coming home with a medal next week.”

McNair, a Kutztown University recruit, had a game plan for Hodges, who was coming off an exciting semifinal win where he edged North Penn’s William Morrow 3-1.

“My plan coming in to this weekend was to be the one to set the pace,” said McNair. “I knew if I came at guys with a fast pace and kept it for six minutes, no one was going to be able to stick with me. Once I got the lift and started driving on that second takedown, I knew I was getting a pin.”

McNair will be joined in Chocolatetown by teammate Roman Moser, who rebounded from a quarterfinal loss to come back through the wrestlebacks and place fourth.

For the Colonials, it is a pair of big men to punch their ticket to Chocolatetown, senior 220-pounder Paolo DiSanto and sophomore heavyweight Mike Miller.

DiSanto reached the semis with a pair of wins Friday night—a fall over Perkiomen Valley’s Eli Johnston, and then a 3-2 decision over Logan Flynn of Hatboro-Horsham. Saturday morning, DiSanto clinched a spot in the championship final with three takedowns in a 6-3 decision over Pottsgrove’s Zach Van Horn.

“I need to get a little tougher on top, but I think I’m wrestling pretty well right now,” said DiSanto. “It’s great that both me and Mike are moving on. We work each other hard in the room every day.”

In the final, DiSanto suffered his first defeat of the season, falling to Downingtown West’s Chase Melenik. Melenik notched three first period takedowns before getting a pin in 1:11.

Miller was in a doozy of a semi-final at 285 against Council Rock North’s Max Harar, tied 1-1 late when the Colonial shot in on a blast double, taking down Harar to his back, and getting the slap of the mat at the 5:20 mark.

“I’m just a sophomore, so I am really excited to know I am going to states,” said Miller. “It was close, but I noticed he kept standing up straight. So I just waited for him to do it again, and when he did, I just blasted right through him. Once I had him on his back, I knew there was no way he was getting of it.”

In the final, Miller ran into a buzzsaw in Sun Valley’s Hunter Catka, who is the top ranked 285-pounder in the country. Catka, 38-0 on the season, won by fall in 3:33.

It marks the first time since John Michael and Justin Staudenmeyer both qualified in 2011 years ago that the Colonials qualified two wrestlers for the state tourney.

“Those guys at the end of the line-up has been big for us all year,” said Coach David Luthy. “It is pretty mazing to have two going through, and hopefully they will help each other get over the hump and on the podium next week.”

William Tennant’s TJ England earned a return trip to states at 138, after making a second period escape hold up as the difference in a 1-0 decision over Strath Haven’s Chase Barlow. England dropped his championship finals bout to Neshaminy’s Zac Martin, 6-0.