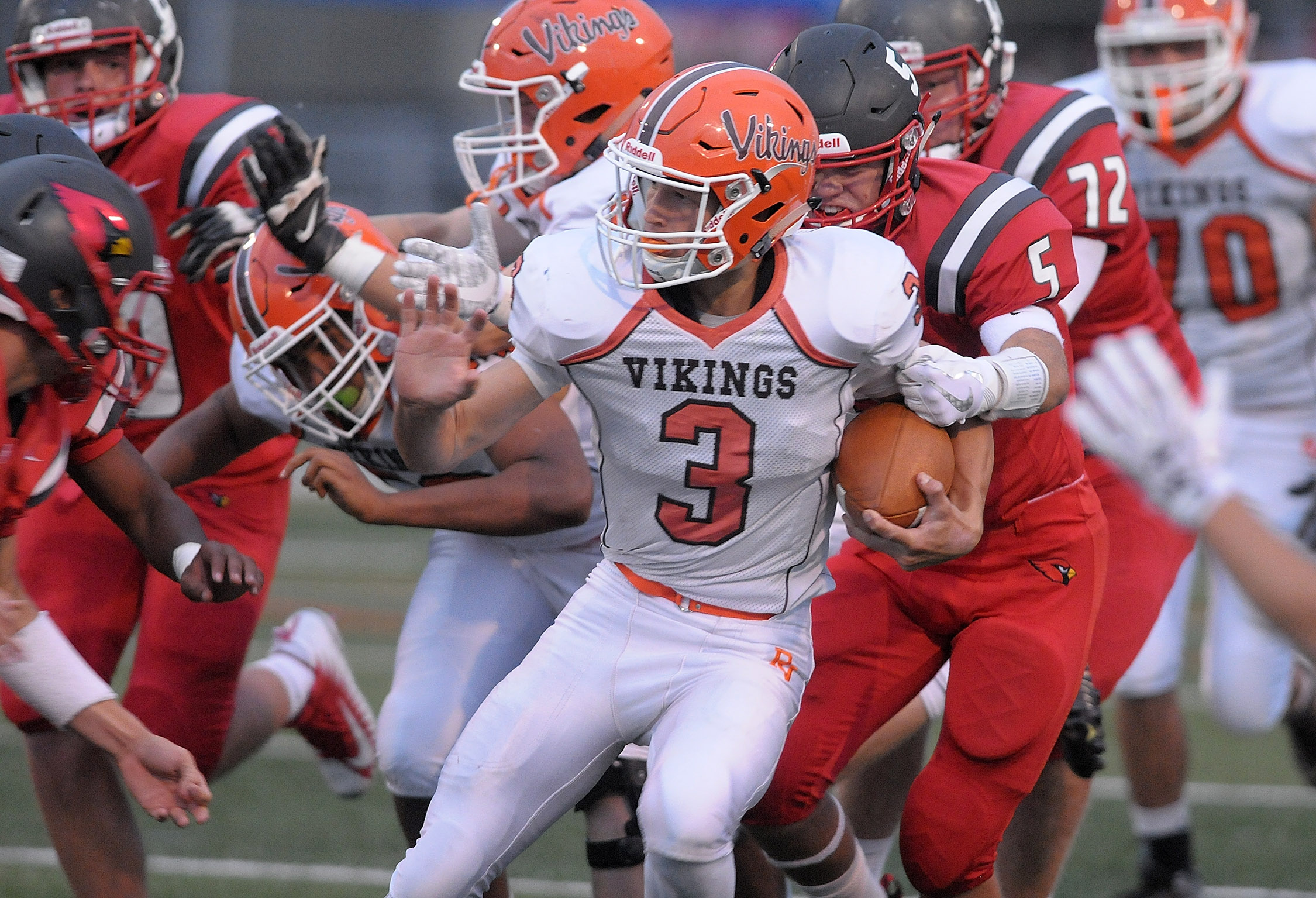 UPPER DUBLIN >> The only thing that ended up slowing down the Perkiomen Valley offense Friday night was halftime. But it wasn’t enough to stop the Vikings for moving to 2-0.

After capping the first half with four consecutive touchdown drives to take a 28-9 lead on Upper Dublin, PV’s attack lost it groove and managed to collect just three points in the final 24 minutes.

“I think we just had a nice pace going. We were in a rhythm. I think we had them off balance a little bit in the first half,” Perk Valley coach Rob Heist said. “And then they made some corrections at halftime. And we had a hard time getting out of own way there in the second half.”

While the offense stalled out, the Vikings’ defense kept the host Cardinals in check and Perkiomen Valley came away from the non-league matchup with a 31-9 victory.

“We didn’t work too hard this past week, we kind of just thought, beginning of the season we were a little high on our horses,” Perk Valley’s Alec Jackson said. “But I think after this game we realized we need to step it up. Definite make changes and do better.”

Perkiomen Valley (2-0), ranked ninth in the PaPrepLive Top 20, routed Downingtown West 38-0 in its season opener but had a slow start against UD – the Vikes’ first two possessions ending in a turnover on downs and punt.

Down 3-0, a turnover got Perk Valley going – Kevin Delacruz’s interception setting the Vikings up at the Cardinals 13. Jon Moccia found the end zone on the next play with 12. 4 seconds left in the first quarter.

“I wouldn’t say we had them but we were in a good spot, let’s put it that way, until we turned the ball over down here,” Upper Dublin coach Bret Stover said. “That just seemed to flip it. And they’re that good that they just jumped on us.”

PV quarterback Cole Peterlin toss a pair of touchdown passes, extending the lead to 21-3 before a Malik Bootman 45-yard TD run had Upper Dublin (0-1) with 21-9 with 5:11 to go in the half.

But the Vikings answered with a 12-play, 70-yard drive Moccia finished by crossing the goal line from two yards out 19 seconds from intermission and PV had a 19-point edge.

“I’m pleased. We got a win and we have a young team so we’re going to have these little things that we’re going to correct in the early going here this season,” Heist said. “I can’t be unhappy. I think we played well especially our defense I thought was awesome tonight, really flying to the ball and tackling well.

“But offensively we just have to keep improving, we have to keep working and getting better every week. We got a real challenge coming up this week against Pennridge.” The teams’ first seven drives of the second half ended in punts before PV’s Max Hand stopped the eighth with an interception. The turnover led to the half’s only three points, which came on a 32-yard field goal by Mike Weir at 3:15 in the fourth.

Peterlin was 20-of-28 for 166 yards – 121 in the first half – and two touchdowns while Moccia ran 14 times for 77 yards and two scores as the Vikings won their first two games for the third straight season.

Bootman had a game-high 98 yards and a touchdown on 12 carries for Upper Dublin, which has a new look from the Cardinal teams’ that won three straight Suburban One League American Conference championships and the 2015 District 1-4A title.

“We had basically on offense, it was eight new starters and nine on defense,” Stover said.” Guys just a little bit of Friday night lights and it was faster than they’re used to. And they caught up, though.”

In the first quarter, Julian Gimbel connected with Jack Jamison for 35 yards down the PV 4 but the Cardinals could not get into the end zone and Chris Barbera’s 19-yard field goal made it 3-0 at 4:57.

“Seven would have big for us confidence-wise,” Stover said. “Credit to them, they stuffed us, stuffed us three times.” Backfield pressure lead to Delacruz’s interception as Gimbel tried to throw a pass while in the grasp of Brian Fehr. The pick put the Vikings at the Cardinal 13 and Moccia scored the next snap.

Perkiomen Valley grabbed a 14-3 advantage when Jackson hauled in a Peterlin pass for a 24-yard touchdown at 9:27 to cap a four-play, 48-yard drive.

“Usually I’m more of a short pass kind of guy,” Jackson said. “I think it was a freak thing — no one saw me coming cause I’m taught to just look for blocks and stuff.”

The Vikings took a 21-3 lead at 5:29 as Isaiah Domine caught a 2-yard touchdown pass from Peterlin to finish a six-play, 56-yard drive.

Lucas Roselli returned the ensuing kickoff to the PV 45 and on 1st-and-10 Bootman found space down the sideline to run to the end zone at 5:11.

The Vikings, however, answered by going 70 yards on a dozen plays for their fourth touchdown of the half. Facing a 4th-and-2 from the UD 27, Brendan Schimpf took a Peterlin pass 17 yards down to the 10. Three plays later, Moccia scored from two yards out.