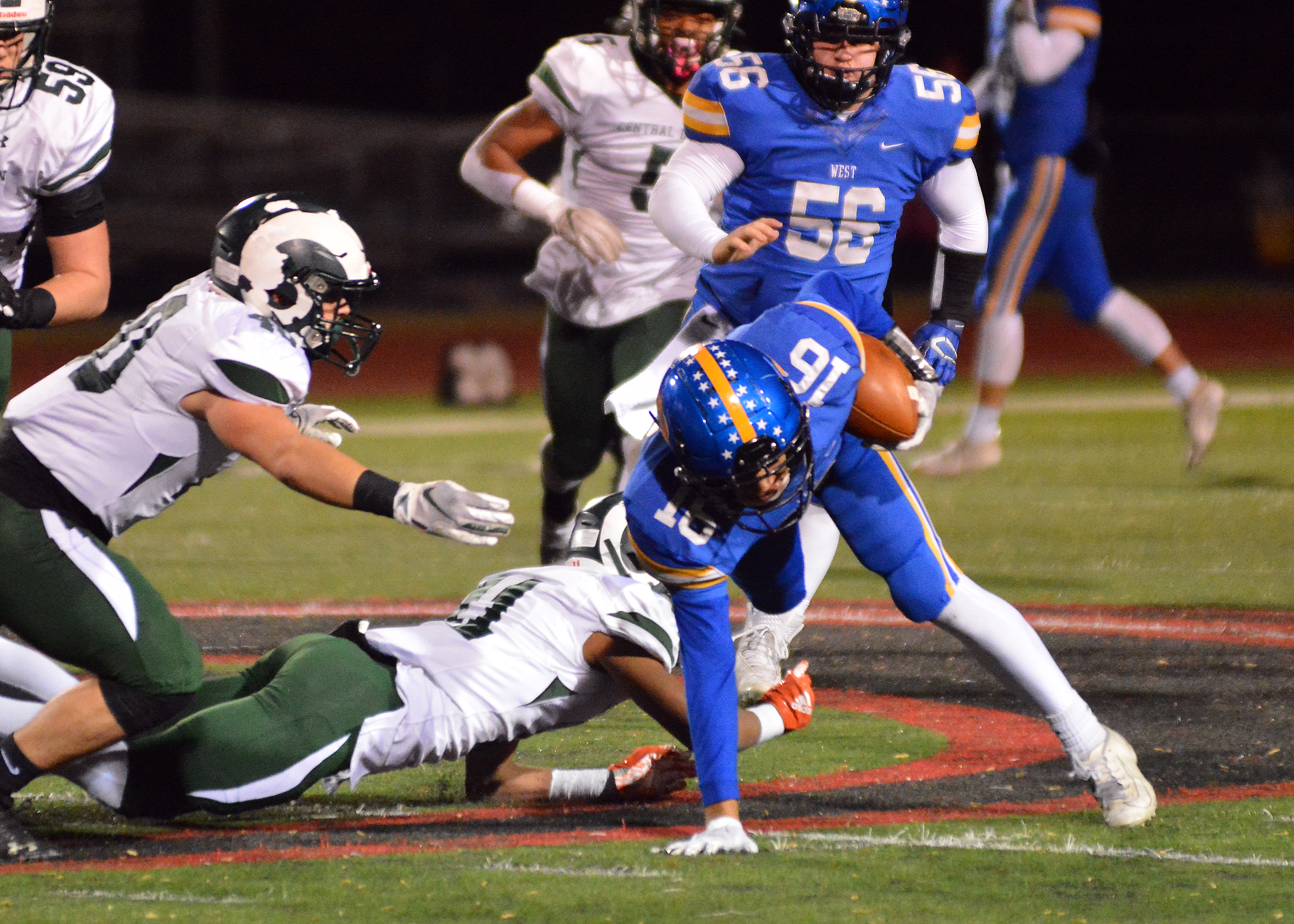 COATESVILLE—All year long, the Whippets have put up the points, with an offensive attack as effective and deadly as any in the state. Behind quarterback Will Howard, a Division I recruit headed to Kansas St, and plenty of weapons in the likes of Tyriq Lewis, Will Mahmud, Julian Williams and Sean Pelkisson, among others, Downingtown West had been scoring like crazy in the post season, averaging 50 points a game.

Friday night, in the PIAA 6A semi-finals, Central Dauphin, known for its stingy defense that has had seven games allowing 10 points or less, showed it can do a little bit on offense as well. The Rams opened the game running, and kept on churning out the yards on the ground. By night’s end, Central dauphin had amassed 425 yards on the ground, led by Tim Lewis’ 264.

West wasn’t exactly completely flummoxed, though. Howard threw for 295, and the Whippets ran for another 121. The end result was a scoreboard operator exhausted from a workout as the two teams combined for 109 points in the 65-44 Central Dauphin victory.

With all the offensive fireworks, as the game headed to half time, it seemed like a missed extra point by the Rams in the early going could just spell the difference in the game. Instead, it turned on two huge defensive plays early in the third quarter.

Central Dauphin headed into the break holding a 23-14 lead, but the Downingtown West faithful had to be encouraged by the fact that the high powered Whippets would be getting the ball first in the second, having won the coin toss and deferred.

On the first play of the possession, Howard rolled to his right, and let go with a short pass. But Rams outside linebacker Lance Turner stepped in front of it, and might have had a pick six if not for Howard’s efforts making a stop short of the goal line. The Rams scored a play later.

After a nice kick-off return, West set up just short of midfield, looking to get right back in the game, but Central Dauphin dashed those hopes with another interception, the 20th of the season by the Rams. Once again, the turnover resulted in a score, and all of a sudden the Whippets were looking at a three touchdown deficit it would be unable to overcome.

Howard and the rest of the Whippet offense kept putting up the points, notching four touchdowns the rest of the way, but each time Central Dauphin answered back with one of their own. West simply could not match those two big defensive plays to allow their offense to get them back in the game.

West’s season comes to an end, but what a ride it was. The Whippets won a share of the Ches-Mont, then captured the District 1 title with a huge win over rival Coatesville. At 13-2, the Whippets became the first team in Downingtown history to reach 13 wins in a season.