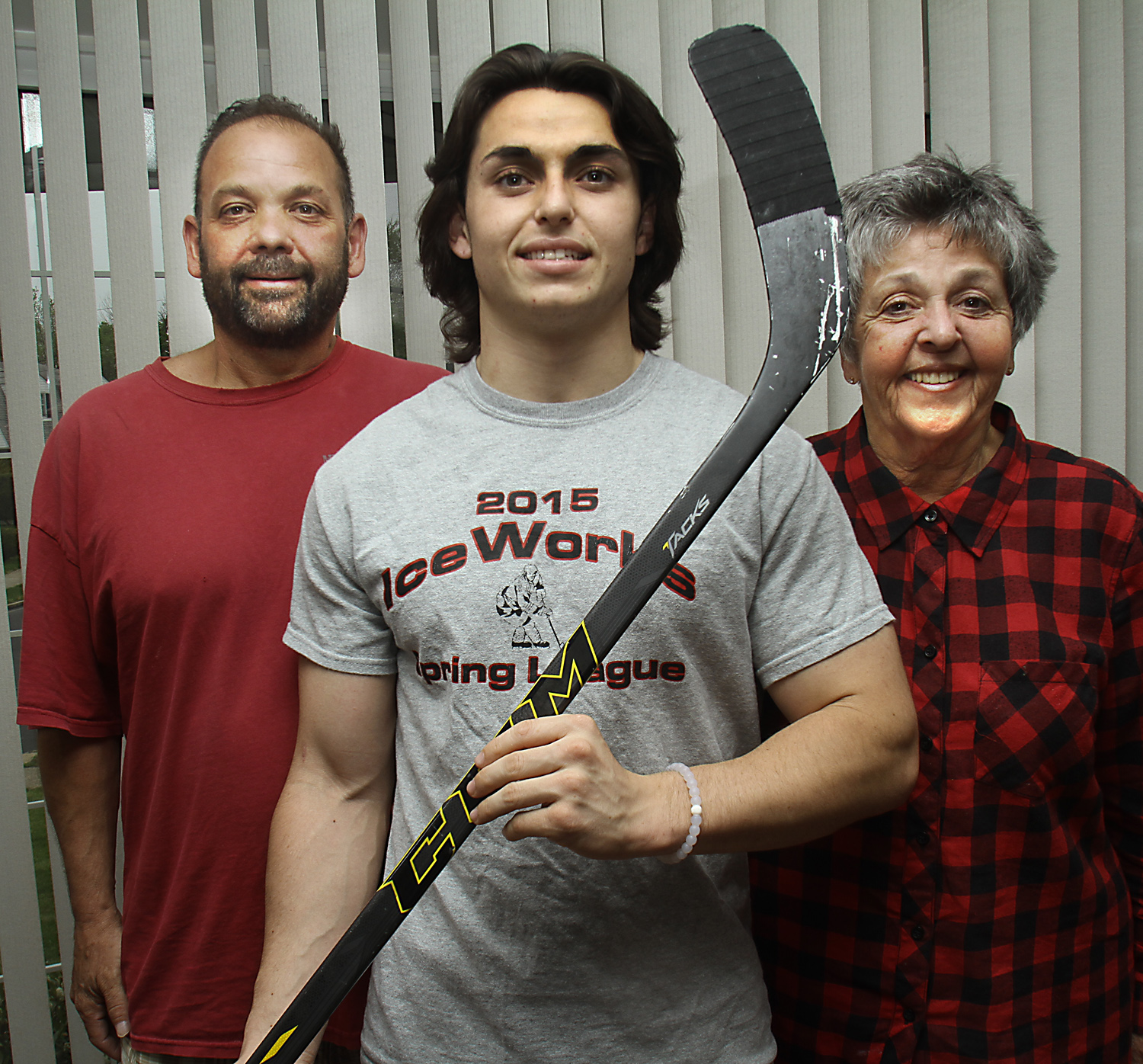 RIDLEY TWP. >> It was a signature Nick Catona goal. As a young man short on words, the senior had a habit of arriving unannounced in dangerous scoring areas.

The score stood 3-3 in overtime of the 2016 Central League championship game between Ridley and Springfield. Catona helped the Green Raiders reach OT with a goal and the game-tying assist.

Standing among the rabid Cougars faithful, Tony Catona, Nick’s older brother, hit record on his phone’s camera as Nick broke down the left wall early in the extra period. Two Springfield defenders buried him in the corner, leaving the winger out of the play.

Tony’s home video captures the aftermath of that collision. Nick shows up again at the 5-second mark as he glides uncovered to the side of the net. Louder than he would ever shout, he bangs his stick on the ice three times. Michael Giampapa, the silky smooth center on Ridley’s top line, feathers a pass across the crease and Nick slams it home to trigger pandemonium.

“I’m an very emotional person,” says the former Quebec Nordique. “I may not look it. I was crying. I’m a human, too.”

The goal-scorer induced the tears as much as the championship did. Catona lost his mother to cancer in December. Margaret “Maggie” Catona was 47 years old.

“I usually talk to the guys after every game. I let Nick speak first,” recalls Charbonneau. “He did it for his mother. That’s the first thing he said. I knew she was watching.”

Catona’s constant smile hid the emotional strife of the past two years. Maggie was diagnosed in March of 2014 and struggled in her fight against the deadly disease.

“She was a social butterfly,” remembers Tony of his step-mother. He and Nick share a father. “Wherever she was, she was the life of the party. After she was diagnosed, she didn’t want to go anywhere. It was really difficult to see.”

Nick coped by staying busy. He spent time with his friends and girlfriend and frequented the gym. During the fall and winter, he relished his time at the rink.

“On the ice, it’s like releases. No stress or anything,” Catona said. “It’s having fun. Every time at practice, it’s always fun. I never get mad. I enjoy it all.”

His parents also made sure to keep his life as normal as possible.

“His mom, she made sure to give him a hug every time he left the house,” says Nick’s father Tony. “We tried to lessen it all for him.”

You would have never guessed anything was wrong. Those close to Nick knew better.

“He was not (fine),” said Charbonneau, who coached Nick since he was 12. “He cried in front of me a couple times.

“When a kid cries to you, what are you supposed to say? It’s going to be alright? It’s not alright.”

The Ridley Ice Hockey Board of Directors did all it could to help the family. Board members put up posters and delivered food to the Catona home. Nick’s teammates were invaluable pillars as well. The team wore helmet stickers with Maggie’s initials, “MC” imprinted on a green heart.

When it came time for the Green Raiders’ holiday gift-card exchange, every player gave his card to Nick.

Meanwhile, Tony, one of Nick’s four brothers along with Gary, Daniel and Mathew Mariotti, became a fixture at Ridley games.

“This year in particular, I wanted to make sure I got to as many games as possible,” Tony said. “(Nick) internalizes a lot of his feelings. I wanted to be there to support him.”

Tony tweeted updates and recorded videos. On Dec. 11, he and his father planned to meet at IceWorks for a big game against Haverford.

Instead, the elder Tony went to be with his wife in the hospital. Nick scored midway through the third period in a 5-1 Ridley win. Tony got that goal on video as well as a big hit Nick delivered. He sent the clips to his father so that Maggie could watch.

“We were at the hospital all day. We were trying to tell Nick, you’ve got to show some emotion,” said Tony. “He just exploded. It was bad.”

A collection of his teammates and friends met the family at the hospice center. Every member of the Green Raiders went to the funeral.

“I called him and he said three words,” Charbonneau said. “I said, Nick, you don’t have to come to the game.”

Ridley was set to play Penncrest on Dec. 18, five days after Maggie’s passing. “He said, ‘No, I want to be there for my teammates.’”

Catona scored a hat trick against the Lions. As Nick excelled on an individual level, he became an inspirational figure for Ridley. The Green Raiders closed the regular season with a record of 16-1-1. They wanted to win for Nick, his family and Maggie.

“When things like this happen, it brings your team even tighter,” Charbonneau said. “They were working their butts off for Nick.”

At the same time, Catona continued to put the puck in the net. Playing alongside Giampapa, who joined his winger on the 2016 All-Delco Team, Nick buried 39 goals and added 29 assists.

That one-two offensive punch was the impetus behind Ridley’s postseason push: a passer and a shooter, two players who let their games do the talking.

“We always had momentum going at the same time,” Nick said. “Whenever we needed a goal, Steph would rely on us.”

Charbonneau never needed the pair more than in the Central League championship, where the Green Raiders faced the only opponent to defeat them all year. While the coach gave the rousing pre-game speech, Nick’s father stole him away for some inspirational words.

“That’s when I told him, ‘Mom’s watching,’” Tony Sr. said. “You better help your team out tonight.”

Nick went out and delivered a heroic performance: an assist to Giampapa and two goals, including the overtime winner. As he left the ice that night both Tonys, his dad and brother, greeted him with hugs.

“I was just happy. That was one of the best moments. I was just so excited. I didn’t worry about anything else,” Nick said. “It was kind of hard after she passed. I was trying to get back together. All she did was want us to be successful. I tried and I did.”