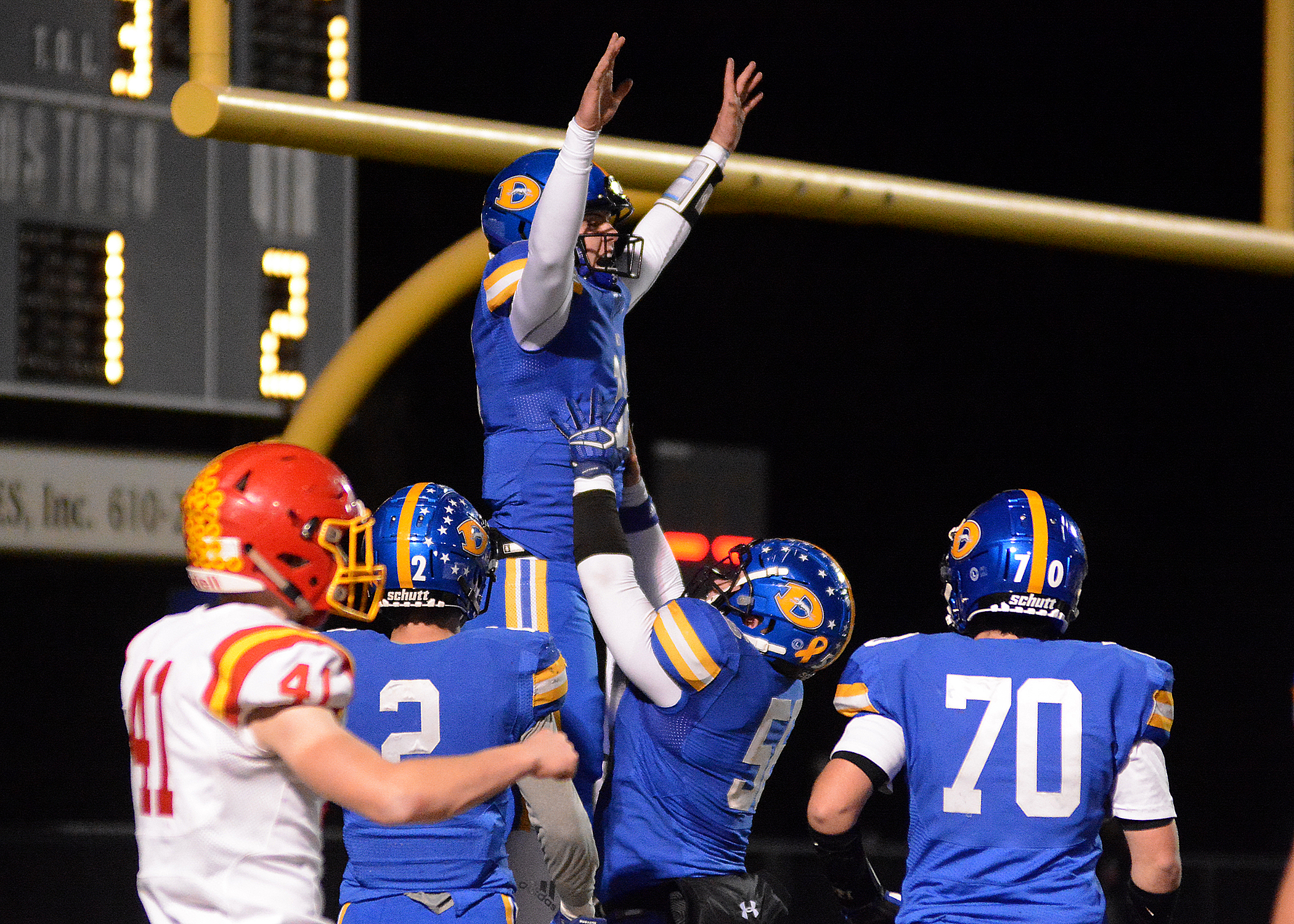 DOWNINGTOWN—With two prolific offenses squaring off in the District 1, Class 6A semi-finals in Haverford and Downingtown West, everyone expected a lot of points on the board. No one in the capacity crowd left disappointed, as the two teams combined for 841 yards of offense and 13 touchdowns, with the Whippets advancing to next week’s finals, holding off a furious Fords comeback bid to win 49-42.

With the win, West moves on to the District 1, Class 6A finals, where they will face a familiar foe in Coatesville, a 48-27 winner over Garnet Valley Friday night.

“It’s just sick,” said West defensive end Max Hale on moving on to the championship game. “We were confident through the whole game, no matter what the score was. We’re all brothers and we’ve got each other’s backs.”

The Whippets’ balanced attack proved to be the difference. Quarterback Will Howard threw for 252 yards on 14-24 passes, connecting with six different receivers, including a pair of touchdowns to Will Mahmud, and another 52-yarder to Jake DePitetro. Meanwhile, West ran the ball for another 250, led by Tyriq Lewis, who churned out 136 yards on 27 carries, along with two touchdowns.

“If we’re running the ball well, great, if we need to pass, great. We will do what it takes to get yards and score touchdowns,” said Howard. “Tonight we got it done in all aspects of the game. Having that balanced attack is tough to defend. The line did a great job up front, and Tyriq ran the ball great.”

Lewis bailed Howard out on possibly his only mistake of the night. Haverford came up with a big interception right at the line, and, at the very least, would be getting the ball in excellent field position. But Lewis was able to punch the ball loose, and West recovered, then went on to score to go up 35-7

“I told him he saved my butt,” said Howard. I made a bad decision to throw there, but having a guy like him there to have my back is great. But that is this whole team. We all know we’ve got each other’s backs.”

One big question entering the contest was the health of Fords’ quarterback Trey Blair, who suffered a hip pointer in last week’s win over Downingtown East. The answer to that was that he was going to be just fine.

Though the Fords’ star was seen limping a little towards the end of the game, it didn’t stop him from leading all rushers with 217 yards on 17 carries, two going for touchdowns. Blair had a couple of huge runs, including a 74-yarder that set up the Fords first score of the game.

“He is just amazing,” said Ford’s coach Joe Gallagher. “He came in here 75-percent at best and look what he did. He is, without question the best player I’ve coached in my 28 years. Might be one of the best players I’ve been on the field with.”

But for a couple of big plays from Blair, this very well could have been a Mercy-rule game by halftime. West’s defense was about as tough as you could want in containing a talent like Blair.

“We knew that Blair was going to make some plays,” said Howard. “He’s an amazing talent that is going to do big things in college, so getting to play with a 35-7 lead is a testament to our defense. They simply weren’t going to have enough time to come back.”

Down 42-14 at one point, Haverford never once hung their head or let down. And they darn near came all the way back, scoring four of the last five touchdowns of the game.

“I can’t express in words how proud I am of the effort these guys put forth,” said Gallagher. “West is one of the best offensive teams you’re going to face, but this team just kept answering and coming back. We don’t like the loss, but these guys played with guts and all the effort you can ask for.”

As West began to stop Blair on the ground, he went to the air, twice hitting tight end Chris Dempsey for huge gains, including a 52-yarder to set up a score from Blair and another to Dempsey for a 21-yard

Following Blair’s keeper for a touchdown, Haverford recovered an onside kick, and made it a one-touchdown game when Blair hit Will Higson for a 9-yard touchdown.

But West recovered the next onside try, and ran out the clock for the win.

“We had to modify what we did to try to get (Blair) to give the ball to someone else, but he still found his spots,” said West coach Mike Milano. “But my kids played their brains out in the first half. We’re looking forward to playing for a district title next week.”