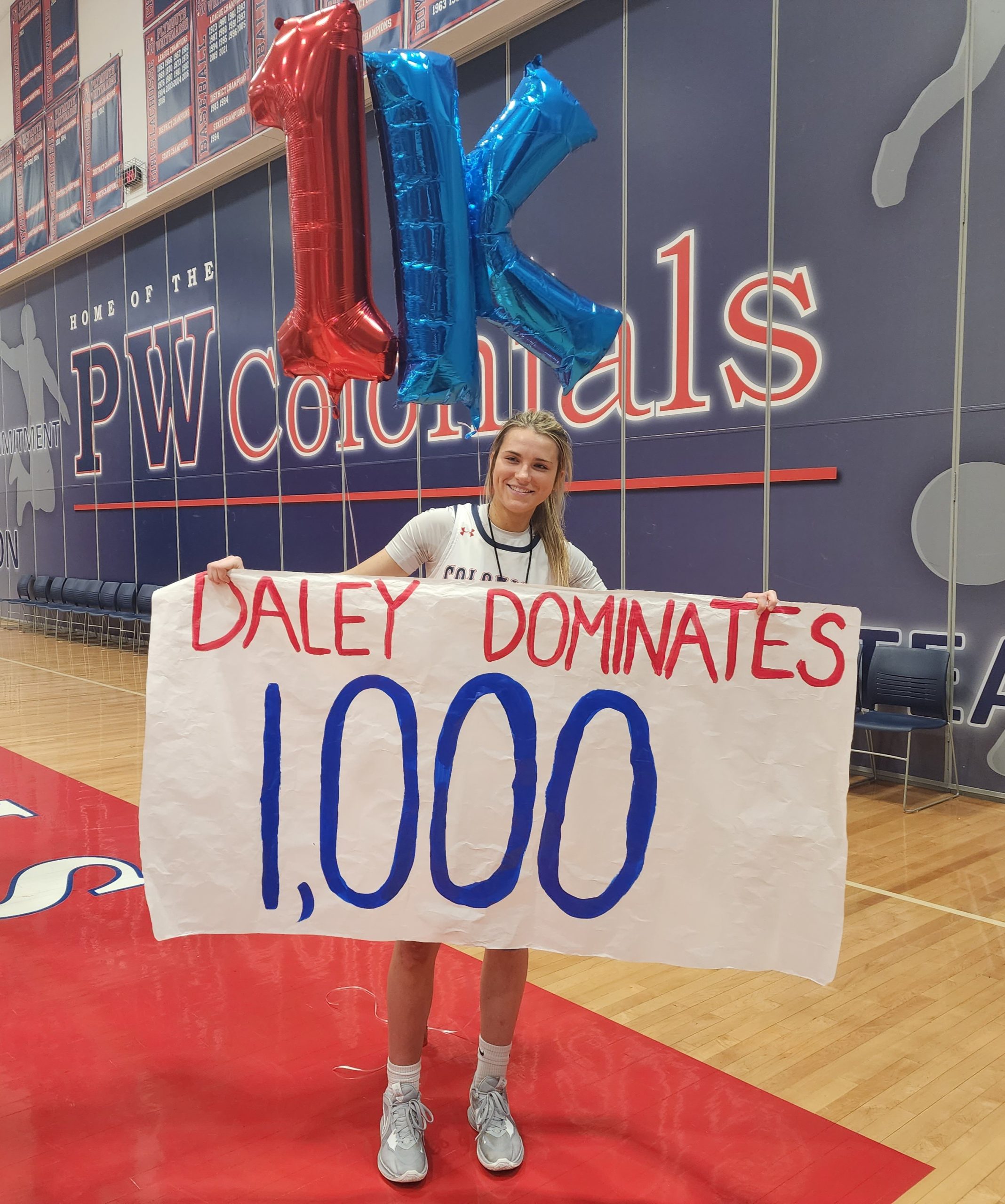 Plymouth Whitemarsh senior Erin Daley scored the 1,000th point of her career during a game against Abington on Tuesday, Jan. 24, 2023. (Ed Morlock/MediaNews Group)

WHITEMARSH >> You couldn’t write a better script for Erin Daley.

In a game against Plymouth Whitemarsh’s biggest rival that will likely determine the league champion, the senior forward reached a career milestone and made two game-deciding plays in the final seconds of a one-point win.

Daley scored her 1,000th career point in the second quarter against Abington Tuesday night, but it was her 1,006th point that decided the outcome. She put up a shot from just inside the free-throw line with eight seconds left. After a bounce off the rim, backboard and rim again, the ball went through the net with less than six seconds remaining. When Abington needed to go the length of the court in 3.8 seconds, Daley poked the ball away to secure a 49-48 Suburban One League Liberty Division win at Plymouth Whitemarsh High School.

“I was getting talks, talks, words thrown at me all day saying, ‘It’s your night,'” Daley said. “I was just focused on the game and trying my best to get the win. To be able to get my thousandth point and the game-winning basket, it was a great night for me overall.”

“It’s not easy to score against that team tonight,” PW coach Dan Dougherty said. “I’m just elated for her. She’s very deserving. Anna McTamney (2021 grad and 1,000-point scorer) is here tonight and Erin and Anna are so similar of player. A thousand points, going to finish with 800 rebounds in her career, she’s a kid that’s started since Day 1 of her freshman year because her size and strength and ability to play defense is what puts her out there. Now this year she’s been able to shine a lot more offensively.”

The Colonials (15-2, 11-1 SOL Liberty) battled back from a six-point deficit in the final minute of the game. An Abby Sharpe basket made it 47-43 with 42.9 seconds left before Daley grabbed a steal on the inbounds pass and got fouled. She missed both, but Sharpe grabbed the offensive rebound and her putback made it 47-45 with 38.5 seconds remaining.

Abington missed the front-end of a one-and-one before the rivals traded turnovers. PW freshman Kenna Winland was fouled with 16.9 seconds left and hit both free throws to tie the game, 47-47.

“(Winland) shoots big free throws in practice all the time,” Dougherty said. “I thought she saved us tonight. I thought Kenna Winland just saved us. We needed a fifth kid that could go out and defend Abington and could handle the situation and the pressure and she did… Getting steals, getting rebounds – the moment wasn’t too big for her and we’ve been searching for a kid that would be the difference.”

“It just feels great,” Winland said. “After all this time in practice where I’m always in that position, finally getting to reassure myself that I can do that and that I’m progressing – it just feels really good.”

“Kenna’s a freshman but she shows no fear,” Daley added. “She will not back down from a fight at all. It happens all the time in practice, she’s the last one up when it comes down to our free throw competition at the end that we do and she somehow, for some reason, like Coach D said she gets it every time where if she makes it, it’s done and we win. If we lose, we have to run and play it all over again. Kenna has that confidence. She was sent up to the free-throw line and I knew she was about to make both of them. She has the confidence and we all have the same confidence in her.”

Mikiaya Durham was fouled on the ensuing possession and split her free throws, putting the Ghosts (14-4, 10-2 SOL Liberty) ahead, 48-47, with 15.3 seconds to go. PW grabbed the rebound on the second shot and called timeout with 14.4 seconds left.

Sharpe took the inbounds pass from under her own basket and raced upcourt. She kicked to Daley at the left wing, who drove into the lane and put up the go-ahead shot. Daley stripped the ball on Abington’s final play before they got past their own foul line.

Abington was short-handed down the stretch, playing without senior and program all-time leading scorer Cire Worley. She fouled out with 1:18 left and a 46-41 lead. She picked up her fourth foul with 1:09 left in third quarter and a 40-33 lead. She came back with 4:36 to go in the fourth and a 40-39 lead.

“If that’s the last time we play them,” Dougherty said, “that’s a tough way to go out. I felt bad for (Worley) in that she’s such a great player. I don’t want to beat that team with her on the bench. It’s out of everybody’s control, but I told her that. She’s a great kid and a great player. We’ve enjoyed going against her.”

When Worley returned in the fourth, Piper McGinley and Durham sandwiched three-pointers around a Winland inside jumper to extend a one-point lead to five, 46-41.

The win gives Plymouth Whitemarsh a one-game lead over Abington and two-game lead over Upper Dublin in the SOL Liberty standings with four games to go. The Colonials have games against Quakertown (9-8), Hatboro-Horsham (6-10), Upper Dublin (11-5) and Wissahickon (5-11) remaining.

“Definitely not over yet,” Daley said. “We have to finish strong, finish our league strong. To be able to get that win tonight – Abington beat us the first time in their gym. It was, ‘PW’s done. Not after last year’s run, never going to be the same team.’ But we’re still here and I think tonight really showed that.”

Daley became the 12th Plymouth Whitemarsh girls basketball player to score 1,000 points in the second quarter. She took a dribble-handoff from Sharpe at the top of the key and drove to the basket. Her shot off the glass went in to give her team its first lead of the game, 23-22, in the final minute of the half. The game was paused for her to celebrate with teammates and take the ball to her grandmom in the crowd.

Abington got off to a fast start. Worley, Durham and McGinley each hit a three-pointer in the first quarter to help build a 15-8 lead after eight minutes.

Worley added five early in the second quarter and Durham had two to build a 22-13 lead, but the Colonials closed the quarter on a 13-0 run to take a 26-22 advantage into halftime.

Abington went on a 13-0 run of its own in the third quarter, turning a 30-27 deficit into a 40-30 lead. Worley scored eight straight points in 48 seconds to give the Ghosts a 37-30 lead. Abril Bowser completed the run with a three-pointer to make it a 10-point lead.

Sharpe split a pair of free throws and made a basket to get within seven and AJ Avery’s three-pointer at the buzzer sent the game to the fourth with Abington ahead, 40-36.

Sharpe led the Colonials with a game-high 20 points and added eight rebounds. Daley scored 14 points to go along with nine rebounds, four assists and three blocks.

Worley led Abington with 16 points. Durham joined her in double figures with 11 points and Bowser had eight.