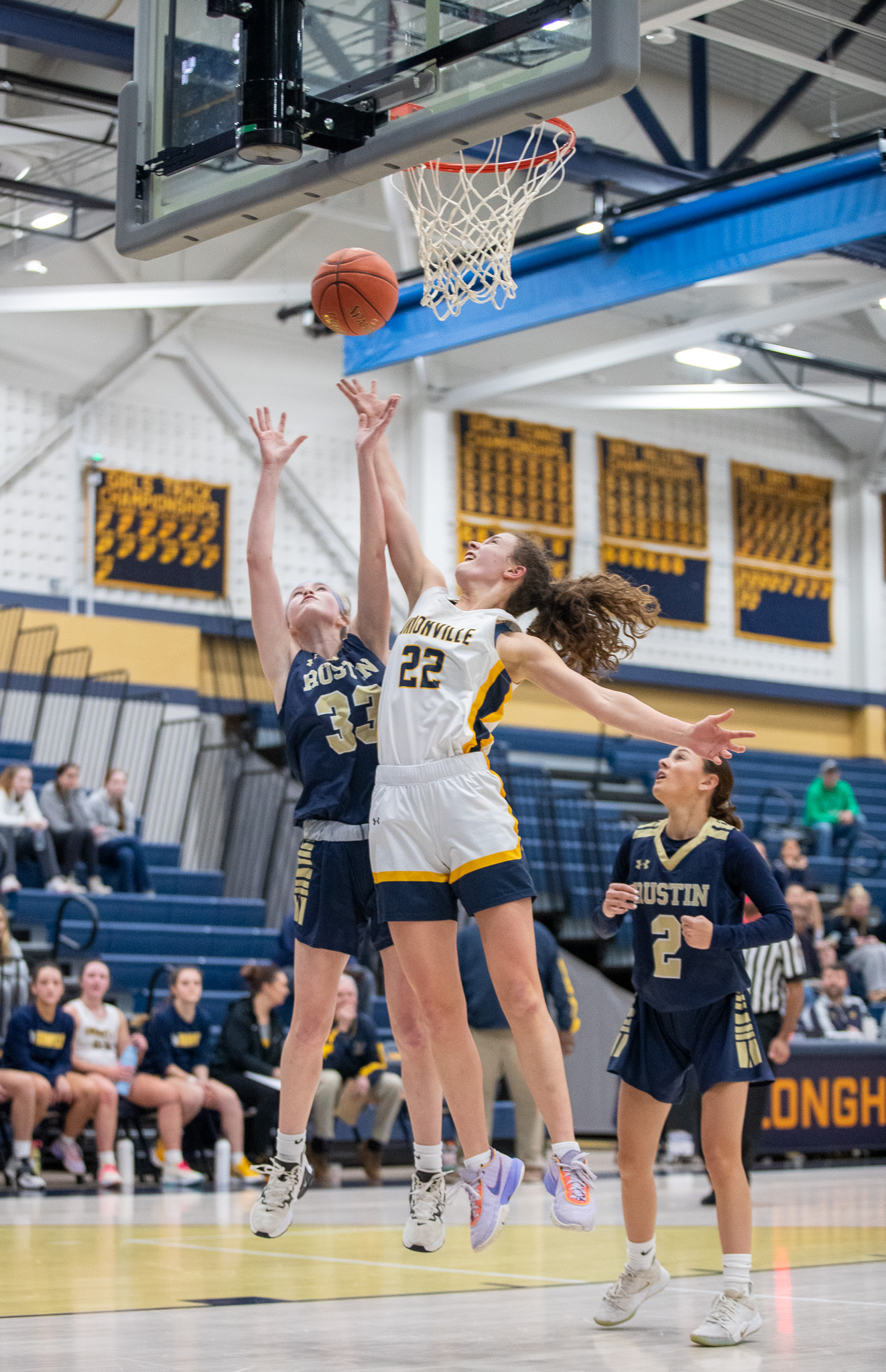 EAST MARLBOROUGH >> To paraphrase former ESPN SportsCenter anchor Dan Patrick, you can’t stop Laine McGurk, you can only hope to contain her.

Unionville did contain McGurk, but the supporting cast picked up the West Chester Rustin star, and made sure the Golden Knights’ Ches-Mont League American Division mark stayed unblemished.

Elizabeth McGurk recorded a couple of key baskets in the first half and Ava Panetta followed suit in the second as the Golden Knights prevailed in the defensive battle against the Longhorns, 44-33, on Tuesday.

“Our defense definitely did travel tonight,” said Rustin coach Lauren Stackhouse. “We did a good job of containing them. We had certain goals in mind going into the game and our girls did a really good job of executing. They did everything we asked of them. The boxing out was the key.”

Unionville coach Fred Ellzy laughed when someone compared the game to the defensive battle between the Dallas Cowboys and the San Francisco 49ers on Sunday.

“It was. It was,” he said. “They’re a good team. You can’t make mistakes. We made a bunch of mistakes early and turned the ball over. They capitalized on it and it’s hard to come back against a good team.

Laine McGurk still had a team-high 15 points, but shot just 5-of-19 from the floor. Her sister Elizabeth had 11 points and Panetta added six.
“The great part of this team is it really can be anybody that steps up,” said Stackhouse. “We’re not just a me, we’re a we team.”

Unionville (4-2 Ches-Mont American, 13-4 overall) was looking to make a statement after losing to Rustin the first time around, but that statement was not a positive one. They turned the ball over five times in the first quarter and made just two of 12 field goal attempts.

Rustin had less trouble scoring — but only slightly — as they built a 10-2 lead, thanks, in part, to a three-point play by Elizabeth McGurk, followed by a bucket from Laine. Elle Johnson hit a runner at the buzzer and the Longhorns trailed 10-4 after one.

“We were moving the ball well,” said Elizabeth McGurk. “Most of our baskets were assisted and that’s something we work on.”

Rustin kept Unionville at arms length in the second. The Longhorns got as close as 15-12 following two straight baskets by Riley Angstadt.

But, Rustin ended the quarter on a 7-0 run. Two free throws from Elizabeth McGurk, a layup from Panetta and the cherry on top, a three-pointer from Elizabeth at the buzzer, sent the Golden Knights into the locker room with a 22-12 advantage.

Unionville scored four of the first six points of the third to trail 24-16 with 4:52 left. Rustin then went on another spurt as Panetta notched a pair of baskets and had a pretty assist to Lola Flynn to complete a 6-0 run and the Golden Knights had their largest lead of the game at 30-16 with 2:47 left in the third period.

“I knew we had to get some buckets, so I just scrapped up some,” said Panetta. “I tried to stay calm and collected. Both defenses played well.”
Four straight points from the Longhorns reduced the defict to 30-20 heading into the fourth.

The Golden Knights, however, weren’t as crisp as Stackhouse would have liked.

They had trouble scoring and were loose with ball, committing six turnovers in the frame.

“We had a little bit of a lapse in the fourth quarter,” she said. “The thing is, the girls adjusted. They didn’t get rattled or hang their heads, and we did what we needed to do. We came back at them.”

Rustin had a 38-25 lead with two minutes left after Laine McGuirk scored on a fast break following a block on Unionville’s Milana Amoss.

The Longhorns tried to stay in the game, but Rustin staved them off to move to 7-0 in the American Division. The Golden Knights are three games away from a second perfect league slate, and with the win improved to 14-3 overall.

“From the beginning of the season, this team has set long term goals,” said Stackhouse. “I have a feeling they’re not going to stop until they reach those goals.”